Casa Del Maestro, located at 3455 Lochinvar Ave., was a first-of-its-kind effort in the region to provide affordable housing to teachers. The 70-unit building, owned by the Santa Clara Teacher Housing Foundation, was built using a tax-exempt bond, according to district documents. The foundation was created within the Santa Clara Unified School District.

Gillmor’s company, Gillmor & Associates, has served as the property manager for the housing complex—collecting rent and handling repairs—since it opened in 2002. But for the past two decades, state documents show the company registered only one contractor as a prevailing wage project—a paint job in 2016 that cost $225,000. 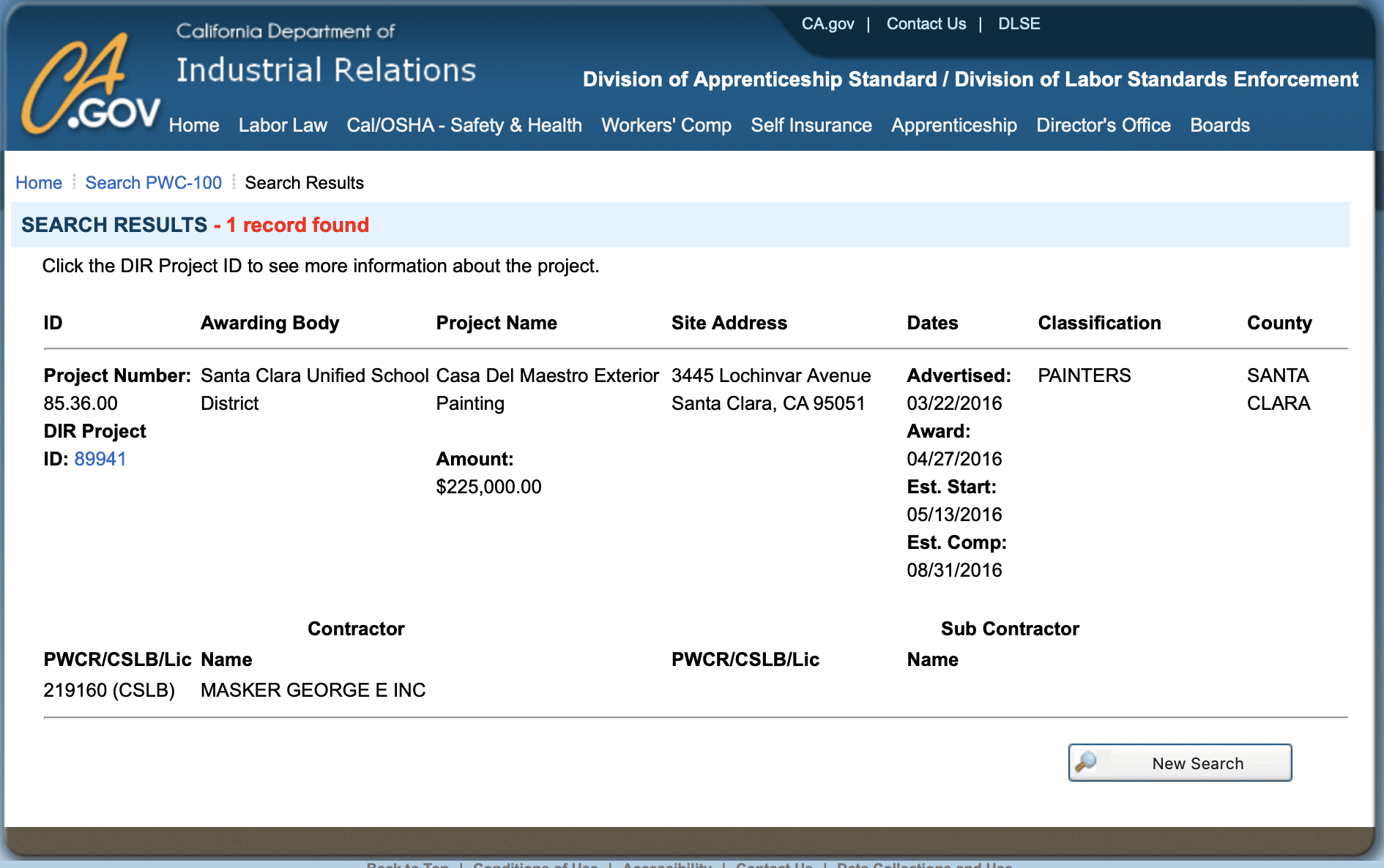 According to state law, prevailing wages must be paid to workers on any public works projects above $1,000. A ledger obtained by San José Spotlight found numerous jobs in 2017 and 2018 that should’ve been registered with the state and paid prevailing wages. A few examples include HVAC repairs by Golden Gate Mechanical, a light pole replacement by Wil-Cal Lighting and carpet replacement by Interdecor. Other work above $1,000 includes roof and gutter cleaning. None of them appeared in searches related to the project on the state’s website.

“There would be several violations here,” Mauricio Velarde, compliance director for the South Bay Piping Industry, told San José Spotlight. “If a certain contractor has been out there doing work, and they haven’t registered these projects, there’d be many, many, many violations.”

Under state law, Casa Del Maestro is considered a public works project—and required to pay prevailing wages— because the land is owned by the school district and the project was funded by a tax-exempt bond given exclusively to public entities. Prevailing wage policies are meant to ensure fair wages and conditions for workers in the construction trades.

Budget records show the foundation paid more than $222,000 last year on routine maintenance, repairs and services such as landscaping and painting. Yet none of those contacts are registered as prevailing wage projects on the state’s website—a requirement for this work.

Gillmor, whose company has gotten millions from contracts through the foundation to manage the teacher housing over the years, deferred questions to the foundation.

The foundation said it’s working with its legal counsel for a statement, but did not respond in time for publication.

David Bini, executive director of the Building and Construction Trades Council, said it’s ironic to see workers being potentially exploited on a property that’s meant to help other low-wage earners like teachers.

“As the mayor of Santa Clara, whether it’s a legal obligation or not, her company should be paying prevailing wages,” Bini, who has not reviewed the documents in this case, told San José Spotlight. “It’s ironic that housing that’s meant to solve an affordability problem for one type of worker might use exploitative pay practices for another type of worker. We cannot solve the housing affordability crisis by underpaying construction workers and driving them into poverty.”

Santa Clara Unified School District built the 70-unit teacher housing complex to help retain educators amid an ongoing housing crisis in the South Bay. The district used its tax-exempt status to issue certificates of participation—the non-taxable bond used by public entities—to build the housing, while the foundation operates as landlord of the property. The complex has proven successful in retaining some teachers, but the rent has been hiked up over the years, leaving educators with little savings after their 10-year eligibility ends.

Teachers are now paying between $2,090 and $2,430 a month across the property’s 1- and 2-bedroom units, according to the foundation’s documents. Gillmor failed to disclose income generated from property management fees from Casa Del Maestro as required until 2019, San José Spotlight previously reported.

The revelation about prevailing wages at Gillmor’s property management company comes as the mayor faces reelection. She has often positioned herself an ally of the labor movement—though it’s unclear if union support could be impacted by the allegations.

“The delegates consider all of the information that they have available to themselves when they’re evaluating candidates and making final endorsement decisions,” said Jean Cohen, executive officer of the South Bay Labor Council. “We have not interviewed for Santa Clara yet.”

Gillmor is being challenged by Councilmember Anthony Becker.

While Cohen said she didn’t know the particulars of the Casa Del Maestro situation, she stressed the importance of project labor and community workforce agreements that help protect workers. These agreements, along with state labor laws, ensure contractors and other low-wage workers receive livable wages and benefits.

“This goes beyond Santa Clara,” she told San José Spotlight. “This is a crisis everywhere in terms of the abuse of workers and wages being stolen, immigrants and poor people being taken advantage of by this underground economy.”