Santa Clara officials Tuesday night pushed forward a new land use and zoning plan that will help transform an industrial neighborhood of the city into a dense, mixed-use hotspot.

The Patrick Henry Drive Specific Plan, which will be studied for its environmental impacts through 2020, encompasses the city’s northernmost neighborhood on the border of Sunnyvale, tucked between Great America Parkway and Mission College Boulevard. City-hired planning consultant MIG Inc. has been studying the area and drawing up a land-use vision since being hired in August 2018.

Councilmembers unanimously voted to begin studying the environmental impacts of the proposed specific plan, which would include two options to make way for future projects by private developers.

“The planning framework envisions the comprehensive transformation of this industrial area into a high-density, mixed-use residential community supported by walkable streets and a range of neighborhood-serving amenities,” according to city documents. Those amenities include parks, trails, shops and potentially a new library.

Developers showed up to the council meeting Tuesday night to support the plan, but push for greater flexibility when it comes to density limits — both maximums and minimums — in the plan and urged officials to speed up the approval process so projects can get underway faster.

“We would be ready to bring a great project in 2020,” Jeff Smith, senior vice president of residential development at Sares Regis Group of Northern California, a prominent local developer working to redevelop a 6.5-acre property in the area.

Today, the Patrick Henry neighborhood is filled primarily with low-slung commercial buildings. But multiple developers own land in the area, which city officials say is ripe for housing growth that could help Santa Clara meet its lofty state-mandated home development goals, known as the Regional Housing Needs Allocation (RHNA).

Currently, the city is working toward a RHNA goal of more than 4,000 new units in the city at various affordability levels, but Bay Area cities are also bracing for the next round of RHNA goals set by the state, which are expected to be much higher.

Throughout the area, based on the current proposal, buildings would be allowed to rise from five stories to 25 stories in height, depending on the zoning, though Mayor Lisa Gillmor said she was apprehensive about envisioning buildings so tall rising in the area because they’d be “out of character” for the area.

About 11.4 acres — or about 22 percent of the land area — would be dedicated to publicly accessible park space, including a new “central park spine” running north and south through the neighborhood.

Meanwhile, new low-speed roads, shared by pedestrians, bicyclists and cars, are envisioned to “break up the existing superblocks to support intensified land use,” according to city planners. A new greenway could pop up along Patrick Henry Drive. 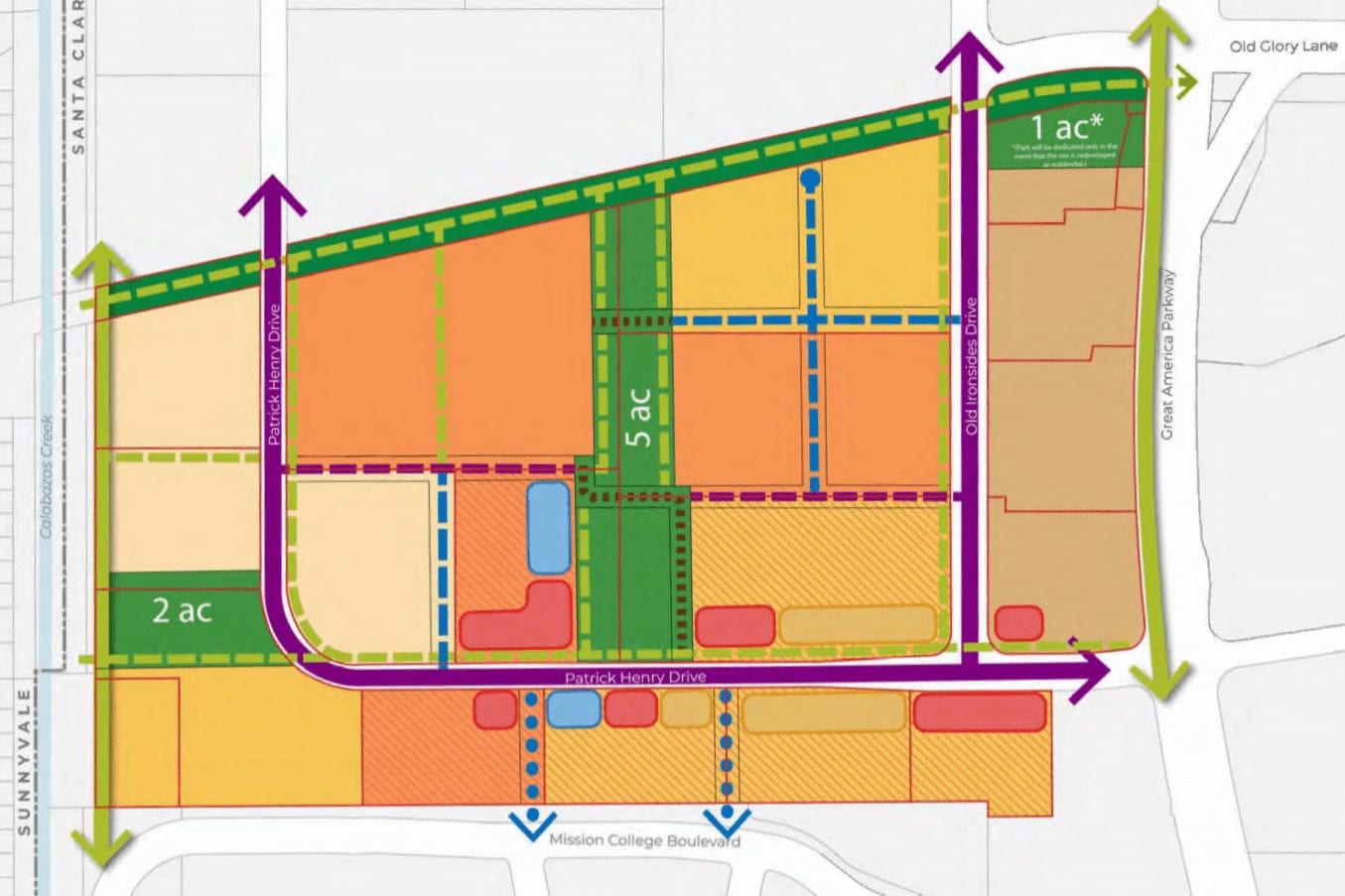 City officials this month will release a Notice of Preparation of the environmental analysis for the specific plan, which is essentially a call for community feedback regarding environmental concerns with the vision.

A draft environmental review document will be ready by late summer 2020 and residents will have a chance to comment on that as well. Councilmembers are expected to vote on the final specific plan by January 2021.