Santa Clara’s Police Chief Mike Sellers is set to retire more than a year before his term ends, leaving elected officials in the hot seat to decide who will be his successor, and already we know of at least one contender: Sgt. Pat Nikolai.

The South Bay city is the only municipality in the state that elects its police chief, and Sellers’ elected term was slated to end in December 2020. Instead, he’ll step down  on September 1 this year, leaving the top job at the police department vacant earlier than expected.

Sellers told San Jose Spotlight he opted to leave because he wanted to focus on his health, family, volunteering and travel.

“I’m sure people are not aware, but I work many 60-hour work weeks and have to be available 24/7,” he said. “That takes a toll on your personal life and your self.” 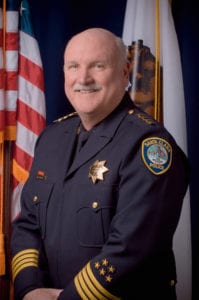 Michael Sellers announced this week he would retire on Sept, 1, before the end of his elected term. Photo Credit: Santa Clara Police Department.

Once Sellers leaves his post, Santa Clara’s City Council will have about 30 days to appoint a new police chief that will finish out the elected term. At least six of the seven City Council members need to agree on who to appoint, or the position will remain in flux with the Assistant Police Chief, Dan Winter, leading the charge.

If six out of seven City Council members can’t agree on who should take over as chief by the early October deadline, residents would vote via a general election on March 3, 2020, according to Santa Clara City Attorney Brian Doyle.

But there’s a catch: The person elected in March would only serve out the remainder of Sellers’ term.

The reality of that situation raised at least one eyebrow at the city’s July 9 council meeting, when Councilmember Debi Davis asked with a tone of surprise: “So these people have to run twice?”

Indeed, Doyle confirmed: “If you don’t appoint, then you have to have an election.”

As for who may be up for the job, one name that sits front of mind for many City Hall insiders is Sgt. Pat Nikolai, who ran against Sellers in 2016 to be the city’s police chief and narrowly lost that bid by barely more than 100 votes.

Nikolai confirmed Wednesday to San Jose Spotlight that he will be putting his name in the hat for the position when it comes open in September. He’s also ready to run in March, if he isn’t appointed by the City Council this year.

Nikolai had the backing of Santa Clara Mayor Lisa Gillmor in 2016, though Sellers was the incumbent police chief at the time. Gillmor’s support stemmed at least in part due to her concerns around security, policing costs and billing at Levi’s Stadium, the source of a longstanding feud with the San Francisco 49ers, who call the stadium home.

Sellers later pushed back on accusations of alleged mismanagement of police resources and billing for security services for Levi’s Stadium, culminating with an impassioned speech in which he accused the Santa Clara mayor of engaging in untruthful and divisive politics. Meanwhile, Nikolai had vowed to take a harder line with the NFL team on the issue.

Nikolai stands by that today, framing himself as an opportunity for change in the department, rather than sticking with the “status quo.”

If appointed or elected to police chief, Nikolai said in an interview Wednesday that he plans to take a hard look at all of the department’s processes and will ensure that no city funds are spent on security for events or games at Levi’s Stadium, per a city ordinance called Measure J.

“I’ve been there (in the police department) for over 25 years and the department is really basically run the same,” he said. “The stadium is new, obviously, but the basic department is the same department I started with. It seems like we need to grow and we need to innovate.”