While the Bay Area is known for its diversity in language and ethnicity, the state legislators representing districts from San Francisco to San Jose have at least one thing in common.

As elections for the California State Legislature approach next year, Close The Gap, a group that scouts and grooms women to run for office, is trying to decrease this disparity – especially in the South Bay.

“It’s unbelievable,” said Susannah Delano, executive director of Close the Gap California, in a recent interview. “If you look at it, it’s all male representatives.”

The male legislators represent seven Assembly districts and four Senate districts in the South Bay and the peninsula.

Close The Gap aims to find “progressive women” to replace many of these leaders, and they’re especially eyeing the seats of Beall — who terms out in 2020 — and Chu, who announced he’s leaving Sacramento to run for county supervisor. Close the Gap is also doing work in California’s Senate District 13 to replace Sen. Jerry Hill. 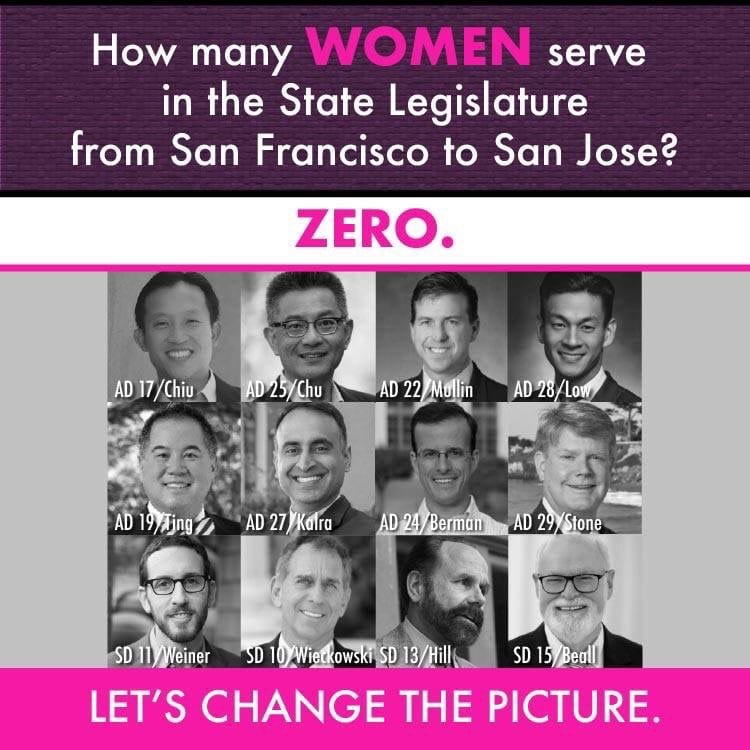 Why aren’t there more Silicon Valley women in Sacramento?

Delano said she isn’t sure what’s causing the imbalance in Silicon Valley, but said women candidates are generally less likely to decide themselves on whether to run.

“What we saw in 2016 was a lot of women terming out and women not replacing them for whatever reason,” Delano explained. “Women are less likely to self-select to run — they need to be encouraged.”

She added that women who have already run for office and lost are less likely to try again — unlike men, who are more likely to run multiple times until they succeed.

But women, once elected, have a track record of getting things done.

Congresswomen, for example, have a much higher success rate in securing funding for their district, according to research by Stanford Political Science Ph. D candidate Sarah Anzia and University of Chicago Harris School of Public Policy Associate Professor Christopher R. Berry.

Changes in the state budget spurred by women leaders in Silicon Valley could help improve healthcare and child care for women, said Garrick Percival, an associate professor of political science at San Jose State University. “Increasing funding, subsidies for child care, providing better access to healthcare for children, a lot of it is through the budget,” Percival said.

At the electoral level, the biggest barrier to having women in office is that not enough groups recruit them to run, experts say.

How does Close the Gap find women candidates?

Women candidates recruited by Close the Gap must be pro-choice, support equal rights to reproductive healthcare, commit to creating pathways out of poverty and quality public education.

Although many of the current elected male leaders share some progressive ideals outlined by Close The Gap, Delano said women policymakers create legislation from a different perspective than a man. “It’s this idea of a more comprehensive look at policy that women bring to the table that is partially based on a life experience,” Delano said.

Close The Gap focuses on scouting candidates from districts where progressive women are not rising in the list of candidates. They organize “seeding events” and search parties, in addition to working with other organizations to find women who have strong voices in their communities.

Once women candidates are chosen, Close The Gap prepares them with training on running a statewide campaign in Sacramento and in their home districts, hiring a consultant, raising money, and following legal requirements and other logistics of running for office.

The group is “out of the race” and does not financially support candidates once they declare. 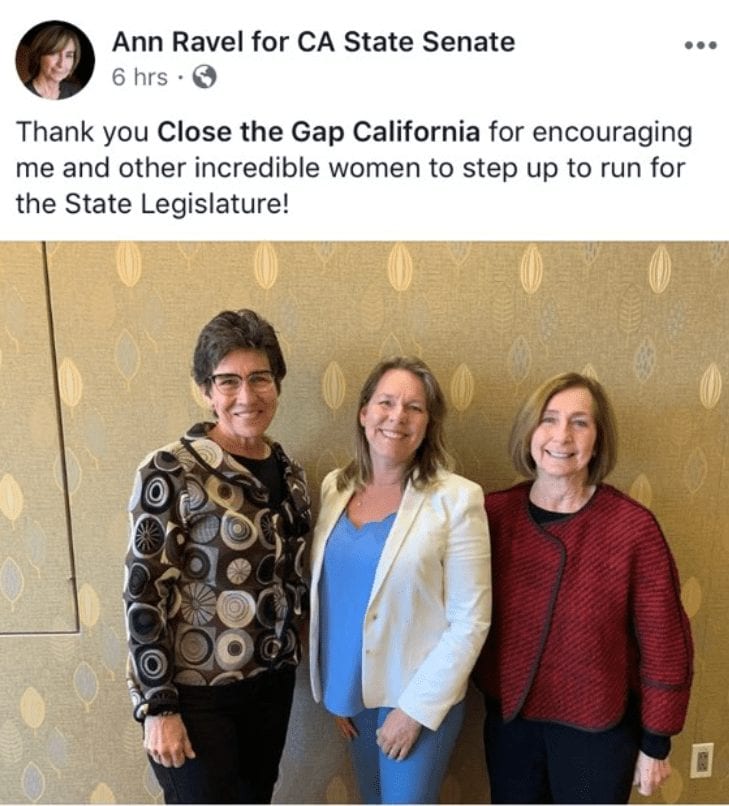 Delano said the organization is working with multiple candidates in the South Bay, whom she declined to name, but one of those candidates is former Federal Election Commission Chair Ann Ravel, who launched a campaign for the Senate District 15 seat to succeed Jim Beall, who terms out in 2020.

Ravel said Close the Gap has approached her for years about running for elected office, and she’s spoken at their events.

“I might have been an unusual recruit for them,” Ravel said. “First, it took so long for me to agree that it was already time for the campaign, but I certainly rely on them for advice.”

She said Close The Gap played a part in her decision to run, but she decided her own. The lack of women is a “detriment” to the Legislature, Ravel said, because women bring an important voice and they’re less likely to be influenced by special interest groups.

“What really ultimately motivated me was talking to some state senators about how important it is to be in the state Senate and how you can ultimately accomplish things for the state and people,” Ravel said.

Ravel’s goals include creating more affordable housing, access to affordable child care and reducing the cost of college education. “Women tend to be able to reach consensus more easily and are able to work with others to accomplish common goals even when they’re not entirely on the same page,” Ravel said.

There’s a little less than a year to see which candidates rise to the top, but Percival said women still face many barriers.

“There’s evidence that they win elections at the same rate as men once they run,” Percival said. “But they have to wade through a lot of forces and stereotypes that male candidates don’t.”

Despite this, many women candidates — particularly first-time candidates — can turn their lack of experience in elected office into a new voice with fresh ideas, said Percival and Delano.

Just look at New York Congresswoman Alexandria Ocasio-Cortez, who had no political experience but won her race with help from an organization similar to Close the Gap.

“I think AOC represents a really exciting trend in politics,” Delano said. “We’re kind of at a moment where outsider status from the political institution can galvanize. I think more than ever that’s what defines a candidate.”