Silicon Valley Organization President and CEO Matt Mahood has been placed on an administrative leave, one day after the organization came under fire for a racist image posted on its website.

“A qualified third-party investigator has been engaged to conduct a top down investigation to determine how and why such an image was posted,” Madison Nguyen, The SVO’s executive vice president, said in a statement. “Their investigation will explore all levels of the organization starting with leadership and will include inherent cultural issues in the organization that might have contributed to this disgraceful post, along with recommendations for necessary changes.”

The image from The SVO PAC was a political attack on progressive candidate Jake Tonkel, who is challenging San Jose Councilmember Dev Davis.

On its website, the business organization posted — then later deleted — a black-and-white image of Black people in what appears to be a riot in South Africa. A caption reads, “Do you really want to sign on to this?” alleging Tonkel supports defunding the police, which they claim could lead to riots.

“An image was recently posted on The SVO website that was blatantly racist, completely inappropriate and unacceptable,” Nguyen said in a statement. “We are horrified by this image as it does not represent the values of the organization, the leadership, the Board of Directors or our members. For that, we apologize. There is no excuse. The Board of Directors is moving quickly and effectively to understand how this could have occurred, and to ensure it never happens again. We understand that swift, effective action is required so that the other positive work and community support of the SVO is not impacted.”

The news of Mahood’s administrative leave comes as three prominent board members resigned and more fallout is on the horizon.

Joshua Howard and Anil Babbar, two top leaders from the California Apartment Association — which has often been lockstep with The SVO — are cutting ties with the business lobby over the images.

“We are disappointed in the inappropriate and blatantly racist imagery that was posted on the SVO website,” they state in a letter. “This action and its message were never discussed or vetted by SVO PAC members.” 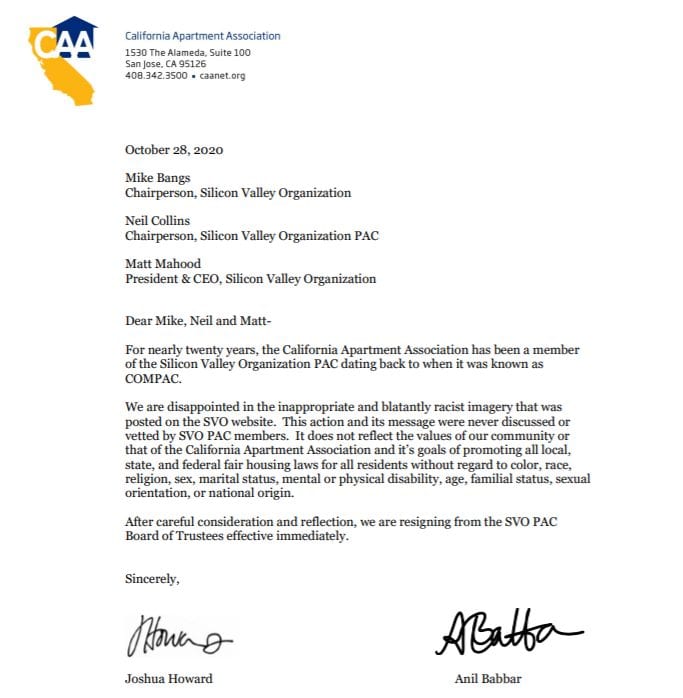 Serpa said Republic Services left The SVO because it’s committed to a culture where everyone feels safe, respected and valued.

“We have zero tolerance for racism and are outraged by the inappropriate and offensive image posted by the Silicon Valley Organization PAC,” the company said in a statement. “We immediately resigned from the SVO PAC and are evaluating our future with the organization as a whole. San Jose expects and deserves better representation for its business community.”

This isn’t the first time the business group’s PAC, which endorses and fundraises for business-friendly candidates, has faced backlash over questionable campaign ads.

In February, the group darkened the face of a Latina lawmaker — San Jose Councilmember Sylvia Arenas — in a campaign ad that was called racist.

The group faced similar allegations in 2016 when it darkened an image of Councilmember Sergio Jimenez, and doctored an image of council candidate Kalen Gallagher in 2018 to look like he’s flipping off the camera. That debacle led to trustees from the PAC resigning their position, similar to Howard, Babbar and Serpa.

The group’s controversial campaign tactics have also resulted in high-level executives leaving the organization. Santa Clara County Supervisor Susan Ellenberg, who served as a senior director, quit in 2018 after SVO backed former San Jose Councilman Pierluigi Oliverio in his run for county supervisor, despite credible reports of sexual harassment against him.

“It is disgusting and unacceptable,” Ellenberg posted on Facebook Oct. 27, referring to the image against Tonkel. “It also unfortunately reflects a pattern of particularly offensive smears against candidates the SVO opposes. They do no favors for the candidates they support by engaging in racist (and at other times misogynistic) messaging. This type of campaigning is part of the reason I left the organization.”

The resignation of Howard, Babbar and Serpa come as labor and civil rights leaders planned a news conference to denounce The SVO.

Davis, the candidate backed by the group, quickly condemned the racist images against her opponent and said she’s “ashamed” of the support she’s received from the group. Davis told San José Spotlight on Wednesday she is donating $1,200 in campaign contributions she received from The SVO to the NAACP.

Regardless of what you think about police funding, it’s unacceptable to play on racial divisions and perpetuate harmful stereotypes. We need to elevate our political debate. @PACSV_ needs to not only investigate, but commit to real changes. https://t.co/oDFGUpyLzJ

Tonkel told San José Spotlight The SVO’s leadership should step down because the organization is becoming “an embarrassment to our community.”

He called on the organization to donate an equivalent amount of money used on attack ads to organizations working for racial and social justice.

“I am grateful to Councilmember Davis for her statement condemning the SVO’s tactics and her separation from them as an endorsing organization,” Tonkel said. “I encourage other elected officials and candidates to follow these actions and distance themselves from the SVO, who carries a toxic history of political activity against low-income people and people of color.”