Any San Jose student could receive a free school meal during the COVID-19 pandemic. Now California is making sure that doesn’t stop with the start of this school year.

California is the first state in the country to pass the Universal Meals Program, which requires schools to provide free breakfast and lunch to students regardless of family income. California lawmakers will allocate $650 million each year to the program. The state has already provided $150 million in funding for kitchen infrastructure improvements and staff nutrition training.

Even in Santa Clara County, one of the wealthiest counties in the nation, food insecurity is real and impacts the area’s most vulnerable populations including homeless residents and students. One in three children in the county are at risk of facing food insecurity, according to local food bank Second Harvest Silicon Valley. Compounding the problem is inflation, which has increased food prices and hit family budgets. Schools have stepped in throughout the summer to offer meal programs and keep students and families fed.

“We shouldn’t be dividing kids up into ‘free,’ ‘reduced’ and ‘paid,’” Weatherby told San José Spotlight. “There’s also the fact that a lot of families don’t apply because of stigma. They don’t want to be seen as needing help.” 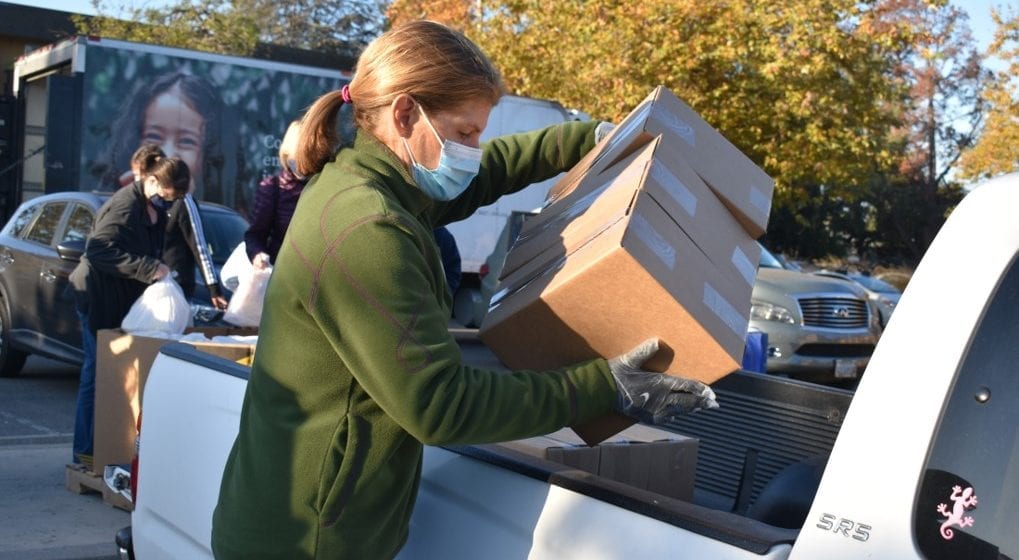 COVID-19 has led to widespread food insecurity in Silicon Valley. Thousands of volunteers are helping fight it.

Prior to the COVID-19 pandemic, school meals were mainly the responsibility of the federal government through the U.S. Department of Agriculture National School Lunch Program, which provided free or reduced-price meals based on a family’s income. That shifted to the states during COVID-19, said Marjorie Freedman, a San Jose State University professor emeritus in nutrition.

“No child can pay attention if they’re hungry,” Freedman told San José Spotlight. “Look at the cost of food now with inflation. It’s absolutely crazy how much basic necessities cost.”

The shift to universal meals during the pandemic enabled more food to be served, said Glenn Vander Zee, superintendent of East Side Union High School District. During the 2018-19 school year, the school district served an average of 3,700 breakfasts and 5,640 lunches a day. But during the 2021-22 school year that number jumped to 4,725 breakfasts and 7,640 lunches, an increase of 28% and 35%, respectively.

“The community has demonstrated both the need and appreciation for the availability of these meals,” Vander Zee told San José Spotlight.

While schools have a responsibility and unique ability to work directly with students and families, free meals are only the first step, said Omar Davila Jr., a child studies assistant professor at Santa Clara University. Education policy needs to factor in all facets of a student’s experience to provide the most effective resources, he told San José Spotlight.

“A UCLA study found that two of every three undocumented children in California were experiencing food insecurity,” he said. “We know that even when we compare students who have the same academic skill sets, who are the same on paper, low income students are still less likely to graduate from college.”

At Alum Rock Union School District, a free meal program has been in place for more than a decade in response to the district’s high level of food insecurity within the community, said Superintendent Hilaria Bauer.

The school district provides breakfast, lunch and “light supper” to over 8,000 students and served more than 6 million meals to students and families during the COVID-19 pandemic, she said.

“We have been doing universal eating (programs) in Alum Rock since 2004,” Bauer told San José Spotlight. “The state (is) catching up to the reality. It’s very difficult to learn when you’re hungry.”