San Jose’s Latina leaders denounced a string of “No on Prop. 15” Spanish-language social media ads that they say use scare tactics and spread misinformation.

Prop. 15 would require commercial and industrial properties worth more than $3 million to pay property tax based on their current market value rather than on the purchase price.

An open letter signed by 12 Latina leaders that was posted on the publishing platform Medium calls the ads lies and says Prop. 15 amounts to “structural racism.”

“I am personally appalled at the disinformation directed at Latino voters against Proposition 15,” said Blanca Alvarado, the first Latina elected to San Jose City Council in 1980. “Rich and powerful special interests are unwilling to pay their fair share of taxes for better schools and services to our communities of color.”

The No on Prop 15 – Stop Higher Property Taxes political organization started releasing Spanish-language ads through Facebook and Instagram Sept. 25. It has released more than 27 video and text ads and spent close to $60,000 running concurrent messaging and endorsement campaigns online aimed at Spanish-speaking voters, according to Facebook.

One of the ads included a statement from the president of the California Hispanic Chamber of Commerce, Julian Canete, that was viewed more than a million times, according to Facebook.

Most of the ads claim Prop. 15 will cause property taxes to hike so significantly that people will not be able to afford rent or house payments. But the proposition does not apply to residential property.

No on Prop 15 – Stop Higher Property Taxes did not respond to San José Spotlight’s request for comment.

Vero Marquez, communications manager for Silicon Valley Rising, a coalition of community groups, said Latina leaders decided to take action when the ads popped up on their Facebook feeds.

“I was scrolling through my Facebook and I saw me being targeted as a Latina with Spanish ads from the Hispanic Chamber of Commerce, ex-Assembly members, etc,” said Maria Noel Fernandez, deputy executive director of Working Partnerships USA.

Fernandez said she has been working for years to pass Prop. 15, and seeing misinformation about the proposed legislation in Spanish made the matter more personal for her.

“It was just an igniter for me to have a conversation with local Latina leaders, push back and tell the truth about what Prop. 15 is really about,” she said.

Fernandez said she was especially incensed that the ads claim Prop. 15 will raise property taxes.

“That’s exactly the piece they’re trying to scare the community on, saying this is going to affect homeowners and renters” she said. “Then you look at the ballot measure language and that’s absolutely false. It’s awful that they’re trying to prey on Latinos.”

“Our communities have shouldered both the social and economic burdens caused by this property tax loophole for too long,” she said. “A better life for all our children is possible.”

Since 2014, three unsuccessful legislative attempts have been proposed to increase commercial property taxes in California. 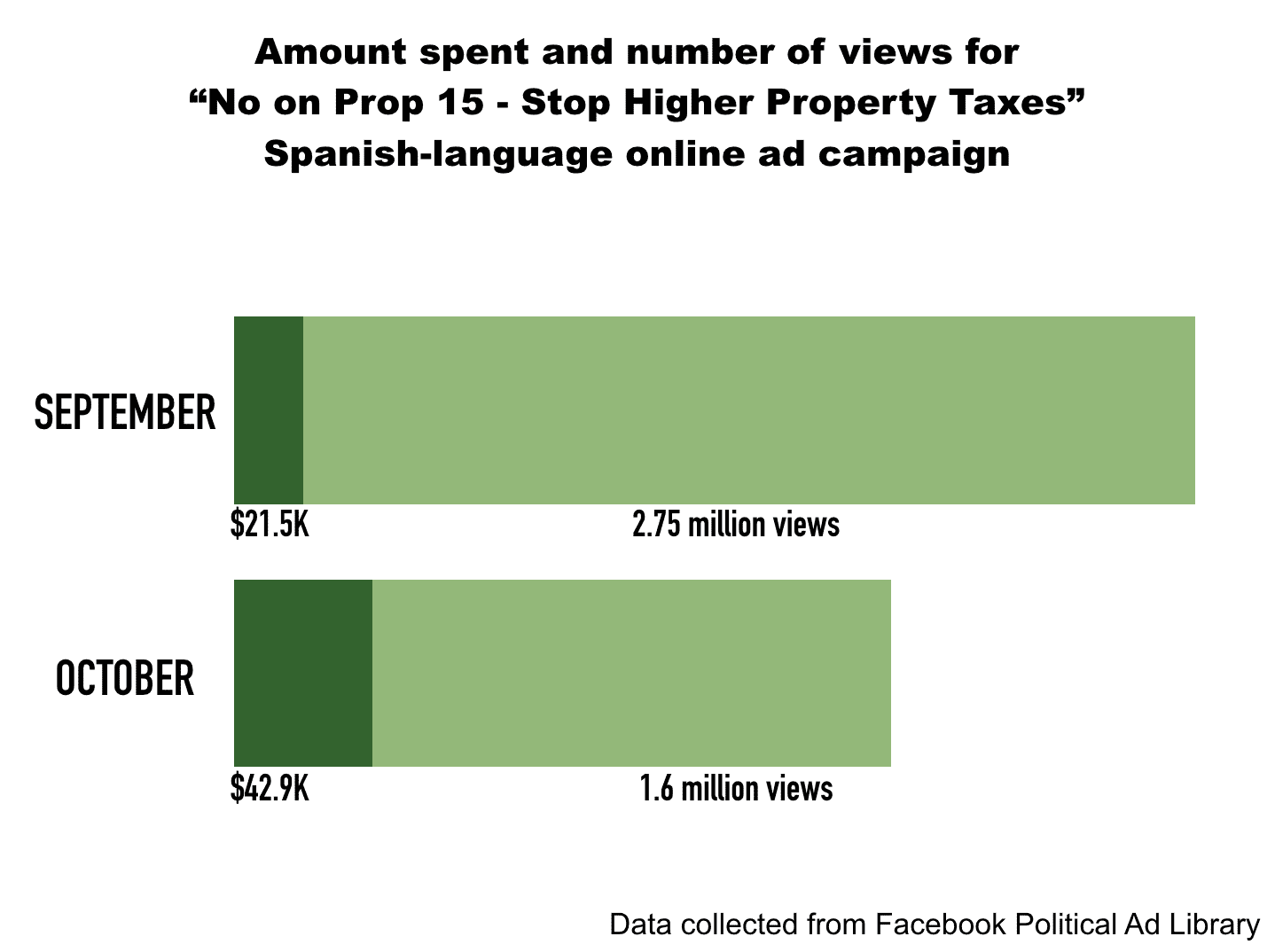