Above a noisy jazz cafe in a small, packed room, a crowd sat attentively Thursday evening as a panel of experts –an advocate, a policymaker, and an industry professional — spoke on raising building height limits in downtown San Jose.

The first set of questions, asked by moderator Bob Staedler of Silicon Valley Synergy, focused on why raising building heights — a measure that was once proposed in 2007 — felt relevant now.

Peralez, who cited development around Diridon Station and the new Google campus as a factor that spurred public interest, reminded the audience that this issue is not new and that it has been a focal point for him during his term. 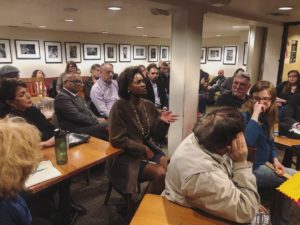 Several policymakers such as Peralez and Mayor Sam Liccardo agree that raising building height limits would help increase density and stimulate the economy in downtown. If approved at the City Council meeting in March, the measure would allow the development of taller buildings exceeding up to 35 feet from the current limits in downtown and up to 137 feet in the Diridon Station area.

Knies contributed to that sentiment by stating how the vast improvements and advancements to airline technology are more reason to support the measure and that commissioners are falsely claiming that planes will fly into buildings.

“That is B.S.,” Knies explained. “There would not be a proposition if there was an issue with safety. It is an economic issue.”

Cathy Hendrix, the only voice of dissent between the two men, disagreed.

The airport commissioner, although representing only her own views, cited several safety concerns about weight penalties, fuel efficiency and an increase in air traffic. “It is an economic issue, yes, but it is a safety one as well,” she said. “It is not because you will be running into a building that it isn’t a safety issue.”

Hendrix added that she thinks that the increase in noise complaints and weight limitations will severely affect the quality of service out of the airport. “There is an issue if people are not able to get enough flights. If I take a flight, I don’t want to get removed,” she said.

She added that allowing the measure to pass could result in discontinuation of service to some international hubs.

Staedler moved onto addressing the elephant in the room: How much of this policy change is prompted by Google? The tech titan is building a massive campus in downtown San Jose that’s expected to bring 20,000 new jobs to the city.

Hendrix mentioned her concern about policymakers’ ties to Google, and how the lack of transparency should make people worry. “Google has everything to do with the rush on making a decision,” she said. “We can wait on this. Why are we rushing? Let’s not cripple the airport and sacrifice it for corporate interests and people who are already making a lot of money.”

For years, pro-business advocates and big tech companies such as Google have been at the forefront of supporting raising building height limits. To many, increasing development could mean a large hub for transportation, would include new mixed-use housing projects and increase the vibrancy of San Jose’s downtown. In addition, an increase in new housing developments could help address the region’s rising housing costs and ongoing housing crisis, some advocates say.

“The problem is public perception,” Peralez said. “The reality is, Google is not driving the decisions. I’ll give back all the zero dollars I got from Google. We can achieve this growth that we want with these added heights. Here we are today with a recommendation that I think both sides can thrive from.”

“How do we drive as a city?” added Knies. “Nobody wants just a regional airport. We talked to the airlines. They’re cool with it, why? Because this is where their business is going to grow.”

Pat Dando sculpture in the works to honor lawmaker's memory