San Jose State leaders on Tuesday called on tech companies and other institutions to address white supremacy and inequality, which are seeped into nearly every aspect of Silicon Valley life, according to new research unveiled this week.

“What is truly stunning is that in every institution examined, whites have the advantage over people of color,” Scott Myers-Lipton, a San Jose State professor who led the research, said outside the Martin Luther King Library Tuesday. “The overwhelming number of stats make it difficult for most to argue that our institutions are not fundamentally biased in favor of whites.”

According to the report, there are 76,000 millionaires and billionaires who live in Silicon Valley. The net worth of the top 10 richest Silicon Valley moguls, all of which are white men, is $248 billion. Four of the valley’s most iconic tech firms, Alphabet (which owns Google), Facebook, Cisco and Apple have a combined $307 billion in cash reserves. 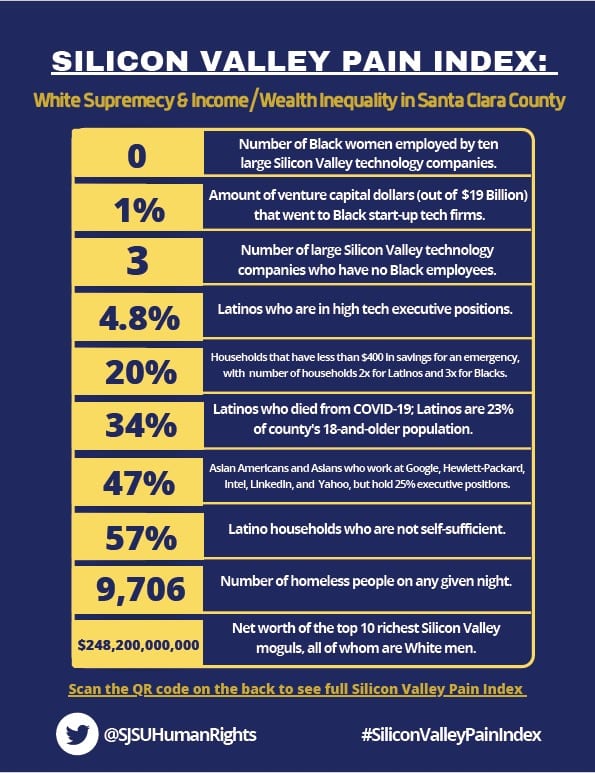 Rev. Jeff Moore of the NAACP said Silicon Valley companies need to “stop pimping the people,” and compared the history of companies like IBM and Hewlett-Packard hiring people of color to more selfish corporate leadership now.

“Now we have a bunch of billionaires sitting here that seem to have no understanding of the humanity they are damaging,” he said.

The region has long been known as the “tale of two Silicon Valleys.” Against the backdrop of massive wealth that put Silicon Valley on the map, there exists extreme poverty lingering in the shadows. And that poverty, the new research found, consistently hurts communities of color in nearly every institution and sector of the economy.

But it starts with the education system.

The systemic racism then trickles into the criminal justice system.

And when it comes to leadership positions at Silicon Valley’s powerful tech firms, people of color are once again underrepresented — or, in some cases, non-existent.

The report found zero Black women employed by ten large Silicon Valley tech companies. Black employees comprise 3% of the workforce in the top 75 tech companies. And only 4.8% of Latinos are in corporate high tech executive positions.

Briena Brown, president of SJSU’s Associated Students Student Homeless Alliance, said she experienced racism while interning at a well-known tech company, which she did not name, when two colleagues touched her hair without consent and questioned her hair style. Brown said she was the only Black woman in the organization.

“I consider myself one of the lucky ones,” she said. “I wasn’t sent home, I wasn’t openly discriminated against and I wasn’t fired, but I was alone.”

Brown said the statistics in the Pain Index did not surprise her and validated her experiences.

“What matters to me is how much pain is being caused by the economy in our community,” he said.

Myers-Lipton said the statistics show that white supremacy is operating in most of the institutions and systems in Silicon Valley, whether it be in the criminal justice system, the economy, education, employment, or housing.

“What these stats show is that the entire playing field, that is, the whole system, is tilted to advantage whites over Blacks, Asians, Latinos and Native Americans,” he said. “When zero Black women are employed by 10 large Silicon Valley technology companies, while at the same time you have the top 10 richest Silicon Valley moguls — all of which are white men – with a net worth of $248 billion, you have a system based on white supremacy and inequality.”