One East Bay housing advocate says that when dealing with gentrification and displacement, it’s time to “push back.”

Housing, gentrification, tech workers, corporations, taxes and displacement — all topics discussed Sunday afternoon during a live broadcast of Connect the Bay, a quarterly live TV program produced by Northern California Public Media, in partnership with San José Spotlight and CreaTV San Jose. The regional discussion — which included participants from the region’s North and South Bay and four expert panelists — dug broadly into how the Bay Area can stop displacement and help its longtime residents stay in the cities they helped build.

“We do need to redefine our economy and be clear — housing should not just be this commodity that’s about making profit, housing is a human right,” said Gloria Bruce, executive director of Oakland-based housing advocacy group, East Bay Housing Organizations and a panelist at Sunday’s live stream and forum. “We need to both push back against, ‘Let’s just build whatever in low-income communities in the big cities,’ and at the same time be like, ‘But we do need to build in places that have said no to building for 50, 60 years,” she said.

According to the panel, that means more housing, more contributions from local giant companies and more legislation to curb rising rents and open doors for “local preference” on affordable housing — or preference to renters who have lived locally longer than their new, incoming neighbors.

While gentrification and displacement run rampant throughout the region, there are many commonalities, whether it’s in Santa Rosa or San Jose. Nearly everyone knows it’s happening in their neighborhoods.

Bruce’s organization advocated for San Francisco state Sen. Scott Wiener’s Senate Bill 50 — a bill which was recently put on hold until next year. With SB 50 aiming to lower barriers for building affordable housing near transit-rich areas throughout the state, the State’s Senate Appropriations Committee halted the bill’s progress until January 2020.

“It’s critical that we don’t just build housing,” Bruce said. “We do need to build housing, but we have to make sure that we’re protecting those sensitive communities, and communities of color, at the same time.”

She expressed the importance of understanding that it’s not just SB 50 moving through California politics, pointing to Assembly Bill 1482 — a piece of rent-cap legislation which will soon make it to a Senate hearing — as another important bill to pay attention to.

Audience members asked questions during the forum Sunday, including how large corporations can co-exist with the community and whether they should be taxed to fund affordable housing in the Bay Area. 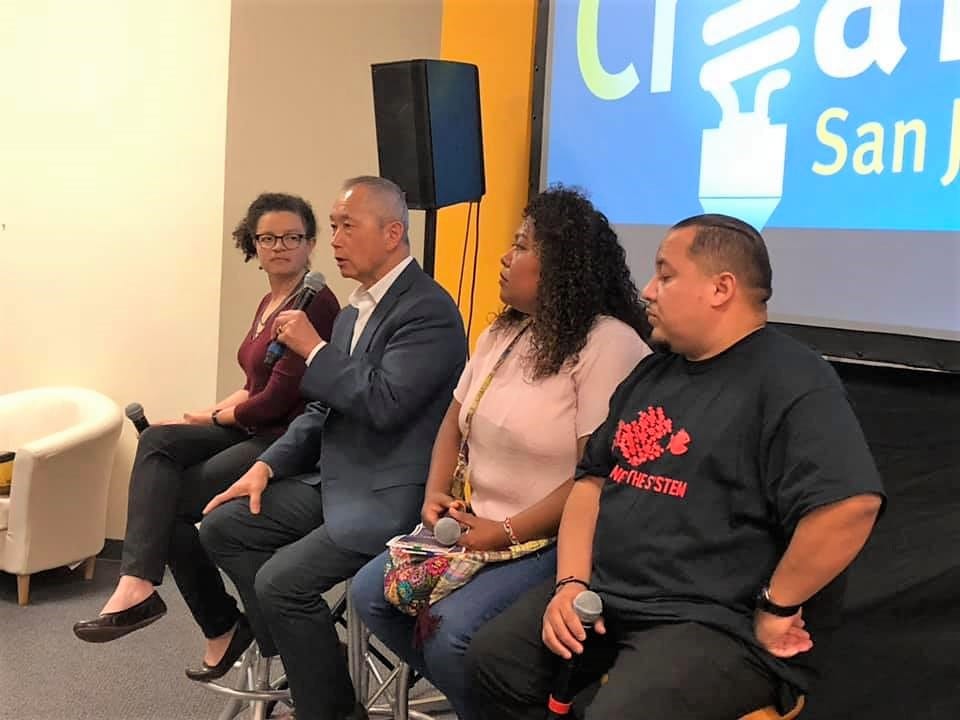 Panelists overwhelmingly said yes, and some advocated for charging major corporations a commercial linkage fee to develop in local cities. But that doesn’t fully address solutions to the crisis, said Hom, who offered some insight into what can be done moving forward.

“I think quite honestly, I’m not being a pessimist, but no matter what the cities, state and federal governments do, especially in the Bay Area, gentrification will continue,” Hom said, adding that businesses need to create more job opportunities in areas outside of transit-rich spots, “such that you don’t have the long, horrendous commutes that are happening right now, especially for low income [people].”

He said in order to curb displacement, people need to be able to work in the communities they live in.

Vazquez, representing SOMOS Mayfair, said that stopping gentrification and displacement includes standing up for businesses who can’t afford high operating costs, including minority-owned businesses that are being priced out — such as those along the Alum Rock corridor — while losing business from their nearby customers.

Another attendee asked how to limit developers and landlords looking to make “obscene profits” on the area’s housing market.

“I know a lot of people in my community that have been kicked out of their apartments without any certification because [their landlords] wanted to rent to someone else,” said Ortiz, who also represented SOMOS Mayfair. “They’ve been living there for 15, 20 years and they just got kicked out, and they rent for $1,000 more. So we need more rent control, and not just only in apartments, but also in duplexes, homes and everything.”

Ultimately, the panel advocated for more organizing against entities looking to make more money off of the region’s low-income renters and called for greater awareness of what might be driving inflation, displacement and gentrification in the Bay Area’s expansive communities.

“I think what inspires me the most is to see that people are interested to see more and learn,” she said, adding that the diversity of the panel audience drew her attention.

“I see people that are perhaps from European descent and people of color,” Silva said. “It is a sign of the changes that we need to see moving forward.”