After lending his support to Mayor Sam Liccardo in his 2014 run for mayor against Santa Clara County Supervisor Dave Cortese, former Mayor Tom McEnery is all in for Cortese — an unusual decision given the two politicians’ starkly opposite views.

Cortese, who this year terms out from the Board of Supervisors after 12 years and is running for state Senate to succeed Jim Beall, announced Monday afternoon that he’s nabbed the former mayor’s powerful endorsement. 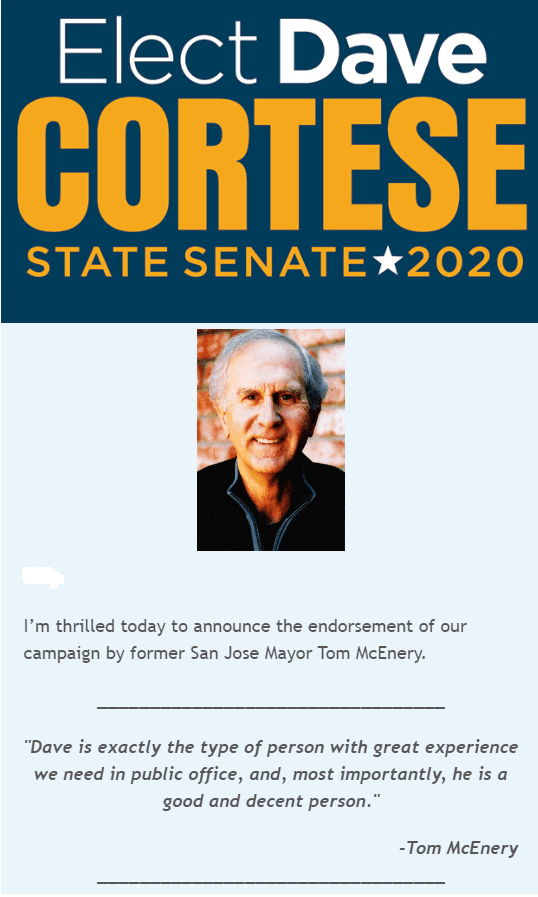 “Dave is exactly the type of person with great experience we need in public office, and, most importantly, he is a good and decent person,” McEnery said in a statement included in the announcement.

Cortese is among the most progressive, labor-backed candidates in the race — so the endorsement from McEnery, who tends to align himself with business-friendly interests, might surprise some political insiders. But Cortese told San José Spotlight that the former mayor has supported his other campaigns — besides his run for mayor — for years.

And despite being in opposite political camps, their families have also been friends for decades.

“Actually, Tom has supported me in most of my past elections,” said Cortese, adding that McEnery supported him for the East Side Union High School District, San Jose City Council and Santa Clara County supervisor. “Aside from a couple of times when we were not on the same page, we’ve had a very good relationship over the years that dates back in our families several generations.”

Other than Cortese, McEnery has also endorsed District 10 council candidate Matt Mahan in the 2020 election cycle.