Valley Water leaders are moving forward with developing a new dam at Pacheco Pass in south Santa Clara County, despite recently learning that the price tag had doubled since 2019.

“It seems to me that the directors of the water district need to take every extreme measure we can find to continue this project, moving it forward and working with environmental groups as we always do,” said Santa Clara Valley Water District Director John Varela. “(We need to be) finding the solution, finding the resources to bring this to fruition and make it happen.”

The directors voted unanimously Jan. 12 to keep developing and studying plans for the project.

Valley Water in 2017 first unveiled a plan to build a dam to expand Pacheco Reservoir to increase local water amid an increasing drought. The proposed site is about a 30-minute drive east of Gilroy, between Henry W. Coe State Park and Pacheco State Park. The project would increase the reservoir’s capacity from 5,500 acre feet to 140,000 acre feet of water.

Now, district officials are looking at a cost of $2.5 billion, after studies showed deeper excavations would be necessary to build the dam’s foundation at the proposed site. Rock quality would also require a reconstructed spillway to enhance stability, increasing the price, as well as a longer construction timeline.

Project managers now think it will take eight years to complete the dam. The previous estimate was only five years. 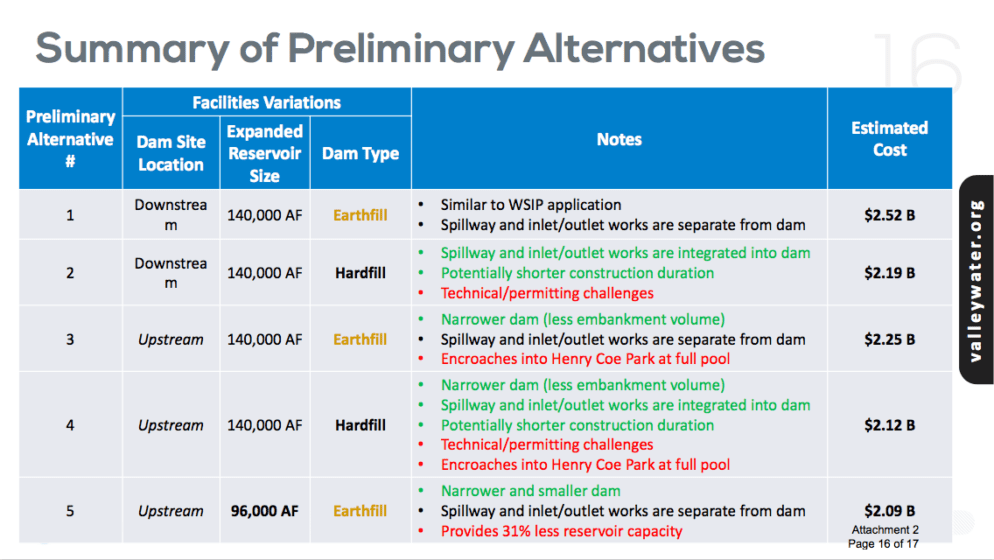 “If we don’t pull the plug on this today, I guess your idea is to investigate these five alternatives and then either make a recommendation or bring it back to us to make a decision,” said District 4 Director Linda LeZotte. “I think at that point it would be very important to know what permitting hurdles are we looking at after you’ve had some better time to hone in on them.”

Project managers said no subsurface studies were completed when the project first began, meaning no drilling was done to determine whether the site would support the dam or not. The area surrounding the proposed dam site is mostly private property, managers said, so it was difficult to complete that work.

Representatives from the Loma Prieta chapter of the Sierra Club expressed growing concern in a letter to directors, saying the project is no longer viable.

“The extraordinary cost increases signal further cost escalation and unacceptable water charge increases in the future, and lower cost alternatives to provide the same benefits are available,” wrote Katja Irvin and Gladwyn d’Souza in the Sierra Club letter. “The extreme environmental impacts that would result from this project are certainly no longer justifiable, if they ever were.”

Sierra Club warned that approval of the project could mean increased water rates in parts of the county by about 145% over the next 10 years.

Valley Water spokesman Matt Keller confirmed the 145% increase is “possible,” but said it would help fund all of the district’s projects. The Pacheco Pass dam would account for 17% of that increase.

Though they approved moving forward, some directors expressed various reservations about the project.

“As of now I’m keeping an open mind for this project,” said District 5 Director Nai Hsueh. She said she thought the price tag would keep increasing due to inflation and other unexpected costs.

But after project managers told directors they thought agency partners could foot 20% of the bill, Hsueh countered.

“I’m not sure these assumptions are realistic,” she said.

Valley Water officials said they would work on more community outreach beginning in February and expect to have a draft environmental impact report by the end of 2021.