Most days, Tiêủ-Vân Phan’s car carries the tantalizing scents of Vietnamese shaking beef or Hainanese chicken rice, lingering from her meal deliveries to hospitals across the county.

Vietnamese-owned restaurants in Silicon Valley have mobilized together to donate thousands of meals to frontline workers over the last two months during the region’s shelter-in-place orders.

Phan, a San Jose resident who works in sales, initially donated personal protective equipment, such as masks and hand sanitizer, to frontline workers with a group of friends. However, after hearing stories about hospital workers treating COVID-19 patients in ICU units every day, she decided to switch gears.

“After work, they’re very tired. Some of them have to cook to bring lunch to work the next day because the cafeterias are closed,” Phan told San José Spotlight. “I had the idea that instead of raising more medical supplies, we should do meals.”

And since she’s delivered items to hospitals before, Phan said, Vietnamese business owners — from restaurants to tea shops — started reaching out to ask her to deliver their donations. According to Phan, the first was Phở Hà Nội restaurant, which has since donated 4,000 meals to tired nurses and medical personnel in the span of seven weeks.

Phở Hà Nội’s owner, Huyền ‘Helen’ Nguyễn, said cooking the meals at their Cupertino restaurant has been a team effort that’s involved everyone from her employees to her daughters. For her, the gratitude toward medical professionals is personal.

“In the past, my youngest daughter had eye cancer when she was only ten months old,” Nguyễn said in Vietnamese. “Doctors in the hospitals cured her illness, and the way they acted toward us made me very emotional… they sat down and reassured us and told me they would try their best.”

“I thought that this was a good time to help them,” Nguyễn continued. “This was the time for me to show my appreciation for the doctors and nurses of America who saved my daughter.”

Quỳnh Lê, the owner of Nam Giao restaurant in San Jose, was forced to shutter her restaurant after its grand opening in December because of the pandemic. But a week later, Lê said her employees were asking for work to support their families.

Lê has turned to donating foods to hospitals in order to keep her staff employed and vendors in business.

Beyond contributing to hospitals, Nam Giao has also donated meals to homeless residents through Sleeping Bags for the Homeless Silicon Valley, an organization that provides supplies to the unhoused.

“That’s my responsibility, to do something, somehow, for this community,” Lê told San José Spotlight. “This is my community.” 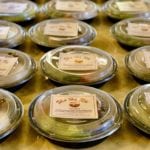 Phở Hà Nội was the first restaurant to offer Phan meals to deliver, reaching up to 4,000 meals throughout the past two months. Photo courtesy of Tiêủ-Vân Phan. 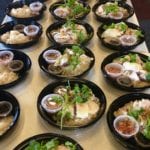 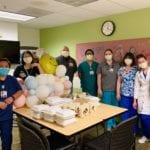 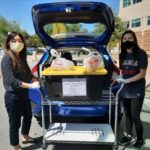 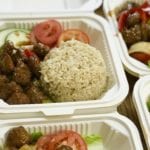 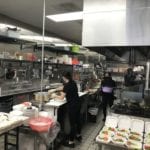 Green Lotus restaurant's staff is pictured in this file photo.

The stresses of the job, Võ said, are alleviated when restaurants — not just Vietnamese-owned — but those from all over the Bay Area, donate meals.

“When we get a meal, we feel that the community cares for us,” Võ said in Vietnamese. “It makes us happy.”

Recognizing that Phan needed help to do more deliveries, Võ recommended that her students at Foothill College volunteer –while obeying social distancing protocols and wearing masks.

“When shelter-in-place was enforced in mid-March and our Foothill College campus had closed, I was looking for ways to continue to help and give back to the community, especially during these hard times,” said Leslie Dinh, a Foothill College student who’s made dozens of deliveries so far. “I think these projects are important because despite the many adversities that come our way, especially for those like my mom who came here with limited English and resources, we continue to stand united.”

For now, Phan plans to continue her deliveries as long as restaurants are willing to donate.