San Jose elected officials can hold stocks, but at what point does it interfere with their work?

Stock ownership became an issue for the San Jose City Council in February when two members abruptly recused themselves from a vote on hazard pay for grocery workers due to a potential conflict of interest.

“That was a learning lesson for me,” said Vice Mayor Chappie Jones, who left before the vote due to holdings in Amazon, parent company of grocery chain Whole Foods which is subject to the new rules.

Councilmember Pam Foley also left before the vote. Though she personally doesn’t hold Amazon stock, she and her husband own a mortgage company where some Amazon stock plays a role in the business’s employee benefits plan.

A representative from Foley’s office declined to comment for this article.

The incident raised concerns about how councilmembers can keep track of what financial interests they have, and how that might affect their votes. City Attorney Nora Frimann said in February private conversations would normally take place if a councilmember suspected a conflict, but no one thought to ask whether owning Amazon stock would be a problem.

Frimann said she had no idea any conflicts existed.

“We’ll have to think about ways to make sure we’re triggering people’s thoughts about stock ownership if we have something coming forward involving a corporation,” Frimann said.

Jones believes the city is taking steps to ensure something like the abrupt recusal doesn’t happen again.

“The city attorney is being very proactive … to inform us of companies that could potentially be impacted,” Jones said. “They’re bringing it to our attention ahead of time so we’re not surprised or caught off guard.”

On a more personal level, Jones said he is in the process of liquidating much of his individual stocks and moving into mutual funds to make it easier to keep track of his financial interests. He’s also looking to invest in stocks that have the least possibility of being involved in future city votes.

All California elected officials and candidates are required to disclose financial interests to the California Fair Political Practices Commission, the state’s campaign finance watchdog. The Form 700 requires disclosing certain financial records, such as sources of income, real estate investments, businesses they own and stocks they hold.

According to state law, elected officials are required to recuse themselves from a vote if they have a financial interest in the matter.

Six San Jose councilmembers own stock in at least one company, according to the most recent filings for the 2020 calendar year, which each councilmember filed by Apr. 1.

The mayor owned stock in 11 different companies in 2020, with a majority in pharmaceutical and tech.

The vice mayor owned stock in 40 different companies in 2020, by far the most among councilmembers. Jones’ stock holdings include a diverse range of industries, from social media and video games to real estate and big retailers, including Amazon. He has since sold his stock in Amazon. 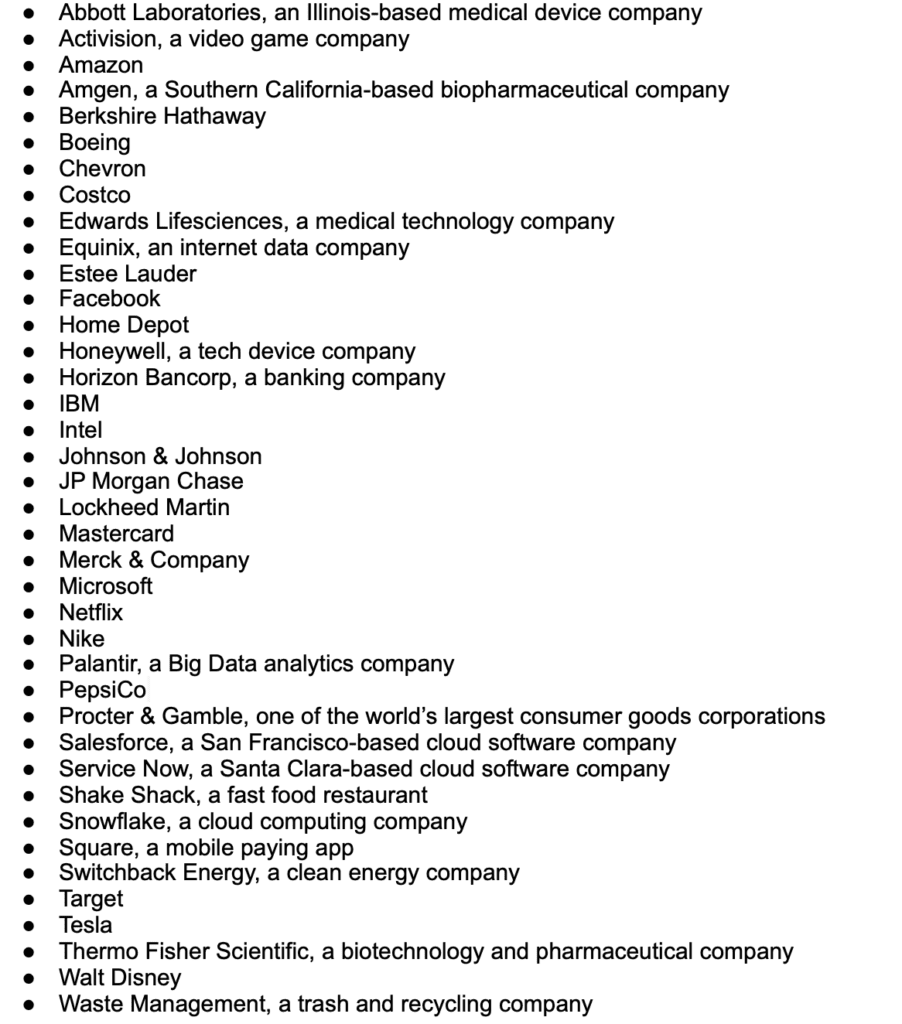 Cohen, who represents District 4, owned stock in four different companies in 2020 including Alphabet, the parent company of Google. Cohen sold his stock in Alphabet shortly after taking office.

Cohen tweeted on Monday that he got rid of his Google stock when he took office in 2021.

Immediately upon joining council, I met with the legal department to discuss possible conflicts. I have now sold all my shares of Google stock and only continue to own the three other stocks mentioned. https://t.co/WTukgwLa01

Mahan, who represents District 10, only owned stock in social media company Pinterest in 2020. Mahan told San José Spotlight that he has since sold his shares and does not own any other stock.

According to Fellner, smaller legislative bodies don’t have much sway over large corporations like Amazon, so state-required disclosure and ensuring that councilmembers are aware of what stocks they own should be enough to stave off possible conflicts of interest.

“Transparency is always good and if there’s something that’s really on the nose they should be disclosing it,” Fellner said. “But it’s hard for me to think of a lot of things that a City Council can do in a way that’s going to benefit a corporation that you would really need council people to disclose their stock holdings.”

Jones said he hopes other elected officials will follow his lead of moving stocks into mutual funds or index funds, saying it would “reduce the amount of stress.”

“Obviously that’s up to the person’s discretion, but there are stocks that are individual stocks you can own that the city will never make decisions on,” Jones said. “I think those strategies would probably be the best.”