One in 10 Santa Clara County residents are refusing a COVID-19 vaccine due to fear of side effects or safety concerns, misinformation and scheduling issues—a problem that county health officials are quickly trying to ameliorate.

Misinformation still persists, researchers hired by the county discovered, with 19% of county residents surveyed believing vaccines can give you COVID-19. Many others don’t understand that vaccines are free.

The new data released this week about vaccine hesitancy in Santa Clara County reveals systemic challenges of access and a lack of outreach about vaccine facts.

The top three reasons why county residents are saying no to vaccines are fear of side effects or safety concerns, not having done enough research and not having enough time or availability, the survey found. 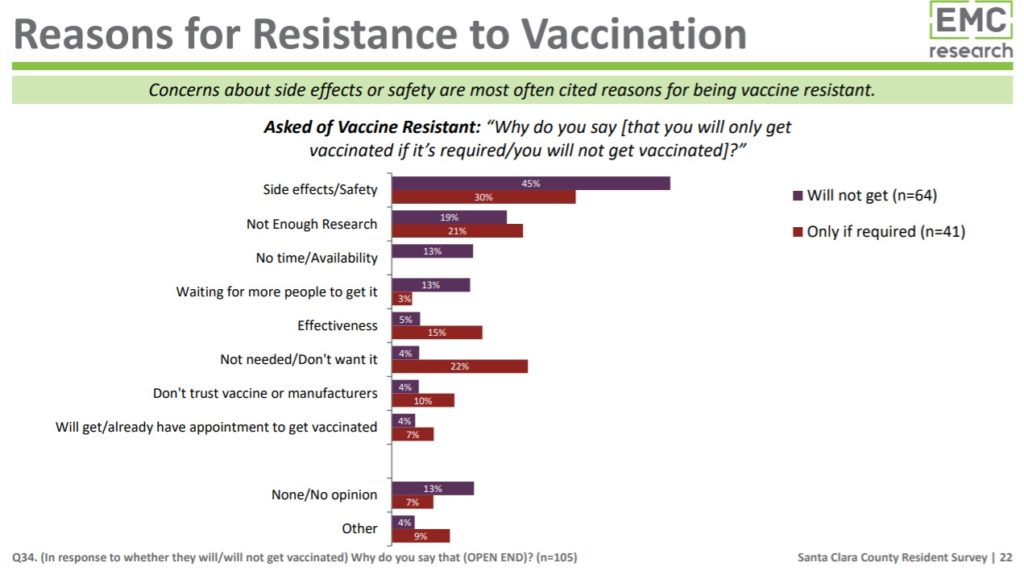 In a survey size of 1,000 residents, about one out of every 10 Santa Clara County residents reported being vaccine resistant. Of those, 57% of respondents said there was “nothing” that could change their mind about getting a vaccine. About 24% of respondents who said they wouldn’t get the vaccine said that more time and research or full FDA approval could change their mind.

The survey, conducted from April 15-22 by telephone and email, had a margin of error of about 3%.

Among those who said they will wait to get the vaccine, nearly half of respondents said they were worried about side effects and safety, while another 19% said they wanted to do more research. Other top reasons included a lack of schedule availability and wanting to wait for more people to get the vaccine before them.

Johnson & Johnson vaccine back on in Santa Clara County

To address accessibility concerns, Supervisor Cindy Chavez suggested scheduling family appointments so everyone can get vaccinated at once.

“We’ve told people just show up, you don’t need an appointment,”  Chavez said. “I do think maybe having a family appointment day on Saturdays or Sundays might be a way to get more interest from families.”

Supervisors Tuesday also suggested increasing education efforts to alleviate fears of side effects and reduce the impact of misinformation circulating in the community.

In January, Santa Clara County announced its goal to vaccinate 85% of residents with both doses of the COVID-19 vaccine by Aug. 1. The county is just about halfway to its goal with less than three months to go.

More than 477,000 county residents have not received a single dose of any COVID-19 vaccine. The data shows the highest rate of unvaccinated residents are males ages 18-29 and 50-64. In response, the county has begun male-targeted vaccination ads on radio and television, particularly during sports broadcasts.

“The vaccine supplies, thank goodness, are much improved over the last several weeks… But our demand for vaccines now has slowed,” said Dr. Marty Fenstersheib, COVID-19 testing officer for Santa Clara County. “The next good thing, now we’ve seen the equity gap narrowing in the vaccinated population. But we will also have additional populations to vaccinate as the 12- to 15-year-olds will probably be authorized to be vaccinated sometime late next week.”

With the expansion of age eligibility, more than 100,000 county residents will be added to the vaccine eligible population.

COVID outbreaks hit communities of color hard during the pandemic. County leaders for weeks agonized about how to ensure vaccine distribution was targeted toward communities that had suffered most.

Asians are leading all other groups in vaccinations, with more than 85% of the population vaccinated in multiple age groups. Asian residents ages 16 and 17 are only about half vaccinated, though county outreach efforts aim to increase vaccination rates among all youth in the coming weeks.

County supervisors also worry about vaccine equity among teens, which has the largest gaps of vaccine rates among racial groups.

Chavez suggested the county do more focus groups with parents to refine how outreach efforts are done. 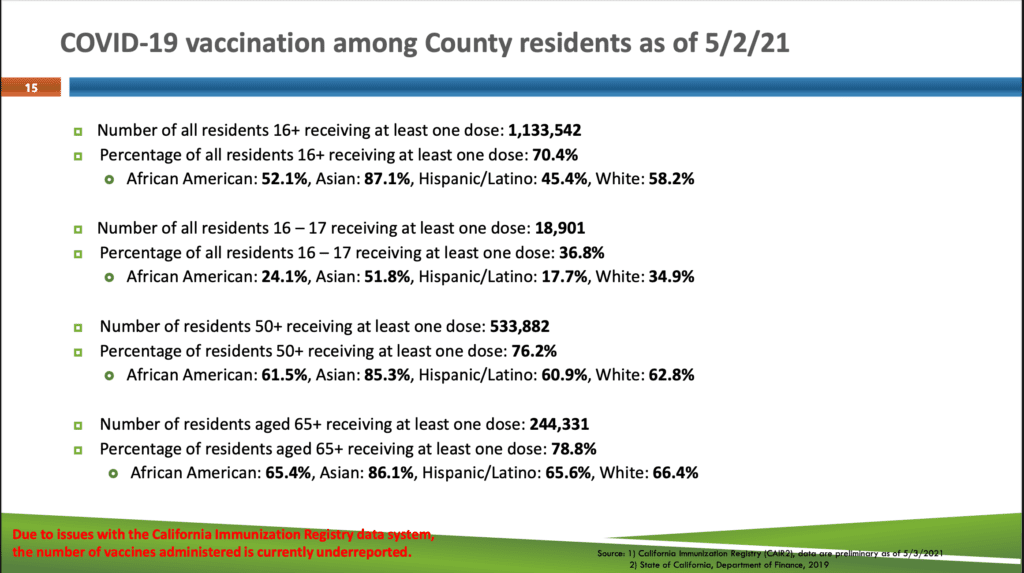 County officials issued a call for youth of the South Bay to get inoculated. According to county data, only one in three teens age 16 to 17 are vaccinated since becoming eligible in mid-April. In the Latinx community, those numbers drop significantly—only one in 10 of 16- and 17-year-olds are vaccinated.

Recent efforts to boost numbers include hosting vaccine clinics on high school campuses and even a “youth night” vaccination event at Levi’s Stadium from May 11 to May 13. In the next several weeks, the county’s health system will begin rolling out more mobile vaccine clinics to reach low- and middle-income workers and expanded evening hours for mass vaccination sites and mobile clinics.

Another challenge the county faces is people getting one shot—then disappearing.

As of the first week of May, about 8% of first-dose recipients didn’t return for their scheduled second dose of either the two-shot Moderna or Pfizer vaccine.

But officials are optimistic because more than 70% of county residents age 16 and older are inoculated with at least their first dose. Nearly 44% are fully vaccinated, according to county data.