More than a decade ago, Mayor Sam Liccardo was among several officials sued over their use of private emails to conduct public business. Now, the attorney who successfully argued the case against the city worries Liccardo is at it again.

San Francisco attorney Karl Olson, representing San José Spotlight, sent a letter last Friday to press Liccardo to not destroy any emails, following this news organization’s exclusive report last month on how the mayor attempted to bypass public records law by directing a resident to email his private Gmail account and then deleting their correspondence from his government email.

“We don’t normally, and we don’t lightly, urge the mayors of large cities not to break the law,” the letter reads, “but given Mayor Liccardo’s past promiscuous use of his private electronic devices to conduct public business—which has already led to a California Supreme Court ruling against him and the city—and apparent destruction of at least one record already, we are greatly concerned that he may be in the process of, or about to, destroy or secrete the records we have requested.”

In 2009, a San Jose activist sued the city and its elected officials, including then-Councilmember Liccardo for withholding records on private devices related to a redevelopment plan in downtown. San Jose argued that the state’s open records law did not apply to private devices or accounts. The case escalated to the California Supreme Court in 2017, where the court unanimously ruled against the city, effectively closing a longstanding loophole in state law. Olson, along with downtown San Jose attorney Jim McManis, successfully argued for the disclosure of private emails in the case.

“If communications sent through personal accounts were categorically excluded from (California Public Records Act), government officials could hide their most sensitive, and potentially damning, discussions in such accounts,” the ruling reads.

Four years later, Liccardo appears to have reverted back to his old ways.

The violation uncovered by this news organization traces back to Jan. 12, when Liccardo directed San Jose resident Scott Largent to email his personal Gmail account to discuss concerns about the city’s police and code enforcement departments. The mayor vowed to delete the email from his public account, despite the fact that the law has protections for whistleblowers like Largent. When San José Spotlight requested those emails on June 24, the city responded that no records existed—from any of Liccardo’s accounts.

But after learning that San José Spotlight had copies of the emails, an official from the mayor’s office said the public records request was “prematurely” closed out. The city finally released some of the emails on Aug. 9—nearly two months after the original request. The emails were heavily redacted, and the public email deleted by Liccardo was missing.

Liccardo’s use of private email to conduct city business sounded the alarm for media attorneys and free speech advocates who are now demanding the city release all of his private emails dealing with public business.

The city asked for more time to respond to Olson’s letter, with a deadline of Aug. 23. This week city officials asked Olson to narrow down the dates of the emails and topics.

Liccardo has repeatedly refused to comment on the issue. A city lawyer defended him instead.

“The mayor handled the email at issue appropriately and lawfully,” Assistant City Attorney Kevin Fisher said in an email statement in July, adding that the city does not require for all correspondence to be retained.

California’s Public Records Act, passed in 1968 and modeled after the federal Freedom of Information Act, is designed to allow access to government documents and communications related to public business.

“The law exists as a fundamental check on government bodies by the public,” Sean McMorris, a policy consultant to watchdog group California Common Cause, told San José Spotlight. “The essence of democracy is that people are allowed to participate in their government.”

That means residents can run for public office, speak freely about their concerns and have the right to know what public officials and agencies are doing, McMorris said.

“It harms public transparency and democracy in general if public officials or governmental entities are doing things in secret,” McMorris said. “We need to know how our government operates for various reasons… We have the right to know.”

Not all records from public agencies can be released, however. The law has a long list of exemptions to protect privacy, including documents related to an active lawsuit, medical records and personal information, among others, Barsotti said.

When withholding records, public agencies must explain why by citing an exemption or prove that releasing the records would cause harm that outweighs the benefits of disclosure, McMorris said.

Emails and communications about city business are generally not considered exempt. Public agencies can redact parts of documents—such as home addresses and medical records—but must still allow public access to the remainder of the documents, the state law says.

In Liccardo’s case, his emails with a resident would not qualify for an exemption just because they are on a private account, as clearly ruled in the 2017 Supreme Court case, McMorris said.

Olson, who’s representing San José Spotlight in demanding access to the mayor’s private emails, suspects that Liccardo’s use of private emails is widespread.

Federal law requires public officials to copy and forward any communications related to public business to an official account, Olson said in the letter.

“If Mayor Liccardo had simply used or copied a government account to conduct public business, a search of his private phone would not be required,” Olson’s letter reads. “Rather, it would appear that extensive use of his private account seems designed to, in the words of the unanimous California Supreme Court, ‘put an increasing amount of information beyond the public’s grasp.’” 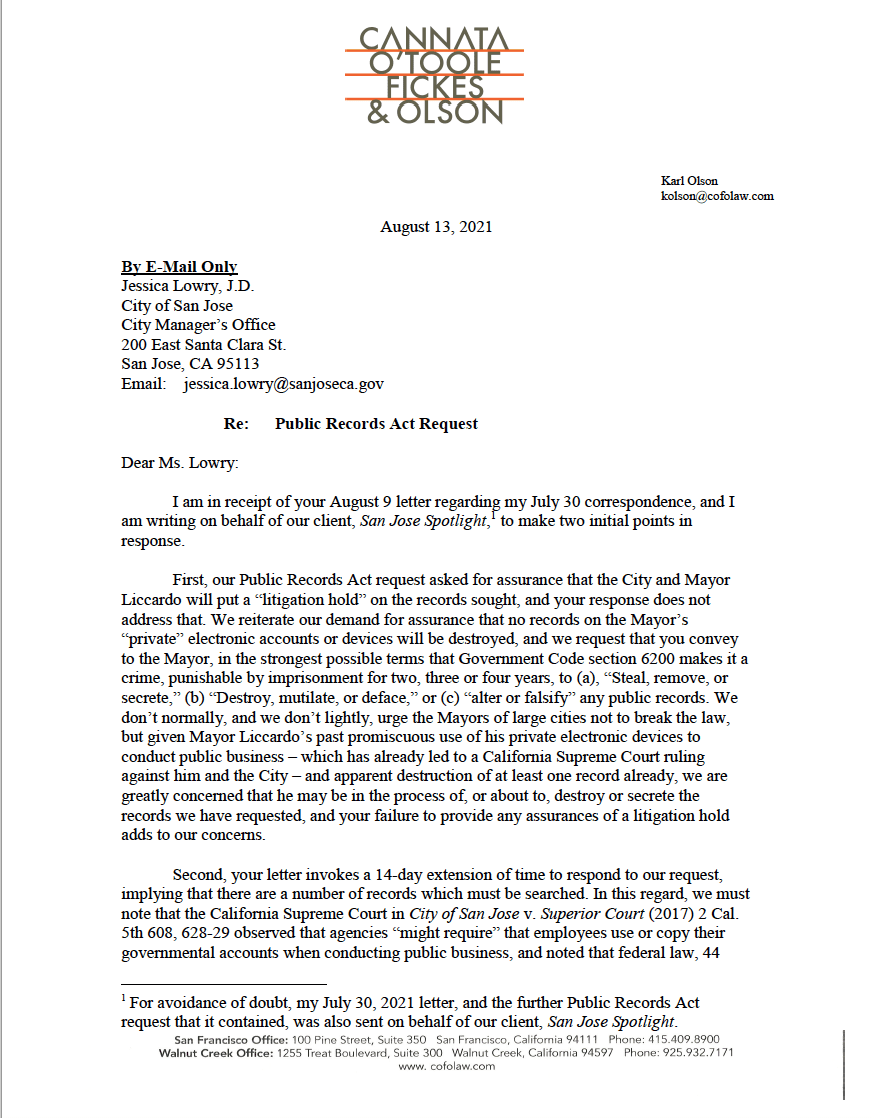