In the heart of Silicon Valley, local policies and laws, especially on land use and the economy, shape our way of life. But key policy discussions don’t always happen in public.

Despite a global pandemic shuttering in-person meetings for more than a year, a data analysis by San José Spotlight found lobbying remains to be going strong — even if it’s not happening inside City Hall.

A lobbyist reported to have routine phone calls with the mayor and his chief of staff almost every Saturday between January and August last year, while another contacted city officials nearly 500 times since Jan. 1, 2020, an analysis of lobbyists’ weekly reports by San José Spotlight found.

In at least one case, a team of Google lobbyists talked to roughly 20 councilmembers and city officials 114 times in a span of a week this month, according to the reports.

In another case, a lobbyist for DoorDash arranged meetings with six out of 11 councilmembers in one day in May 2020 to discuss a temporary cap on food delivery fees.

That raised questions of a potential violation of the state’s Brown Act, which prohibits a majority of a legislative body to meet without public notice.

“Could I say it’s for sure a violation? No,” said Jim McManis, a longtime attorney who sued the city—and won—in 2017 over a violation of public meetings law. “But it certainly raises a question in my mind.”

In 2007, San Jose passed transparency laws requiring lobbyists to register with the city, pay annual fees and file weekly reports disclosing which city leaders and politicians they’re meeting with and why. Those disclosures should include emails or letters, scheduled or unscheduled phone calls and meetings.

In many cases, key policy decisions were made just days after San Jose councilmembers or their aides met or took calls from lobbyists. 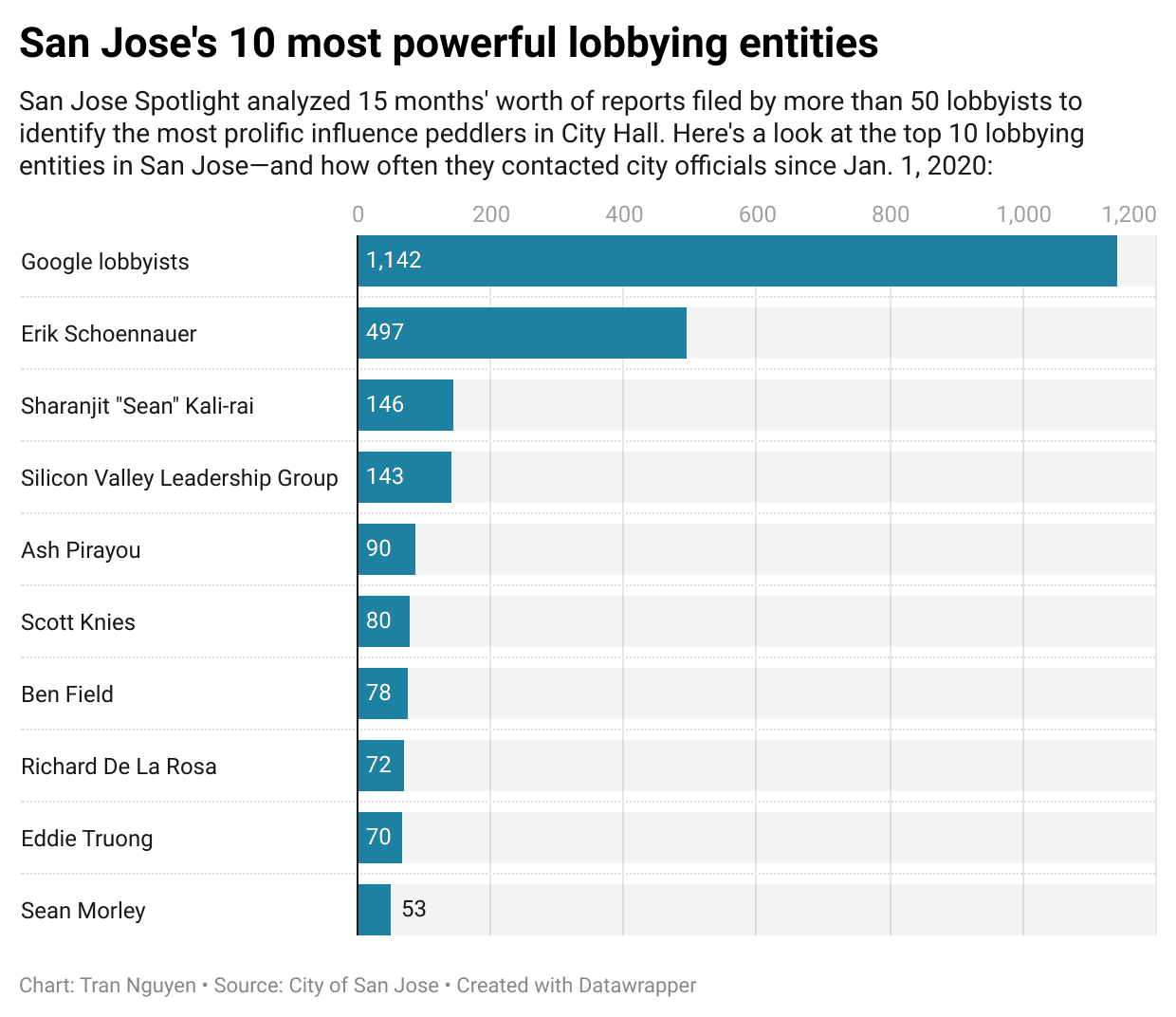 With big plans for a 80-acre megacampus near the city’s downtown, giant tech company Google enlists a group of local lobbyists to help its executives meet with right people in City Hall—often.

Between Jan. 1, 2020 and March 21, 2021, Google contacted city officials more than 1,100 times. Earlier this month, Google’s executives spent every day of the week meeting multiple times with 18 city leaders, including seven councilmembers. That accounts for 114 contacts.

Google’s communications often involve meetings, though it’s not clear if they met in person or virtually due to COVID-19.

The two had roughly a dozen “unscheduled” phone calls this past year.

Schoennauer is a partner at The Schoennauer Company founded by his father, Gary, who served as the city’s planning director for decades. The duo has extensive experience in land use policy and a personal relationship with Liccardo.

Since Jan.1, 2020, Schoennauer has contacted city leaders nearly 500 times for more than 30 clients. The discussions involve numerous topics, including a major project at San Jose flea market’s site, the redevelopment plan of the El Paseo Shopping Center and the Google campus proposal.

Schoennauer relies mostly on emails but also manages to get city officials’ attention when he needs.

Just days before City Council unanimously voted to approve an agreement related to the closure of the Winchester Ranch Mobile Home Park last year, Schoennauer, lobbying for the project’s developer, sent emails to 24 city officials, including the entire council, met with nine lawmakers and made four more calls in a span of a week.

Kali-rai was busiest when he negotiated the contract for Republic Services, logging 51 interactions with city leaders. He also spent much of last spring talking to City Hall about the ban of storefront recreational marijuana sales under a shelter-in-place order and, this year, advocated often to allow dispensaries to open multiple locations and expand into retail centers.

One of the region’s most prominent business trade organizations, SVLG lobbyists contacted city leaders 143 times this past year.

Its former president and CEO Carl Guardino, who left his post of 24 years last August, talked regularly with councilmembers during the first eight months of 2020. During the same period, Guardino spoke on the phone with Liccardo and the mayor’s chief of staff almost every Saturday. The reports do not include the topics of these conversations.

After a San José Spotlight report in September revealed how the group failed to disclose topics for lobbyist meetings, a requirement of the weekly reports, it began disclosing topics being discussed with city officials.

A partner at Rutan & Tucker, Pirayou has years of experience in land use and government agency law. He contacted City Hall 90 times in total since Jan. 2020.

Pirayou called and emailed more than dozen city officials 44 times in January last year on behalf of MHC Operating. In one instance, He emailed Jim Reed, Liccardo’s chief of staff, eight times in one day. The efforts came just days prior to the council’s unanimous vote to allows residents at Westwinds Park to stay on the property despite the construction of the new condos.

He also communicated sparingly with Councilmember Dev Davis’ office about the Westfield malls and Stevens Creek Line throughout last year. It’s not clear what particular topics were discussed.

Since Unibail-Rodamco-Westfield announced its plan to exit the U.S. due to economic downturn brought by the pandemic, Pirayou has started emailing Kelly Klein, Liccardo’s director of land use and economic development, and the office of Councilmember Matt Mahan more often for reasons not disclosed.

Knies, the executive director of the San Jose Downtown Association, met with and talked often to the city’s downtown manager Blage Zelalich, the mayor’s chief land use officer Kelly Kline and city councilors, especially with downtown Councilmember Raul Peralez. He also talked to Liccardo about once a month since last March.

Those calls and meetings add up to 80 times since January 2020.

Field served as head of South Bay Labor Council for nine years before leaving last July. He talked often to Councilmembers Magdalena Carrasco, Maya Esparza, Sergio Jimenez, Raul Peralez and Sylvia Arenas on a wide range of topics, including San Jose’s Fair Elections Initiative, which would have moved mayoral elections to presidential election years and prohibited campaign contributions from certain special interests, and a strong mayor measure, which would’ve extended Liccardo’s term by two years and given him power to hire and fire city staff.

Field contacted city leaders via phone calls and texts 78 times between January and July. He has not filed a weekly report since his departure from the powerful labor coalition, as new executive officer Jean Cohen took over. She has made 13 contacts since November, often with Councilmembers Jimenez, Arenas, and Foley.

He has been busiest lobbying for Firefighter Air Coalition and Rescue Air Systems, attempting to sway the city to keep air refilling stations for firefighters in high-rises.

De La Rosa also called and met city leaders 21 times for Urban Catalyst since it hired him in August. According to his reports, he pushed for the approval of multiple projects and advocated for policies that would benefit the downtown developer, including “reasonable” commercial development fees for affordable housing.

An in-house lobbyist for The Silicon Valley Organization, Truong makes many calls to city leaders on a wide range of topics, including paid sick leave policy, fee caps on app-based food delivery and hazard pay.

In June, he called five councilmembers and Liccardo’s Chief of Staff Jim Reed in a span of two days over a ballot measure on campaign finance reform.

In another case, Truong met with Councilmember Foley and two of her aides four days ahead of a City Council hearing on a local car wash project in her district. After the meeting, Foley endorsed the project in a memo. The council voted unanimously for the project to move forward.

Co-founder and principal of The Morley Bros., Morley works closely with his brother, Eric Morley, for four real estate clients, including LBA Realty and Weingarten Realty, which is redeveloping Cambrian Park Plaza.

The Morleys often met with and called city planning commissioners and Kline, who’s with the mayor’s office, about development permits and projects.

According to the 34 weekly reports since Jan. 2020, Morley has called and met with Kline about 30 times over a potential hotel project on Trimble Road. For Weingarten Realty, he has also started meeting with and calling the office of Councilmember Foley this year over the redevelopment project.