CoronavirusSan Jose
by Eduardo Cuevas
Health officials from across the Bay Area gathered Monday to deliver a shelter in place order to Bay Area residents, an order aimed at slowing the spread of the novel coronavirus. Photo by Katie Lauer.

Santa Clara County officials on Thursday disputed projections in a San Jose staff presentation earlier in the week that estimated the county could see up to 2,000 novel coronavirus-related deaths within 12 weeks.

The projected numbers, deemed the “best-case scenario,” dwarf the county’s 19 deaths and 542 confirmed cases of COVID-19, the disease caused by the virus, as of Thursday.

During Tuesday’s San Jose City Council meeting, Deputy City Manager Kip Harkness told lawmakers that the county could see 2,000 deaths by the end of May despite steps to reduce the exposure and spread of COVID-19 in a presentation on preliminary modeling, as the Mercury News reported. These steps have included the shelter in place order by county health officials and shelter at home issued by state Gov. Gavin Newsom.

“Even in the best-case scenario, we were looking at the order — in the next 12 weeks — of 2,000 potential deaths directly from COVID-19,” Harkness told the council. 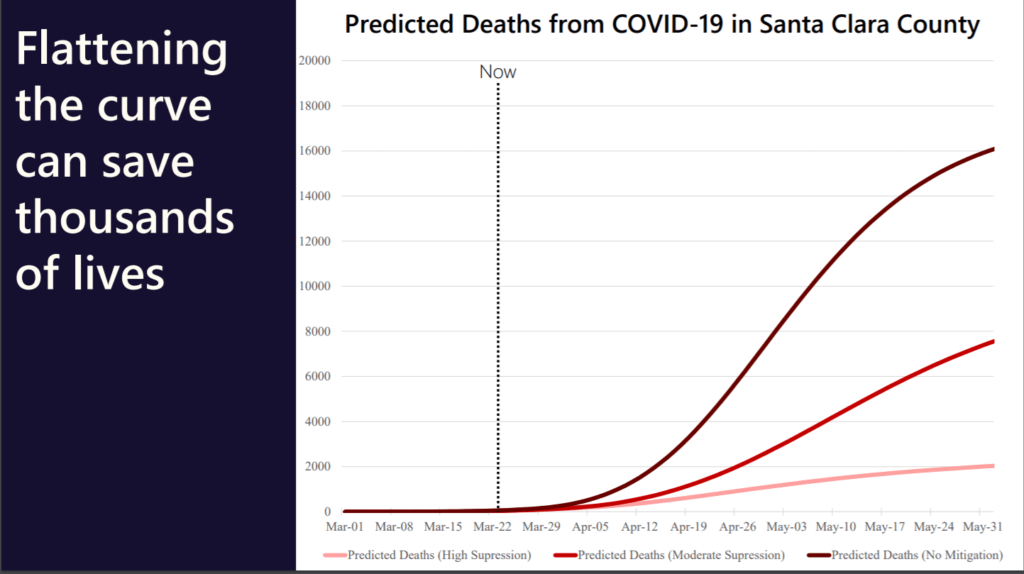 Harkness also said the lack of testing in the county has undercounted reported cases by at least 25 times, giving a “false sense sense of security” of how many infected residents there are.

He said the key to bend the curve of the virus’ spread is following public health orders to shelter-in-place, limiting mass gatherings and social distancing, among other actions taken by county Public Health Officer Dr. Sara Cody.

Within the next three weeks, the county can also expect the most severe of the case surges in healthcare systems, Harkness said. This requires implementing all the public health measures taken at full scale.

“The model shared by the city of San Jose projecting deaths and future case counts of COVID-19 was not produced, reviewed, or vetted by the county of Santa Clara,” the county’s statement said. “The county of Santa Clara continues to actively assess the situation and take necessary actions to slow the spread of the novel coronavirus in our community and protect those most at risk for severe illness.”

Still, on Tuesday, county administrators estimated during a Santa Clara County Board of Supervisors meeting there may be anywhere from 5,000 to 10,000 infected people countywide. The scale of potential COVID-19 confirmed cases will become more clear now that Santa Clara County is requiring private and commercial health labs to report all testing activity — both negative and positive results.

“What we know based on what we currently have, roughly speaking, there must be at least 5,000 residents of Santa Clara County that are infected, maybe as many as 10,000,” County Executive Jeff Smith told supervisors via teleconference Tuesday. “The 80 percent of the infected individuals in this disease have minimal or mild symptoms, so they can’t be really identified just by looking at them or even just by symptomatology.”

“This information about the predicted number of cases is based on the city of San Jose projections, and are preliminary estimates,” Sykes said. “They show how effective the county’s orders are, in terms of social distancing, and how we can save a lot of lives if the community is diligent in following the county’s health orders.”

This article was updated with more information.