In the heart of tech-fueled wealth in Silicon Valley, teachers are living in their cars, working side jobs or living in crowded apartments with multiple roommates.

Cameron Clarno, a choir teacher at Fischer Middle School, has lived in an RV since the start of the school year after moving from his 3-bedroom, 2-bathroom home in Redding. He’ll be reunited with his wife and 5- and 8-year-old daughters next month after finally finding a home South San Jose.

Allen at Steinbeck Elementary teacher Renata Sanchez, who is a Stanford graduate and has two Master’s degrees, drives for DoorDash in the evenings to help her expenses. She said 45 percent of her salary goes to rent in North San Jose. As a third-generation educator, every year she questions her ability to reach the 35-year teaching milestone her mother has.

Matthew Seymour, a third grade teacher at Hacienda Environmental Science Magnet, has dealt with a range of alcoholic, racist and homophobic roommates while living near Alum Rock under a private landlord. “When you’re living in these situations with emotional baggage,” he said, “you’re not emotionally prepared to deal with your students.”

These are just a few of the stories South Bay teachers shared during a town hall Tuesday night at the Santa Clara County Office of Education. The meeting, moderated by Santa Clara County Board of Supervisors President Joe Simitian, explored how the housing crisis has affected school districts and what – if anything – can be done to help.

“I think having people share their challenges and stories living in this area is very powerful and important,” Dewan said. “It’s an all hands on deck situation. This is the only way – we’re not just going to talk about this, but get some practical solutions moving forward.”

Bernhardt said the exodus of experienced teachers from Silicon Valley is a growing problem.

“They can do the same job for similar salaries in lower costs of living areas,” he said. “They often say, ‘You should pay me more.’ I would love to be able to do that, however, we can’t control our own revenue. We then look at other potential policy solutions or paths to homeownership.”

Zwick said one such effort is the Housing Trust’s Empowered Home Buyers Program, which was adopted by county lawmakers as part of Measure A.

“The problem that we’re trying to solve is to help provide enough down-payment assistance to more folks who are what we like to call moderate income,” Zwick said, whose parents and family members are teachers and classroom aides.

He said an example of that moderate income status would be a family of four earning up to 120 percent of the area median income, which is around $150,000 in Santa Clara County. That can help lead to ownership of around 500 homes and condos priced up to $750,000.

Perkins said Facebook, and tech companies like it, have a responsibility to tackle the issue, too. She said that Facebook has contributed roughly $30 million to housing and specifically teacher housing over the past several years.

“Tech companies are a part of the community along with everyone else,” Perkins said. “This is something that we must address collectively, and it has been very important for us to build within the community.”

Chaffin said that 99 percent of affordable housing is being built on tax credits for residents earning around $55,000 a year. Teachers tend to make more than that, especially when they’re married or live with others, so they no longer qualify.

“What’s really important is coming up with an alternative financing model for this missing middle category,” Chaffin said. “Luckily, that’s something I’ve been working on for the last four years, and there are now projects coming along that involve private finance.”

As the son of a public school teacher, Simitian said his father bought a home in Palo Alto with a single income – which he said seems impossible today. 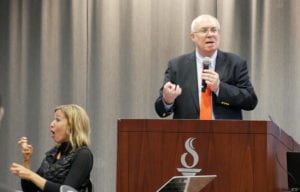 “That seems to them to be such a very distant memory,” Simitian joked. “But how do we get to a better experience for folks like those who shared stories tonight?”

Simitian suggested looking at surplus public land for affordable teacher housing. He said the county has donated its property near Palo Alto, removing $12 million in costs, along with securing additional funding for a housing project from the county, Palo Alto and school districts.

“All of the sudden, we had something that was real,” he said. “As daunting as this seems, on one level it’s really pretty simple. Isn’t there at least a half dozen pieces of surplus or underutilized public property in the county and don’t we have enough money to throw at those projects?”

Along with development partners Mercy Housing and Abode Communities, Simitian said the county will announce another major funding partner soon.

“But we didn’t start down this path to do just one project,” Simitian said. “We know that with everyone in this room and beyond, there are hundreds and hundreds of units that we’re going to have to create. I think it’s imminently doable.”