For thousands of years, indigenous tribes near San Jose have hosted ceremonial practices, prayer and festivities on the land they refer to as Juristac — more commonly known as Sargent Ranch — that they consider as their most sacred spiritual site.

But that might soon be coming to an end, as developers who own the property seek to dig a 200 ft deep sand and gravel mine at the site to operate for the next 30 years.

The Amah Mutsun — the indigenous peoples native to the land where the 317 acre project is proposed — is seeking cultural and historical conservation of the ranch in an effort to curb the potential quarry and other future developments. 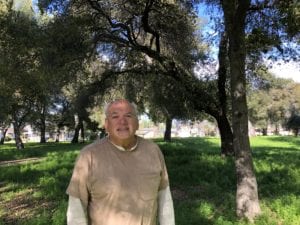 “Our tribe will oppose any development,” says tribal leader Valentin Lopez, who has been actively protesting the project for years. “Haven’t Native Americans given enough already? How much more can we be expected to give?”

Lopez argued that the project would cause irreversible environmental harm to the region and destroy the natural resources that are sacred to the tribe, further tarnishing the tribe’s spiritual and cultural identity.

“The destruction of Native American peoples continues to this day,” added Lopez. “Without any concern from the government, destruction continues.”

Sargent Ranch, located at the southernmost area of Santa Clara County, is a 6,200 acre stretch of land south of Gilroy and west of Highway 101. It’s considered the Amah Mutsun tribe’s most sacred location, where descendants have lived, are buried and have held important ceremonies long before the arrival of the first Europeans.

According to the tribe, the last time the Amah Mutson had access to the lands was in the 19th century. Since then, members have not been able to reconnect with their spiritual roots. If the land is sold for conservation, Lopez says it would give the tribe’s members an opportunity to restore their community gathering place, and “turn it into a tribal park that is used for educational and resource purposes.”

“This is a critical wildlife corridor that links the Santa Cruz mountains with the Diablo Range to the east and the Gabilan Range to the south. We’ve got these really expansive wildlife areas, but animals need to be able to travel between them,” said Legislative Advocacy Director Alice Kaufman from the Committee for Green Foothills.

Animals need Sargent Ranch to move in and out of the Santa Cruz mountains, says Kaufman. Without that access, animals are more likely to become inbred or populations will “contract and collapse.”

“The site itself is a wonderful habitat and there are a number of threatened endangered species,” added Kaufman, who believes that the quarry will change the natural ecosystem that exists beyond repair. “The developers can’t restore it back exactly the way it was because they’ve removed so much of the material that was there. It’s a major alteration of the landscape. The law requires restoration to a certain extent but it never goes back to the way it originally was.”

County officials have been working with the tribe in mediation talks in accordance with the the Native American Historic Resource Protection Act, which requires government officials to consult indigenous tribes on significant cultural or historical sites before developers are allowed to construct there.

There are different approaches to mitigate so that both parties can find a resolution, says urban planner Rob Eastwood, who works for the county. One approach is to set aside specific lands from development that the tribe considers sacred. Another is to provide the tribe access to the site and those lands to perform important ceremonial activities.

“The whole purpose of this process is to determine if there’s tribal resources on that property that will be impacted,” said Eastwood, adding that the county’s environmental impact report will be more detailed on how or if the project will move forward.

But Lopez and other tribe leaders aren’t convinced.

“They’re asking us to put a price on our spirituality. How can we do that,” said Lopez who believes in his tribe’s religion that all living things are his relatives. “We love them, we talk to them, we’re patient with them— the same way a mother cares for her child. That’s how we treat all living things. Asking us to desecrate— that is evil.”

The environmental impact report will be published later this spring, according to Eastwood.