California’s neighboring states are seeing an influx of Silicon Valley companies and workers, and they’re more than happy to tell you about it.

When stay-at-home orders went into place last year in response to the COVID-19 pandemic, many white-collar workers went home to work remotely. This left South Bay business offices empty, and many wondering if it was worth it to stick around the Bay Area when they could go anywhere — for much cheaper.

According to a January LinkedIn report, which lumps in San Jose with the San Francisco Bay Area, hiring was down 7% in December 2020 in the area compared to December of the previous year.

Seattle, Austin and Sacramento have seen the highest upticks in relocating Bay Area workers, the report found, while numbers in nearby cities like Las Vegas and Phoenix have been climbing steadily. 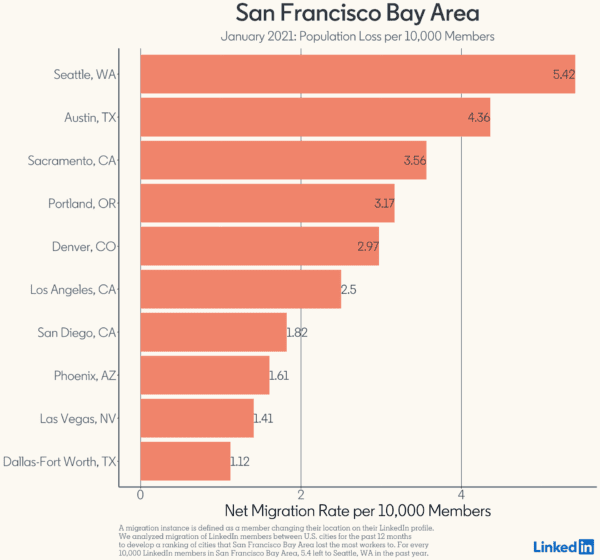 Arizona has seen a huge boom in attracting California companies since the beginning of the COVID-19 pandemic, but it’s building on a trend that started several years earlier.

The Arizona Commerce Authority, the state’s leading economic development organization, lists recruitment of out-of-state companies as one of their top approaches to growing the state’s economy. Since 2015, the authority has worked with nearly 100 companies on projects originating from California that have decided to move or expand operations into Arizona.

According to spokesperson Connie Weber, almost a third of those businesses moved to Arizona between March 2020 and January. That’s double the number of businesses in the same time frame a year earlier.

“Business decision-makers in California have expressed frustration over cumbersome and costly regulations in California,” Weber said. “Business leaders also cited a desire for affordable housing for their employees as reasons to move operations to Arizona.”

San Jose-based Align Technology, famous for its Invisalign braces, established its new global headquarters in Tempe, a suburb outside of Phoenix in January. Most of the company’s top leadership, including the CEO, CFO and vice president of human resources, made the move to Arizona.

Employees were allowed to choose between staying in San Jose, where some offices are still based, or moving to Arizona.

“We chose Tempe for our new corporate headquarters for many reasons, including its proximity to San Jose, favorable corporate operating environment, low cost of living, and overall quality of life,” said CEO Joe Hogan when the company announced its move.

Even some small Bay Area businesses are making the move to Arizona.

Jennifer Rozen, who lived in San Jose for more than 20 years, owned and operated a chiropractic practice with her sister. In November, she relocated to Gilbert, Arizona, another suburb of Phoenix southeast of the city.

Not only did her family move, but her sister’s family came along, too.

“It was probably four years ago my husband started talking about exiting the Bay Area,” Rozen said. “Some of our reasons included overcrowding, traffic and just an intensity of living that really isn’t experienced anywhere else.”

She said things had changed drastically in San Jose since she had moved there, and she and her family no longer had the same quality of life. It had also become cost prohibitive to run her small business.

While the pandemic and ensuing shutdowns weren’t a deciding factor for Rozen and her family, their decision was “definitely accelerated” because of it, she said.

“(We’re) constantly getting taxed like crazy,” Rozen said. “There’s many factors… Cost of living was (also) a consideration.”

Rozen said they could enjoy the same quality of life for cheaper. Plus, Arizona is still close enough to California to keep in touch with family and friends.

“Living in an area with more conservative politics was important for us too,” Rozen said. “In California I think we’ve been losing many personal freedoms.”

Some states, including Nevada, are capitalizing on people’s willingness to leave the Bay Area. The state’s Reno-Sparks-Tahoe Economic Development Authority is banking on continued exodus of Californian companies and employees.

In some cases, economic development officials even lure companies away.

“The short version is, we’re seeing incredible interest and activity from the Bay Area,” said Mike Kazmierski, the president and CEO of the authority.

The pandemic has prompted the authority to “continue aggressive marketing to California,” as the Golden State continues to be the authority’s top market. The authority has 11 upcoming announcements of business relocations to northern Nevada, nine of which are coming from California. Most of them are in the manufacturing sector.

Meanwhile, the authority is also working on drawing away remote workers with the promise of lower cost of living and higher quality of life.

“You can get to Bay Bridge in three hours from Reno,” Kazmierski said. “You can go skiing at lunch time — it’s 30 minutes to the ski slopes, which we didn’t close on the Nevada side.”

Of course, the big draw for companies is the savings. While an average engineer salary in the Bay Area is about $125,000 or higher, the average salary for the same worker in northern Nevada is between $80,000 to $100,000.

For the technology sector, Kazmierski estimates companies can save 40% on costs in Nevada compared to the Bay Area, including rent, labor, state and local taxes. Other businesses can expect savings between 20% to 30%, Kazmierski said.

The hemorrhaging of talent from the region has the Bay Area Council frustrated.

“Of course, the Bay Area and California have long been inhospitable towards job creation,” said Rufus Jeffris, spokesman for the Bay Area Council, which represents Apple, Google, Facebook, Oracle and a host of other firms.

“There’s not definitive (government) data on what kinds of businesses may be leaving, but unfortunately plenty of anecdotal evidence … that tech companies (HPE, Oracle, Palantir, among others) and investors are among those departing,” Jeffris added. “Although, they are not leaving completely — just moving their (headquarters), but retaining workforce here.”

For example, both the investment firm Charles Schwab and health care supplier McKesson have moved their headquarters from San Francisco, but will retain “significant presence” in the Bay Area, according to the Bay Area Council.

But Jeffris said the many competitive advantages the Bay Area offers — good weather, talent density and access to capital — have helped counter or blunt the “worst impacts of our awful business climate — historic housing shortage, high taxes, onerous regulation, homelessness, and on and on and on,” Jeffris said.

Then COVID-19 came along, and exposed more of the Bay Area’s vulnerabilities: prohibitive costs of living, extreme weather and heavy traffic congestion among them.

The Bay Area Council is launching a new statewide business climate initiative to address these issues and raise awareness among elected leaders and policymakers about the threat jobs and business departures pose for California.

“We’ve been frustrated that there seems to be little urgency or alarm that we’re headed down a very dangerous path,” Jeffris said.