In the midst of the COVID-19 vaccine rollout, health officials warned that a new strain of the virus — linked to several large local outbreaks  — is spreading across Santa Clara County. Many are left wondering what that means for the vaccine and its efficacy against the new strain.

And will scientists need to make different vaccines? Experts say, maybe. But they are urging residents to continue getting vaccinated with the available vaccines as the “native” or original strain still poses a threat.

A closer look at the new strain

The variant known as L452R has been circulating around California counties since November. It is thought to make up a quarter of COVID-19 cases studied by local scientists.

Dr. Georges Benjamin, executive director of the American Public Health Association, said he thinks of the new strain of COVID as being more “sticky.” He said it is likely more infectious, meaning a person is more likely to catch it from someone who has COVID-19.

“We don’t believe that it makes you sicker yet, but it does mean that more people will get the disease, or at least get infected from the disease,” he said. How sick a person will get in comparison to the original strain is still unclear.

Dr. Charles Chiu, a virologist and professor of laboratory medicine at University of California, San Francisco, alluded to concerns about the COVID-19 vaccine’s efficacy against the variant in a call last week. “The data is preliminary, but it basically does raise the concern that there may be some impact on the vaccine,” he said.

While the virus is changing “a fair amount,” Benjamin said the changes are not yet substantial enough to escape the current vaccine. However, a recent study on a variant from Africa suggests new strains may be able to skirt the immune response and evade the vaccine.

Biochemist Mark Schwartz said the new variant in Santa Clara County is not replacing the original COVID-19 virus, but is adding another foe to the mix. The new strain results from a mutation in the virus’ genetic code — which helps the virus survive and thrive.

That’s not an unusual phenomenon.

“All viruses mutate. It’s a selection and survival mechanism. The virus mutated as all things do through random chance,” Schwartz said. “Those that survive better than others become the ‘mutated strain.’”

He said a new variant signifies that a virus has taken on a new property — such as being more lethal, less lethal, more infectious or more airborne.

“These strains have shown themselves to spread very rapidly — more rapidly than the native coronavirus,” Schwartz said. “They could have the potential to mutate to something more deadly. I don’t think it’s cause for panic, but it’s something that we have to pay attention to.”

“The reason we get a new flu shot every year is that the virus changes enough that the vaccine we got the year before isn’t as effective,” Benjamin said. “In some years, it changes so much that it’s not effective at all.”

Each year scientists modify flu vaccines to accommodate the new strains. They first grow the virus in a hen’s egg. Then they extract it, kill it and inject the dead virus into the body to create an immune response. But monitoring new strains and cultivating them takes time, according to Schwartz.

Scientists don’t have time to use this method given the speed at which COVID-19 is spreading, so they turned to different technology to combat COVID-19: mRNA vaccines.

While the flu-shot contains the whole virus, the COVID-19 vaccine contains synthesized mRNA — generic material that helps the body create an immune response to fight off COVID-19. 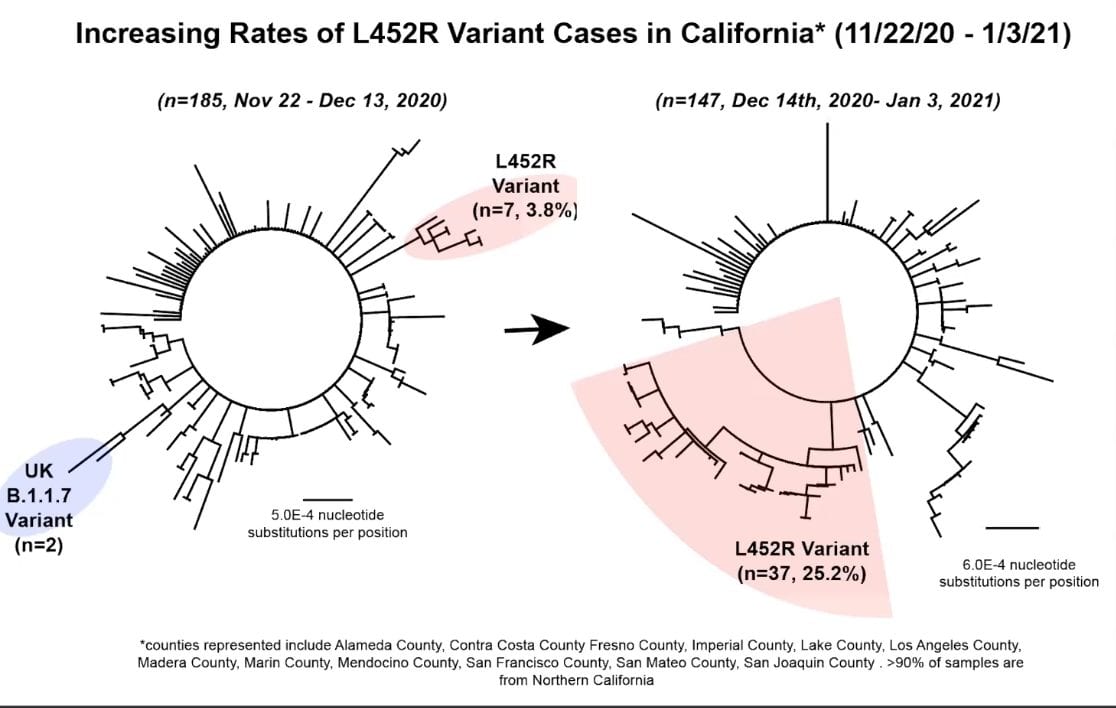 Benjamin said mRNA research has mainly been focused on killing cancer cells and vaccinating against cancer.

“The mRNA technology is amazing,” Benjamin said. “It actually compared to the technology we use to make flu vaccines. I think it’s going to be very effective.” He said the mRNA method will allow for quick adjustments should scientists need to create another vaccine to tackle new strains.

How effective is the current vaccine?

If an individual receives the first round of a COVID-19 vaccine, the shot is about 50% effective after 7-10 days, Benjamin said. Individuals need to get a second shot 7-10 days later which boosts the effectiveness to almost 97%. The vaccine will be fully effective in another 7-10 days after the second shot.

The CDC says receiving the shot will not make an individual sick with COVID-19, though there is risk of allergic reactions caused by an overly-sensitive immune response.

Santa Clara County last week halted use of one batch of the vaccine, Moderna Lot 41L20A, for its potential to cause allergic reactions. Three days later, health officials resumed distribution of the previously paused batch.

The CDC recommends observing patients for 15-30 minutes after vaccination.