Op-ed
by Special to San José Spotlight
Rendering of one of the planned downtown buildings for a digital billboard to be installed by San Jose. Photo courtesy of No Digital Billboards in San Jose.

Imagine large digital billboards looming down from the roofs and walls of the Tech Interactive museum, the McEnery Convention Center, the Museum of Art and other prominent locations—all flashing commercial ads as you enjoy lunch or an event at Plaza de César Chávez.

Such a dystopian vision can be described only as an assault on the city’s historic character, architectural integrity and natural environment. Unfortunately, that may become our new reality sooner than you think.

San Jose intends to permit the erection of at least 22 digital billboards on several landmark public buildings downtown and other freeway-facing locations on city-owned sites in what is called the Downtown Sign Intensification Zone. Digital billboards advertise products and services not available at that location, and are not to be confused with business signs identifying retailers, restaurants and offices.

All this will occur without conducting an Environmental Impact Report (EIR). Back in the day, such impactful projects that were implemented without the benefit of an EIR often resulted in negative environmental consequences.

Passage of the California Environmental Quality Act (CEQA) in 1970 was designed to subject major development to a rigorous environmental review to determine if implementation was acceptable or if changes could be made to the design to mitigate potential concerns. This EIR process was recently applied to the Google Downtown West project planned around the Diridon Station area.

While that was the intent of CEQA, in reality some projects get approved and adopted without undergoing an EIR. Such was the case when the San Jose City Council stacked the deck in favor of erecting digital billboards.

How so? First, by repealing a 35-year ban on new billboards. Then arbitrarily dividing the proposal to allow digital billboards into two phases: 22 billboards on public property and 75 on private property. 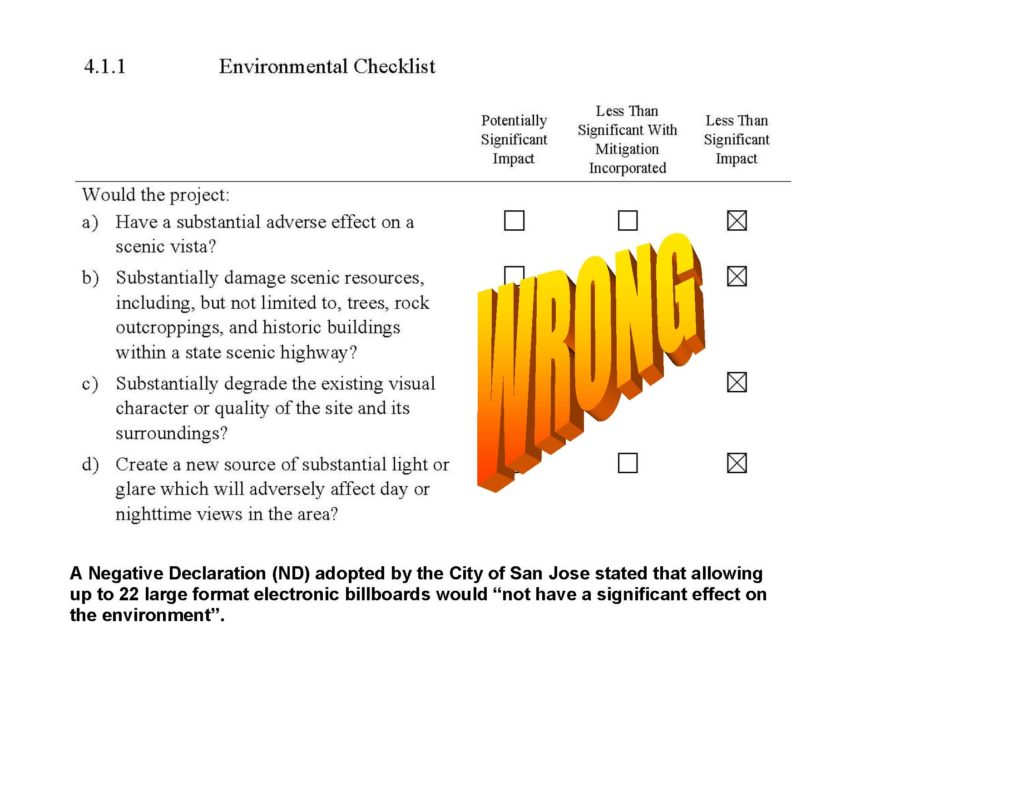 The first phase was declared to have little environmental impact and would not require a formal EIR. Instead, a CEQA review would be done on a case-by-case basis “per project” (e.g., per billboard or per location) though what constitutes that review has not been adequately defined.

The City Council also decided that the larger second phase would necessitate an EIR, based on the larger quantity of signs. This seems like an arbitrary decision. What should be an objective threshold that constitutes a significant environmental impact? Thirty billboards? Fifty? Furthermore, wouldn’t the environmental impact of a digital billboard be the same regardless of who owned the land upon which that billboard was erected?

Aside from local government trying to fast-track its own processes, there is increasing public opposition to digital billboards. As many as 90% of respondents to a city Planning Department survey opposed allowing digital billboards along San Jose freeways and 80% opposed digitals downtown.

Consequently, the City Council put its proposal on hold for private property, thereby eliminating (at least temporarily) any consideration of large digital billboards in an authorized EIR. However, the first phase continues to be implemented for sites on city-owned property.

This means that any serious environmental questions about the aggregate impact of digital billboards in San Jose will not be subject to scrutiny of an EIR.

As each site is awarded to a vendor, the planning department will perform a CEQA review, but this is more of a piecemeal approach.

While we know that billboards will lower property values and encourage graffiti and litter, there is much more we will not know in detail without a comprehensive EIR. That includes the impact of digital billboards on riparian and other ecosystems; nocturnal wildlife, migrating birds, human sleep patterns, use of energy, the generation of greenhouse gases and e-waste, light pollution’s effect on astronomical observations at Lick Observatory and the impact on light sensitive drivers in particular and traffic safety in general.

None of those issues are likely to be adequately addressed without an EIR.

Consequently, No Digital Billboards in San Jose, the leading community group in support of the city’s 1985 ban on new billboards, has formally requested the City Council and officials to immediately cease the implementation of digital billboards on public property.

In addition, given indisputable and pervasive public opposition we ask the City Council to permanently terminate its efforts to erect new billboards on both public and private property and to reinstate the 35-year-old ban on new  billboards throughout the city.

Anything less will turn San Jose into an urban wasteland of in-your-face commercial messages that will make our city unrecognizable and unlivable. Will that be the legacy of this City Council?

Jason Hemp, Les Levitt and John Miller are founders of No Digital  Billboards in San Jose.