As the new year begins in California, so do a set of laws designed to better regulate police departments across the state.  This comes in the wake of protests in 2020 that targeted police misconduct and violent crowd control tactics.

Residents in Santa Clara County will also see a handful of other significant laws coming into play this year, ranging from new requirements for health care appointments to novel rules for building more densely in single-family neighborhoods.

Some of the most significant new laws include a series of police reforms created in the wake of the George Floyd protests in 2020. SB 2 creates a process for decertifying officers who have committed serious misconduct. California was one of four states without a state law to revoke an officer’s certification.

Another law, AB 48, limits police use of rubber bullets and other less lethal weapons at protests unless someone’s life is in danger, and requires departments to release reports on how they use these weapons. The San Jose Police Department changed its policy in 2020 to prohibit the use of rubber bullets as crowd control for nonviolent individuals. Mayor Sam Liccardo pushed to ban them altogether after injuries during demonstrations, but the rest of council voted against this proposal, saying it risked the safety of officers.

Even with these changes, local police reform advocates are skeptical these reforms will do much to address the underlying causes of police violence.

Police use of force was highlighted in a report last year by the independent police auditor, and a group of individuals are suing the city after SJPD allegedly used excessive force on demonstrators during the 2020 protests. 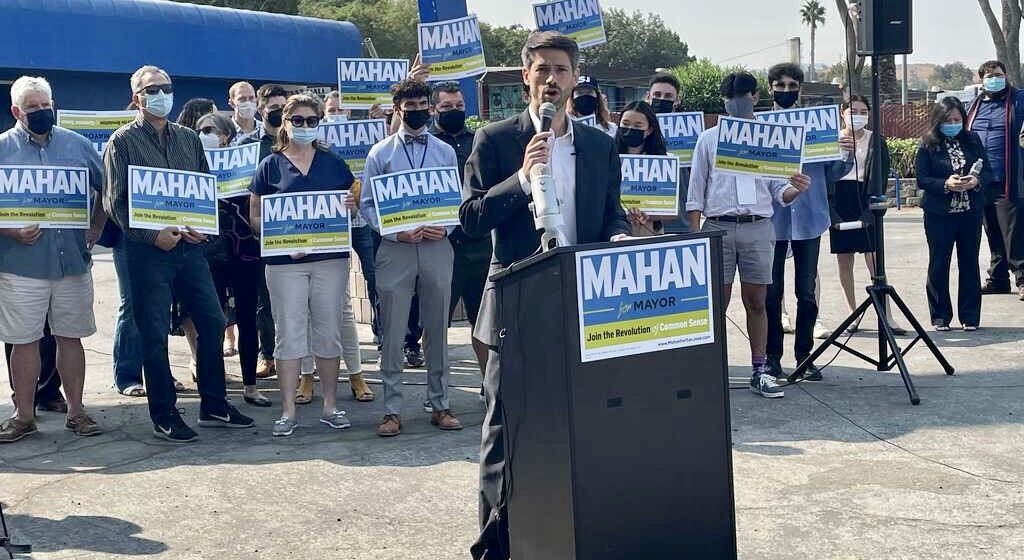 The San Jose Police Officers’ Association previously advocated for a process to ensure individuals unqualified to be officers were not allowed to carry a gun and a badge, said spokesman Tom Saggau.

“Nobody in law enforcement wants somebody who committed a crime, who is not qualified or does not have the right temperament, to be a police officer,” he told San José Spotlight. He added most major police departments in California already disclose the use of less lethal weapons.

Raj Jayadev, co-founder of Silicon Valley De-Bug, said any tool that prevents police officers from engaging in repeated abuses is helpful. But SB 2 only applies to officers convicted of crimes, he noted, which narrows its usefulness. Jayadev wants to see jurisdictions move away from police monitoring—such as passing a law to track use of less lethal weapons at protests—and focus on minimizing or eliminating police interactions with the public.

As an example, he cited AB 118, also known as the Community Response Initiative to Strengthen Emergency Systems Act. This law, which Silicon Valley De-Bug co-sponsored, sets aside millions in state funding for a grant program to support community-based alternatives to police responses, especially for things like mental health calls.

“Those are things that will quite literally save lives,” Jayadev told San José Spotlight, adding Santa Clara County already has its own pilot program.

Another state law, AB 89, raises the age limit to be a police officer from 18 to 21 and imposes a requirement that new officers must have a bachelor’s degree.

SJPD spokesperson Christian Camarillo said the department has always required recruits to be 21 years or older and have a college degree by the time they graduate the academy. He told San José Spotlight the law also contemplates requiring an additional certificate called a modern policing degree. The department anticipates this will  pose a challenge to recruiting efforts and have an impact on hiring, he said.

SB 221—a small but significant change in health care appointments—won’t go into effect until July 1. The law requires providers to offer return appointments to mental health and substance abuse patients no more than 10 days after a previous session.

Victor Ojakian, co-president of the National Alliance of Mental Health-Santa Clara County, but speaking in his personal capacity, said the law will hopefully prevent patients from experiencing excessive gaps between follow-up appointments. Continuity of care with therapists and psychiatrists is critical for individuals transitioning from suicide prevention care or incarceration.

“The bill helps address that by saying not only should a person get care, but they should get continuous care in subsequent appointments done in a timely fashion,” Ojakian told San José Spotlight.

Ojakian said one potential challenge to implementing the bill is the shortage of mental health providers in California. The National Union of Healthcare Workers, which sponsored SB 221, said in a statement that wait times for therapy appointments at Kaiser Permanente range from one to three months.

Also going into effect this year is SB 9—a controversial law that effectively killed single-family zoning across California by permitting denser developments, albeit with many restrictions.

San Jose lawmakers voted to implement SB 9, which will allow homeowners to subdivide single-family lots into two to create up to four housing units per parcel. San Jose was tinkering with a similar local initiative called Opportunity Housing which it opted to abandon in favor of the state law.

The city is still figuring out how to implement the law. Some requirements, such as having developers attest they intend to live in an SB 9 project for at least three years, may be difficult to enforce, while a proposal to examine historical districts for SB 9 housing has provoked a backlash from some residents.