San Jose has reported a steady decline in job vacancies and employee turnover for the last three years, a statistic that city officials say is the result of sweeping efforts to improve employee retention and compensation following an economic downturn in 2012.

Some of the job openings include accountants, electricians, code enforcement officers and park rangers. The Police Department alone has 80 vacancies.

“Overall, city vacancies are on the decline. We expect that we’ll be holding steady by the end of the fiscal year,” said Assistant Director of Human Resources Kelli Parmley. “This is a great place to work. The numbers are going down in terms of resignations and people are more optimistic about employee engagement. To keep people, we need to not only attract but also retain.”

But union leaders who went to battle with City Hall over wages and pensions say the city isn’t being honest about employee retention — and San Jose is still a revolving door for workers.

‘I’m surprised the city is saying that vacancies are declining because the turnover rate is still high,” said Robyn Zamora, executive board member of AFSCME Local 101. “The city is always boasting, but the math is incorrect.”

Zamora expressed skepticism over the city’s turnover rate saying that there’s still too many employee resignations, resulting in a high vacancy rate. And while some vacancies get filled, there are fewer long-term employees and more new hires.

In 2017, city data showed there were 608 resignations. External new hires — workers being employed by the city for the first time and not promoted from within — were 655. 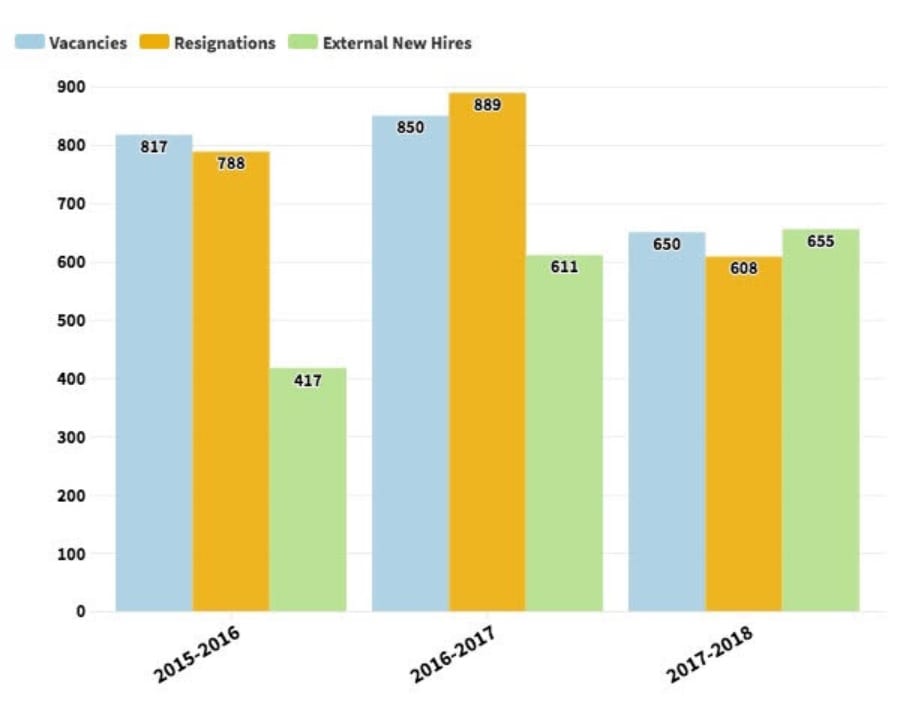 Employee retention is the biggest problem the city faces, said Zamora, and until salary and benefits are made “competitive again,” she said employees will continue leaving for smaller cities with better pay and less work.

Until then, Zamora added, San Jose remains a “training ground” for those employees.

Still more work to do

But Parmley said the city has made many efforts to reinvest in its workers through employee engagement surveys, improved hiring practices and the implementation of a citywide initiative called Powered by People intended to attract potential employees and retain the current workforce.

Restructuring the hiring practice system has granted individual departments the autonomy to hire their own employees — a move that significantly reduced the amount of time it takes to fill a position. Additionally, a greater presence at college career fairs has increased interest in city employment.

Parmley admits that “there’s still a lot of work to do.”

“It takes a little bit of time for people to trust and come back,” said Parmley, adding that salary and benefits have varied as the economy fluctuates.

San Jose often trails its neighbors when it comes to salary compensation.

That’s why, union leaders say, San Jose employees are fleeing for smaller, neighboring cities where they can boost their pay and benefits.

But “total benefits” aren’t talked about enough, Parmley claims. While the city has faced increasing competition from other areas — the county or smaller cities, as well as tech companies such as Facebook and Google — it still offers a strong three-tiered pension system, medical benefits and opportunities for people to save.

The goal, Parmley added, is to convince potential employees to “work for a mission”– a more rewarding experience.

“People right out of college can go to another agency like Sunnyvale or Los Gatos, but they’re never going to have the opportunity to work on the in-depth, complex issues that San Jose has,” she said. “While there will always be competition with other agencies and the private sector, serving the community at large is diverse, complicating and interesting. The secret to San Jose — you can actually make a difference very quickly in the lives of the community.”

The ghost of Measure B

But some argue that city employees are still recovering from massive budget cuts that included Measure B, a 2012 ballot measure that slashed retirement pensions.

While many city officials such as former Mayor Chuck Reed argued that pension reform was necessary to reduce pension debt and save the city money, union representatives were boldly against the move, saying that it would make it increasingly difficult to hire and retain new employees.

“Recruitment and retention will always be a challenge when neighboring agencies provide significantly higher compensation and benefits packages,” said Sean Lovens, a spokesman for the San Jose Firefighters, IAFF Local 230.

According to Lovens, while San Jose firefighter compensation will increase by almost 20 percent by 2022 — 18.75 percent being pensionable — but the department will still be far behind neighboring fire departments in the Bay Area.

“San Jose’s past aggressive stance toward its employees — including laying off 49 firefighters, 10 percent pay cuts, multiple years without any raises and illegal attempts to remove retirement security and disability protections will continue to have a long lasting impact on recruiting efforts,” added Lovens.

“The city has always been proud of their lean workforce — their staff is working an outrageous amount of overtime because a huge portion is cut out,” Zamora said. “Until the city really wants to address a problem they created, they’ll continue to have extremely tired, overworked people all because not enough people are hired or staying.”

Like what you read? Please support our nonprofit newsroom by becoming a sustainable member and subscribing to our newsletter.