Mayor Sam Liccardo claimed a political victory when the San Jose Unified School District announced recently it would reopen for indoor instruction April 21. But advocates say the mayor and his new advocacy group had nothing to do with the decision.

In a mass email from Liccardo’s recently-formed organization Solutions San Jose, he praised the district’s decision and gave thanks to supporters. The group began circulating a petition in February to get students and teachers back to in-person instruction. It has received more than 3,300 signatures.

“It definitely felt like the mayor was potentially trying to score some political points by making an announcement on an issue that really is outside of his jurisdiction,” Bernhardt said.

Solutions San Jose maintains the organization is fighting for equity by lobbying to reopen all schools citywide.

“Only 1 of 18 school districts in San Jose has announced a plan for re-opening; there is still much work to do,” said Cassandra Matter, incoming executive director of Solutions San Jose. “We are giving credit where it belongs — to the parents and the other residents who care about a civil-rights violation of historic proportions and are organizing to stand up for common sense, science and justice by reopening our schools.”

Bernhardt said the mayor and his allies lack the authority to help schools reopen since local school districts must make the final call. San Jose Unified decided enough vaccines will be available to be able to get teachers safely back into the classroom by mid-April, he said.

But not all districts will feel comfortable reopening in the same way, Bernhardt said. While the move made sense for San Jose Unified, it may not make sense for more densely populated low-income neighborhoods in Central and East San Jose.

Liccardo’s email said Solutions San Jose will not stop campaigning until all schools are open. 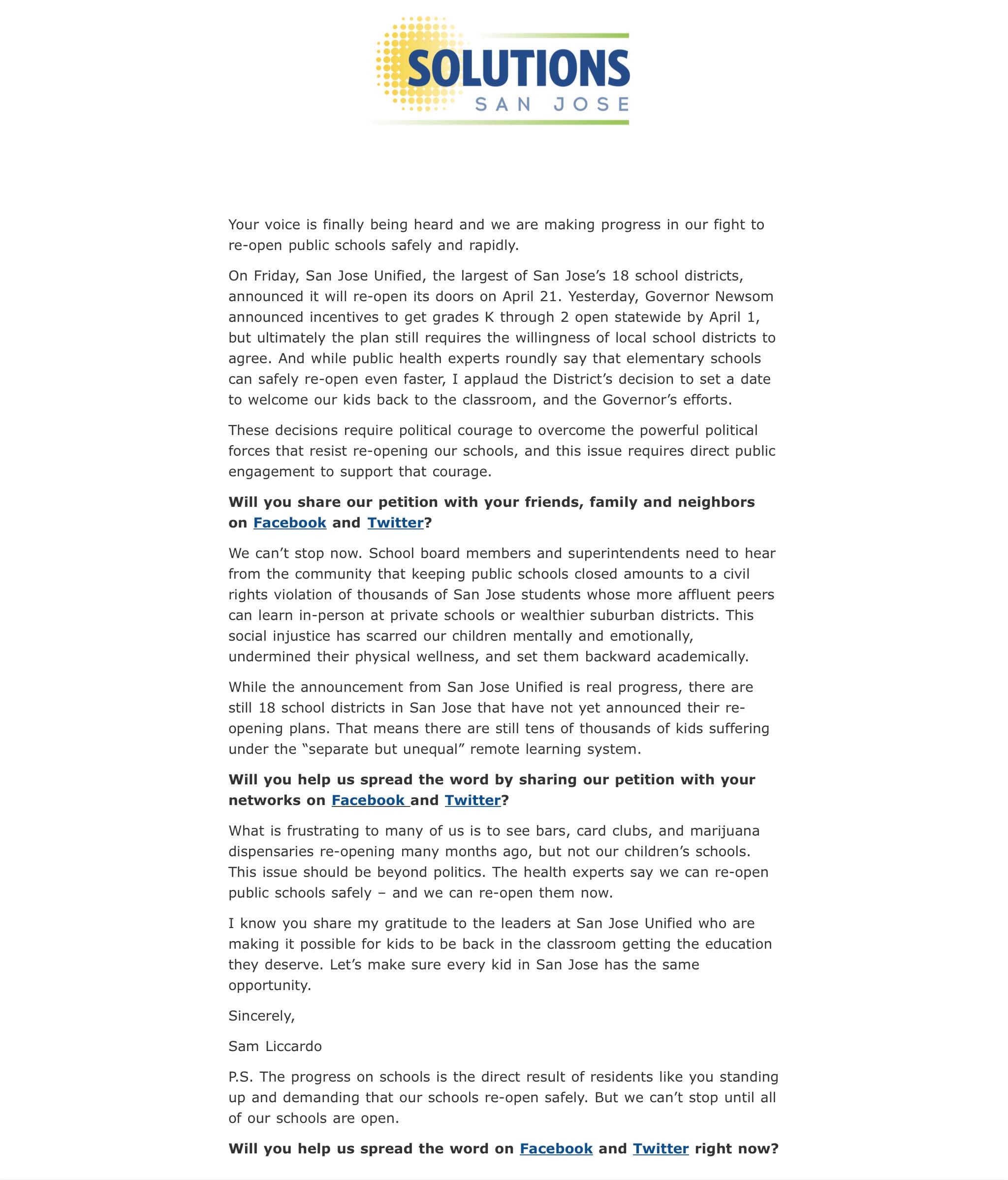 “We have no problem at all with teacher’s unions advocating for their members,” Matter said. “Our issue is with the reality that the kids don’t have a union fighting just as hard and just as effectively for them.”

While children under 16 rarely get very ill from COVID-19, they can. There is currently no vaccine approved for children.

Local teacher Sylvia Liu said she is not comfortable returning to indoor instruction until a strict plan is in place for East Side Union High School District — one of the local districts that will remain closed.

“I eagerly want to go back and teach in person and meet my students. Many of our staff will be vaccinated by Spring as well,” Liu said. “However, when schools do reopen, it must be done safely to protect our students and their families who may not be vaccinated. There is still so much uncertainty for reopening schools, so until there is a plan in place, I’d feel unsafe to return.”

She said many questions about safety, hybrid models of teaching and class capacity remain unanswered.

Sanchez said she learned about Solutions San Jose through Facebook groups that shared Liccardo’s reopening petition and said she had a lot of “conflicting feelings” about the mayor’s charge.

“The intentions are good,” Sanchez said. “He did acknowledge school employees need to be vaccinated but he also continued actions that we see where political figures are trying to get involved in local school boards or governing board decisions.”

She noted Liccardo has a “pattern” of getting involved in decisions he cannot directly influence. She used his push for charter schools as an example.

“I saw this as a continuation of getting involved because he’s in a position of power and really trying to influence decisions and actions that are the responsibility of other people,” she said.

Bernhardt said Solutions San Jose unfairly made assumptions about how the conversations between school advocates were playing out.