As 2021 draws to a close, San Jose officials have concerns about traffic fatalities for the year climbing toward record levels despite ongoing investments in street improvements and educational outreach.

At least 55 people have died in traffic accidents involving pedestrians, cyclists and motorcycles as of Nov. 30, making 2021 one of the deadliest years in the past decade, according to newly-released data from San Jose’s Vision Zero Task Force. Those numbers could potentially rise because fatalities tend to increase during the winter months when streets are darker for longer hours.

San Jose launched Vision Zero in 2015 after 60 people died in traffic accidents the previous year. The goal is to eliminate traffic deaths altogether, but fatalities haven’t dipped below 40 since 2012. Resident Gina LeBlanc, whose son was killed while walking near Curtner Avenue, reminded the task force during a recent meeting that its goal is to get to zero traffic deaths.

“Our numbers are not dropping,” she said at the meeting.

People killed while walking is the biggest category of fatalities, Mintz-Roth said. He added that eight cyclists died in 2021, which he believes is potentially a record for the last five or 10 years. The city also witnessed a record high for motorcycle fatalities, with nine for the year. One-fifth of the fatalities involved homeless people struck by vehicles. The vast majority of deaths—nearly 70%—occurred during dark hours.

Speeding remains a leading contributor to traffic deaths, so the city is boosting its enforcement efforts. In the third quarter of 2020, the San Jose Police Department issued 414 citations; for the third quarter of 2021, the department issued 4,012.  Councilmember Raul Peralez said he knew from personal experience when he was younger that tickets serve as an effective deterrent against speeding.

“It really slowed me down—it did,” Peralez said. “That consequence is really influential to people’s driving habits.” 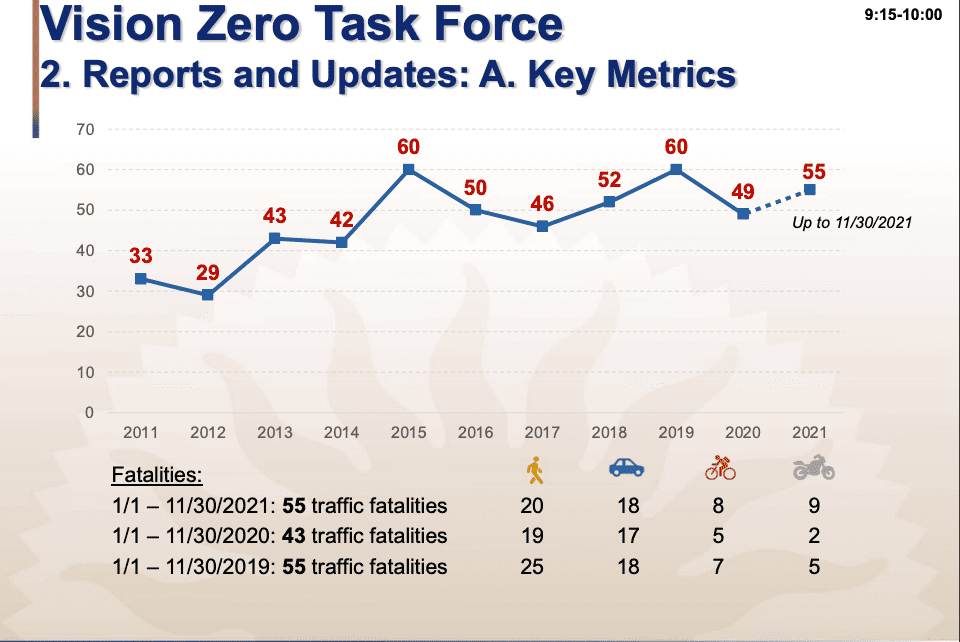 Lawmakers have focused on improving some of the more dangerous intersections in the city. In September, the San Jose City Council voted to install barriers on Monterey Road and Curtner Avenue, the site of seven car and pedestrian collisions this year. Monterey Road has nine of the 65 most dangerous intersections in San Jose, according to a 2019 study. Many of the city’s deadliest roads have at least three lanes and speed limits above 30 miles per hour.

With nine deaths in 2021 so far, San Jose seeks to reduce traffic deaths

Vision Zero Task Force members are also bolstering educational campaigns focused on children, and to let people know the risks of crossing streets in the dark. One challenge is getting adults to take public warnings seriously about something as mundane as walking across the street.

“How do you tell adults who have been crossing streets their whole life that they’re not being attentive enough?” Mintz-Roth said.

Residents applauded the task force for its efforts, but also asked officials to consider other ways to improve safety.

“Our streets are filled by speeders who speed through our neighborhood and have no regard for the safety of our residents,” said Rosalinda Aguilar, president of the Guadalupe Washington Neighborhood Association. She asked the task force to prioritize maintenance of speed monitor displays that fall into disuse or get covered up by trees.

Edgar Arellano, programs manager for pedestrian advocacy group California Walks, urged officials to seek data from Street Story, a tool created by UC Berkeley that allows people to document unreported crashes, near misses and other useful information that may not appear in police reports.

Cyclist Buki Wilson said he appreciates the city expanding its bike infrastructure over the past three years. But he noted drivers frequently merge into cycling lanes.

“That’s not typically safe,” he said. “I’ve actually had to move out of the lane to make accommodations for illegally parked cars.”

Robin Roemer, who helped lead a lengthy campaign to stop the Charcot Avenue extension in North San Jose, asked the task force to reconsider the target of its educational campaigns.

“Instead of trying to reach every pedestrian… I would suggest putting up signs saying, ‘Hey, drive slowly, pedestrians could be in the road,’” Roemer said. “Focus on the driver behavior here.”