ElectionsSanta Clara
by Natalie Hanson
Santa Clara Councilmember Anthony Becker is asking the city to address homophobic behavior targeted at him during the mayoral race. He is running against incumbent Lisa Gillmor. File Photo.

The Santa Clara mayoral race is turning ugly and life threatening for one candidate.

Councilmember and mayoral candidate Anthony Becker said in the past few months he has received death threats and been subjected to homophobic slurs, as the city’s first openly gay policymaker. He said his partner has also been harassed. Becker wants his opponent, incumbent Mayor Lisa Gillmor, to speak out and stop the discriminatory behavior against him and the LGBTQ community.

So far, Gillmor has been mum.

Becker said the primary culprit is Robert Haugh, whose blog—Santa Clara News Online—is often retweeted by the mayor. Comments from that blog have surfaced against Becker, including calling him the “monkeypox candidate.”

Bob O’Keefe, a former city council candidate endorsed by Gillmor, also made homophobic comments toward Becker that landed in Haugh’s blog. He referred to Becker as “low hanging fruit” during a city council meeting in February. This elicited multiple comments directed at Becker that later surfaced on Haugh’s blog, including one where an anonymous commenter said Becker is the “lowest hanging fruit” and “Dingle Berry” is a good fit.

“It comes from a right-wing fringe group that supports the mayor,” Becker told San José Spotlight. “(Gillmor) will never, ever denounce that blog. And what that tells me is that she is in association with a blog that is a safe space for homophobia and bigotry.”

Becker asked Gillmor to respond to homophobic comments from readers on Haugh’s blog at a Dec. 14 city council meeting, which she would not publicly admonish. Later that week, the mayor shared a post by Haugh who attacked Becker for his remarks in the meeting. Haugh’s post read: “City Councilman Anthony Becker Acts Like a ‘Bad Mall Santa’ at Last Santa Clara City Council Meeting of the Year.” 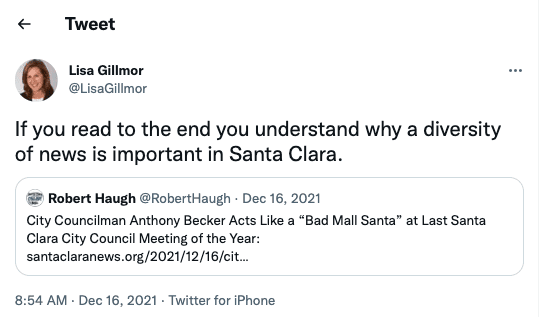 In addition to the website and Twitter harassment, Becker has received death threats over the last couple of months, which he reported to the police. He believes the threats are related to a comment from Burt Field, a city parks and recreation commissioner, who wants to recall all the councilmembers except for Councilmember Kathy Watanabe. Watanabe aligns with  Gillmor.

Field, who often writes for Haugh’s blog, wrote, “Doing something as public as a recall actually has a right way to do it, and a wrong way. Much like shooting a loaded gun. Ready, aim, fire sure sounds a whole lot better than ready, fire, aim.” Becker reported it to the Santa Clara Police Department, emails show.

Becker claims the police department did not take action and Field remains on the commission. Police Chief Pat Nikolai, who has historically allied with Gillmor, did not respond to requests for comment. Field declined to comment.

Vice Mayor Suds Jain told San José Spotlight when he tried to comment on Haugh’s blog, Haugh confirmed he moderates all submissions. Jain said Field is “an ardent supporter” of the mayor.

“The fact that (Haugh) allows homophobic things, when he says his (website) is moderated, implicates him,” Jain said. “There’s no way as public officials for us to fight this stuff, we pretty much have to take it. There’s no way to shut these people down because they have free speech rights.”

Haugh would not comment about people using his blog on social media to redirect nasty comments toward Becker.

“​​In the interest of free speech, I am pretty liberal in how I allow comments, including the ones that personally attack me,” he told San José Spotlight. “I do my best to reject inappropriate comments.”

Becker said the issue dates back to 2020. Councilmember Karen Hardy was unable to raise the Pride flag at a city ceremony, and Becker wanted to step in but was not invited to do so. Last spring when Becker asked about helping plan Pride, he was told it’s the mayor’s project, according to emails shared with San José Spotlight.

He added that Gillmor did not invite some local LGBTQ groups, like Silicon Valley Pride. The organization declined to comment on or verify this information.

“I included most if not all the individuals and organizations that Anthony Becker requested for our Santa Clara Pride Flag raising event at City Hall,” Gillmor told San José Spotlight.

Becker said Jain, Hardy and Councilmembers Kevin Park and Raj Chahal offered support after hearing slurs directed at him. He said he wishes the council would commit to a “teamwork exercise” on diversity and conflict management, beyond diversity training they take when elected—“or else, get a new mayor.”

“Seeing my council colleagues come up and support me like that and console me, that says a lot about their character and leadership,” he said. “They are real allies of the LGBTQ community.”