Coronavirus
by Lorraine Gabbert
Staff from the Santa Clara County Office of the Assessor tell the County Board of Supervisors they are concerned about safety at their workplace.

Workers at the Santa Clara County assessor’s office won a key battle Friday afternoon when they were all allowed to work from home following a decision by County Executive Jeff Smith.

Assessor Larry Stone had argued he wanted more workers to be in the office on rotation, a policy that prompted more than 150 workers to sign a petition claiming the office is unsafe and needs to shut down — a claim Stone called a lie.

“I can’t get the work done. He’s trying to manage my office for me and make decisions … how to deploy my staff,” Stone said about Smith. “I said, ‘Okay let’s make it really safe — it’s what the employees want anyway — and send them all home.’”

Mullissa Willette, an exemption investigator and union vice president, brought the petition to the Santa Clara County Board of Supervisors Aug. 11, saying the assessor’s office is putting the lives of workers and the public at risk because it is not in compliance with COVID-19 related safety orders. The petition asks employees be allowed to work from home.

“It was a complete fabrication what they said to the board,” said Stone. “This is political. It’s not about safety at all. People want to stay home. Some people function well working remotely and some people don’t. I need everybody to function well.”

As of Aug. 13, Willette said there were three confirmed cases of workers with COVID-19 in the office.

“I don’t want to witness anyone in the assessor’s office having their life altered or dying because they could have worked from home and they didn’t,” Willette said.

Stone said 75 people — 29% of the staff — were working on a rotational basis in the office. The longtime assessor wanted to increase it to 44% — 117 employees out of 260 — to increase productivity. Smith rejected that idea, prompting Stone to allow everyone to work from home as of Friday.

Stone said that due to teleworking, the office wasn’t able to process 36 corporate audits.

“Every day there are things that need to be done or reported,” Stone said. “Any time a disruption occurs, it jeopardizes the deadline.”

According to Stone, the office is responsible annually for about $5.1 billion of revenue, about $1.1 billion of which goes to the county. He said if his office failed to capture 20% of the usual revenue, it would result in a $170 million shortfall for the county, which already is facing a $350 million deficit.

“If I’m prevented from deploying my staff the way I need to to get my job done, then I’ll let them know … how much money we left on the table,” Stone said. “I’ll let school boards and the cities and everyone who depends on property tax revenue know what happened.”

Stone said the office was controlling the number of people in conference rooms, break rooms and bathrooms. The office also provided each employee with 450 square feet of personal space, while the public health order requires 250 square feet.

However, Willette said working in 3½-foot tall cubicles meant employees could not maintain a safe six-foot distance. She said workers were in close proximity walking down hallways, by printers and in the break rooms and rest rooms.

Willette said 117 people sharing single points of entry, elevators, restrooms and breakrooms was too many.

She added mask enforcement only happened within the past two weeks and that Stone at times forgot to wear a mask.

“Unfortunately, when our workers see him not wearing a mask,” Willette said, “it’s troubling to them.” 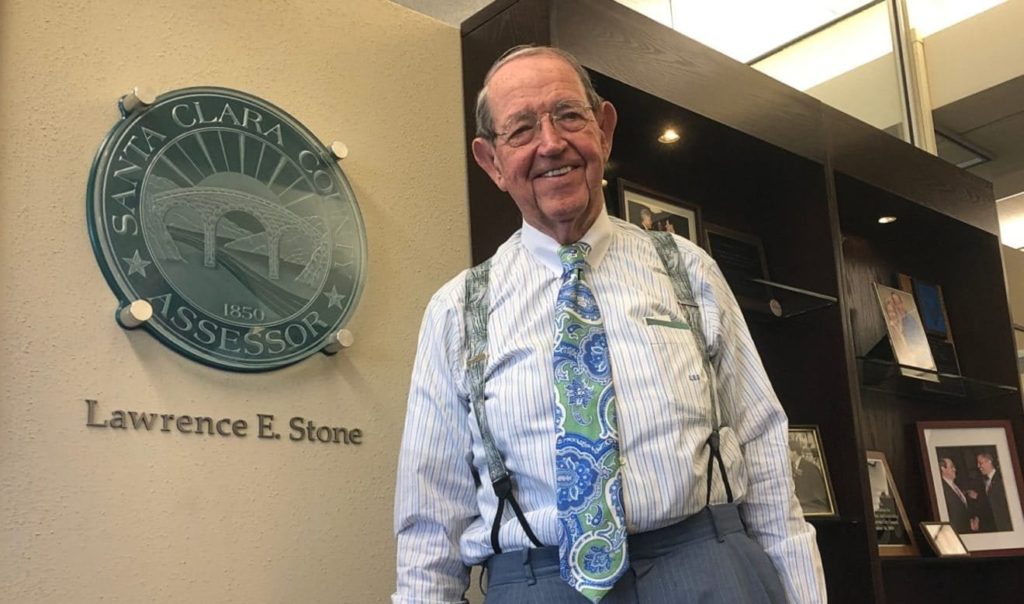 “That’s complete nonsense,” Stone told San José Spotlight. “We purchased 500 masks and 300 faceguards, and I wear a mask. If I’m in my individual office, I don’t wear a mask and nobody else is required to as long as we have social distancing. I have said, when you’re alone in your individual cubicle it’s not necessary to wear a mask.”

As far as public safety, Stone said people were able to make appointments online or at the screening area on the first floor. Once arriving at the office, customers and employees were required to wear masks, have an infrared temperature check and confirm they ddidn’t have COVID-19 related symptoms.

Stone said floor markings, signs about COVID-19, hand sanitizers and tissues were distributed throughout office. He also reduced the number of customer service windows from six to two to ensure social distancing.

But Willette said the public was able to show up without wearing a mask on the first floor, where a worker first tries to resolve the issue. They then rode the elevator before having a temperature check.

“The underlying principle is that members of the public shouldn’t be there, and neither should the workers,” Willette said. “These workers could be in the safest place, at home. That’s what the shelter-in place-order was for, staying home to flatten the curve.”

David Ginsborg, deputy assessor, said the issue was not whether people work in the office but whether the office is safe.

“Unfortunately, this is more an issue about teleworking than it is about whether the office is safe,” he said.

Roy Rivas, information systems analyst for the Office of the Assessor, said other assessor’s offices are providing service via phone, email and live chat. Rivas said many large assessor’s offices were closed, including those in Los Angeles and San Diego counties.

Stone said in a virtual meeting of assessors from 36 counties, only three or four offices were fully closed, including San Francisco and San Mateo.