A San Jose congressman’s campaign will pay $16,000 to a federal watchdog for using software that divulged donor history for fundraising purposes.

The Federal Elections Commission (FEC) reached a settlement with Rep. Ro Khanna‘s campaign to pay for using information from the commission’s database to send people emails during his 2014 and 2016 runs for Congress. That included taking information, such as donor history, from the FEC’s donor lists to ask for donations—something that violates federal law.

The FEC did not find any wrongdoing on Khanna’s part, and did not fine him personally.

Tech executive Steve Spinner, who Khanna tapped as campaign chair for his failed 2014 run and subsequent successful 2016 run, was instrumental in the email campaign. Spinner is the founder of Redwood City-based RevUp Software, whose software looks at donor history to assess who would support a campaign. Then it targets the individuals as potential donors. People on RevUp’s list are ranked by their likelihood of donating to a political cause, which campaigns use to ask for donations.

“I’m happy that the FEC addressed RevUp Software illegally using their data,” San Jose resident Glen Shaffer told San José Spotlight. Shaffer filed the original FEC complaint against Khanna in 2016. Shaffer and his wife were members of the Santa Clara County Democratic Club at the time of the complaint. “But there’s also the part where Ro Khanna was collecting other people’s info.”

Spinner licensed his software—often starting at $13,500 or more a pop, according to court documents—to representatives, senators and national committees on both sides of the aisle.

Spinner founded RevUp in 2014 and dissolved it in December 2019. According to court documents, Khanna continued to use the software until RevUp’s dissolution.

Khanna denies any wrongdoing and says the software’s use was within the FEC’s rules.

“There were hundreds of campaigns that used this RevUp software, including Democratic and Republican committees,” a spokesperson for Khanna’s campaign told San José Spotlight. “The committee did nothing wrong, but settled the matter to avoid litigation and administrative fees.”

Shaffer, a canvasser for then-South Bay Congressman Mike Honda’s campaign at the time, first raised the complaint after he discovered he was added to Khanna’s campaign email list. A Khanna official explained that Shaffer and other Honda supporters were added to the campaign list after Khanna’s personal Gmail account contacts were uploaded to the software by mistake.

Though Shaffer was promised he would get no more Khanna-related emails after a fix from the campaign, he says he still received them. Shaffer attributes the emails to RevUp, which reportedly tailors emails to users based on their interests and likes, according to a Bloomberg report.

For example, those who share a certain affinity—be it support for Honda or a shared ethnic background—are grouped together.

“He knew about all our mutual connections. How did he know all this stuff? It was running the email addresses through that software,” Shaffer joked. “It’s like Ro Khanna knows I drink too many margaritas and eat too much chocolate.”

Khanna won in 2016 against 16-year incumbent Honda in a close election. Khanna has since been re-elected handily in 2018 and 2020. 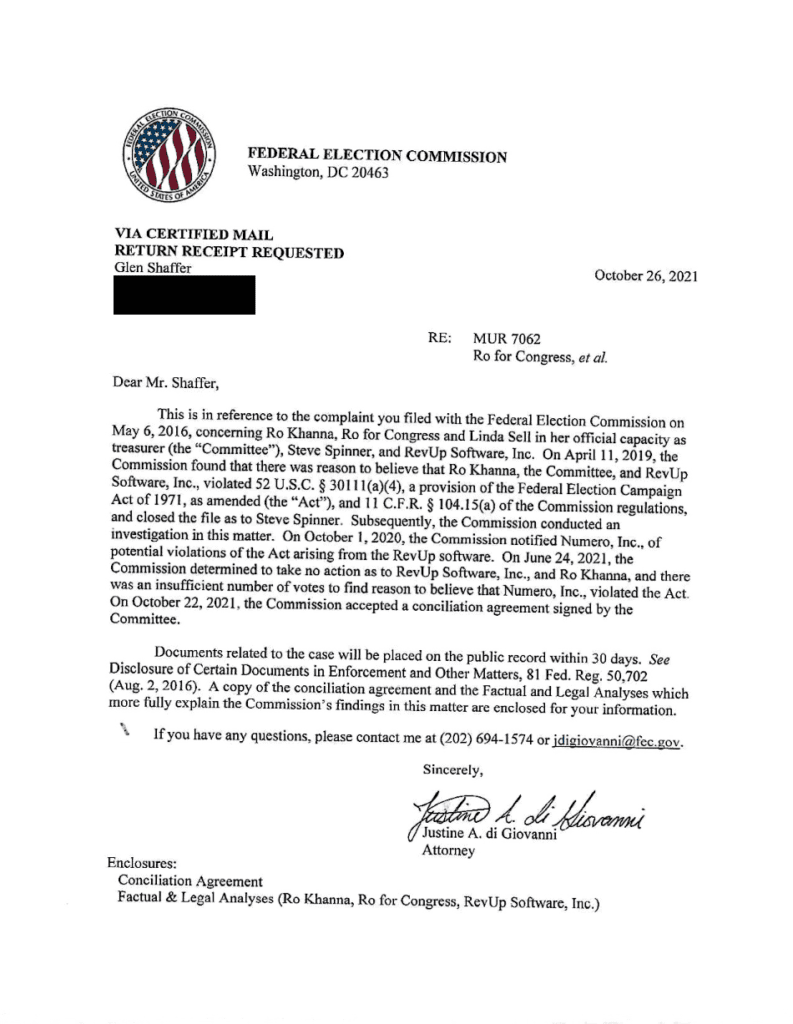