Silicon Valley politicians and community leaders reacted Tuesday to presumptive Democratic nominee Joe Biden’s selection of Sen. Kamala Harris to be his running mate, with many praising her career-long dedication to California and the Bay Area.

The former vice president announced his long-awaited and much-speculated vice presidential pick via text and a tweet. Harris, who dropped out of the presidential race in December, is the first Black woman and the first South Asian American woman to be picked for national office by a major party.

“Am thrilled to see my friend and our Senator, Kamala Harris, selected to be our next Vice-President — excellent choice!” wrote San Jose Mayor Sam Liccardo on Facebook.

“The fact that Democrats picked the daughter of Indian and Jamaican immigrants for VP tells you what we stand for,” Rep. Ro Khanna tweeted. “@KamalaHarris went to Howard and rose up through hard work. She represents a multi-racial, multi-cultural future for America.”

The fact that Democrats picked the daughter of Indian and Jamaican immigrants for VP tells you what we stand for.@KamalaHarris went to Howard and rose up through hard work.

She represents a multi-racial, multi-cultural future for America. 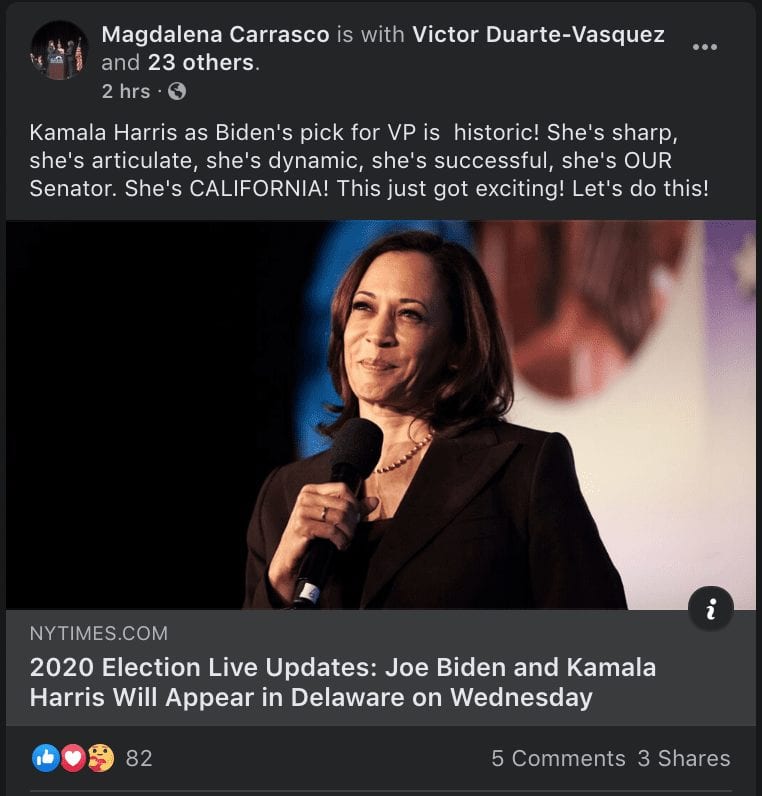 A first-term senator, Harris has a reputation as a sharp critic of the current administration. She previously served as San Francisco district attorney and California attorney general before being elected to the U.S. Senate. Harris made a short list that also included former National Security Adviser Susan Rice, Sen. Elizabeth Warren and Sen. Tammy Duckworth, among others.

San Jose Sen. Jim Beall, who has known Harris and her husband, Douglas Emhoff, for more than two decades, said they worked together on a number of issues, including programs to fight substance abuse and mental illness. He said he is thrilled.

“I’m also excited to see if there’s going to be a vice presidential debate because Kamala will tear (Mike) Pence to pieces,” Beall told San José Spotlight. “It’s wonderful news for the county and for our area.”

“Permanent politician Joe Biden continues to move further away from the moderate center with his choice of left-leaning Kamala Harris, who has compared (Immigration and Customs Enforcement) to the KKK,” Connolly said. “That rhetoric may play well among radicals in Portland but doesn’t appeal to most Americans.”

Harris’ long career in law enforcement came under fire during her presidential run, as many criticized her for being slow to adopt major reforms as attorney general. But her experience will only add to her ability to lead in the White House, Santa Clara County Democratic Party Chair Bill James said.

“With her background in criminal justice, we couldn’t have hoped for anybody who’s more knowledgeable of the system and its problems than Harris,” James told San José Spotlight. “She’ll be a great vice presidential candidate and California should be proud.”

Beall echoed the sentiment, praising Harris as a strong campaigner.

After the selection was announced, Harris tweeted: “Joe Biden can unify the American people because he’s spent his life fighting for us. And as president, he’ll build an America that lives up to our ideals. I’m honored to join him as our party’s nominee for vice president, and do what it takes to make him our commander-in-chief.”

The announcement came after more than 100 Black public figures signed an open letter urging Biden to choose a Black woman as his running mate. The decision also quickly received endorsements from top Democratic leaders, including former President Barack Obama and Secretary of State Hilary Clinton, as well as a jab from President Donald Trump.

“Voters rejected Harris: They smartly spotted a phony,” said an ad Trump tweeted. “But not Joe Biden. He’s not that smart,”