In an effort to disrupt the cycle of homelessness in California, another population may be getting guaranteed funding: low-income high school seniors.

State Sen. Dave Cortese’s recent bill SB 1341, which cleared the California Senate Education Committee last week, would provide $1,000 per month unconditionally to roughly 15,000 high school seniors who have experienced homelessness. This guaranteed income would start after graduation and last for about five months until they begin college, vocational training or enter the workforce.

The bill is in its preliminary phases, so it’s unclear how the program would be implemented, but the guaranteed Universal Basic Income (UBI) model has a proven track record of success. The program targets a specific demographic with a recurring amount of guaranteed monthly income.

Cortese was motivated to create the bill after reviewing the 2021 Silicon Valley Pain Index and other studies that found 11% of California State University students experience homelessness during their college career.

“I will always remember the surprise I felt seeing that 25% of the homeless population was under the age of 25,” Cortese told San José Spotlight. “Tens of thousands are students who are graduating seniors. It’s not as if they’re not trying to stay in school. They’re graduating, they’ve done nothing to deserve to be homeless. So what are we doing to get them out of homelessness?”

Implementing Cortese’s proposed plan is estimated to cost the state about $85 million—a price tag the senator says is worth it. He initially wanted to provide UBI to college students to support their educational efforts, but found $1,000 checks would affect a student’s federal financial aid.

“The irony of trying to help low-income college students with guaranteed income is you’ve actually potentially hurt them today,” Cortese said, adding his larger goal is to change how federal student aid is dispersed.

He said a program that would guarantee income during the gap between high school graduation and college would be a way to provide stability and enable students to attend college. Cortese said about 15% of of high school graduates who are accepted to college don’t attend due to the financial burden.

Universal basic income in San Jose? Some say it could be a game changer 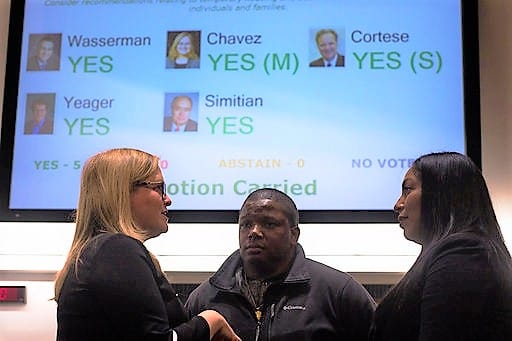 “We shore up their cash support so when they come into college, they’ll have a better chance to make a down payment on the rent and buy books,” Myers-Lipton told San José Spotlight. “You don’t know how many students tell me they’re sleeping in their cars, in the campus library, in the student union or on my bench right outside my office.”

It could also curb the number of college students who are food insecure—which is roughly 40%, Myers-Lipton said.

“These are the people that are going to be our doctors and our police officers and our teachers,” Myers-Lipton added. “It is economically smart to keep our folks in college and do everything we can to help with that. So it might be a little bit upfront, but the long term benefits economically are huge.”

Myers-Lipton was instrumental in drafting this recent legislation, working closely with Cortese to write it. But the state senator is no stranger to the UBI wave that has been gaining momentum.

Cortese launched a similar pilot program when he was a Santa Clara County supervisor, giving 72 transitional-aged foster youth countywide $1,000 a month. The program started in June 2020 and ran through August 2021. Then Cortese passed a similar statewide program a year later. The launch is still pending.

Cortese said locally, the impacts of universal basic income have been significant. More than half of the 72 participants have gone on to finish high school, college, vocational training or even a master’s program.

Melanie Jimenez Perez, who leads Santa Clara County’s UBI program, said the results have been so successful the county has extended the program for another year through August.

More than half of participants were also able to secure stable housing—alleviating a significant amount of stress, Perez said.

“Many of them signed a lease for the first time ever,” said Perez, adding 76% of their money went specifically to rent.

She said what the data does not show is participants feel more empowered and invest more in themselves.

“We are truly addressing inequities,” Perez said. “If we weren’t focusing on a specific population, we probably wouldn’t see as profound of an impact. High school seniors are a part of the fight.”