CoronavirusHealth
by Madelyn Reese
Santa Clara County health officials say they were taken by surprise by the state's announcement of how the COVID-19 vaccine will be administered. Photo by Vicente Vera.

Santa Clara County will not provide Good Samaritan any more doses of COVID-19 vaccine unless it follows the rules, a sanction issued by health officials after this news organization reported hospital leaders allowed an affluent school district to skip the line and get vaccinated ahead of seniors and other vulnerable populations.

“Good Samaritan’s actions are inconsistent with both the letter and spirit of the State’s direction on vaccine eligibility,” Santa Clara County COVID-19 testing officer Dr. Marty Fenstersheib wrote in a letter to the hospital’s leadership on Jan. 22. ”

Fenstersheib said the county will provide enough vaccine to cover second doses for people already vaccinated at Good Samaritan, but will withhold additional vaccine doses “unless and until Good Samaritan provides sufficient assurances” it will follow state and county rules for vaccine distribution.

As first reported by San José Spotlight on Friday, Los Gatos Union School District Superintendent Paul Johnson emailed teachers and staff telling them they can sign up to get a vaccine at Good Samaritan at the behest of the hospital’s chief operating officer.

Educators are not yet allowed to receive vaccines in Santa Clara County. The county follows state guidelines for vaccine distribution and barely has enough doses to vaccinate health care workers and people 75 and older. Good Samaritan itself reported to the county it is only vaccinating health care workers due to the shortage in vaccine supply.

Yet the staff at the Los Gatos school district, one of the most affluent in the county, was allowed to skip the line and sign up for vaccines as a reward for helping raise money for meals for hospital workers. Johnson encouraged teachers and staff to pretend to be health care workers when they sign up for a vaccine appointment — at the behest of the hospital’s top leadership. 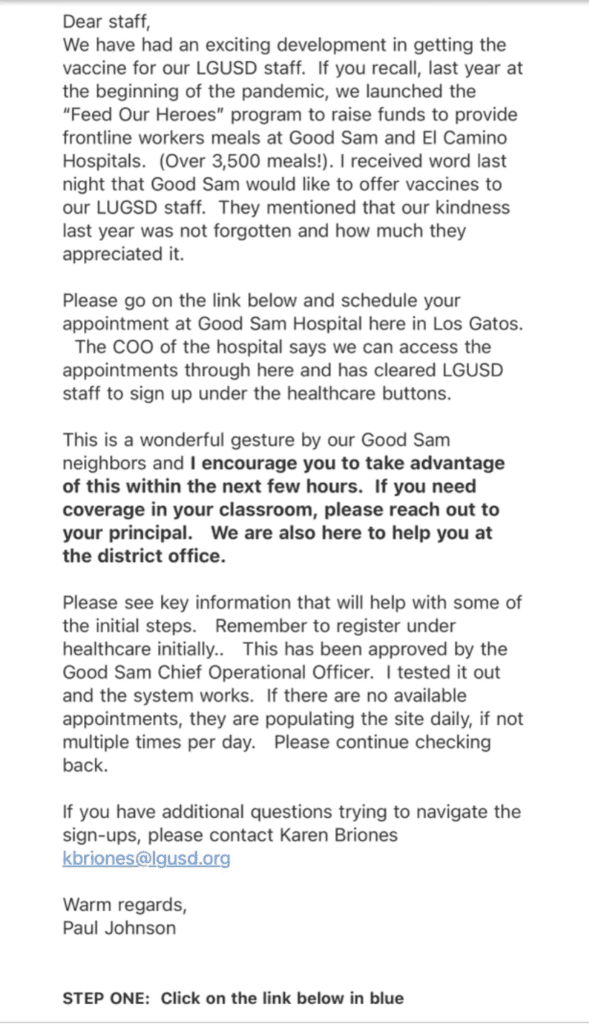 “As a result, Good Samaritan has not begun to broadly vaccinate persons 65 years of age and older, much less made focused and appropriate efforts to reach that group,” Fenstersheib wrote in his letter Friday. “Nonetheless, Good Samaritan offered to LGUSD that its staff, who are not health care workers, could make appointments and obtain vaccinations through Good Samaritan.”

Fenstersheib added that Good Samaritan’s actions are “problematic for multiple reasons,” including not adhering to state and county guidelines, and putting Los Gatos teachers and staff ahead of those in areas hit much harder by COVID-19.

“Good Samaritan’s decision to offer vaccination only to LGUSD staff also rewarded employees of a school district that had provided fundraising that assisted Good Samaritan employees, rather than prioritizing older educators or those from areas of the County with high prevalence of COVID-19,” Fenstersheib wrote.

The move left some teachers outraged.

R.J. Fisher Middle School teacher Jim Fredette asked board members during a Jan. 21 meeting to demand Johnson rescind the offer because it’s “unethical.” He pointed to the fact that staff had to lie and attest under penalty of perjury that they were health care workers when signing up for the shots.

“So this tumultuous episode in LGUSD history has reached its climax,” Fredette said. “While my 75-year-old Vietnam veteran father and 71-year old mother with metastatic breast cancer wait at home for appointments, district leadership has found a back door for Los Gatos teachers to receive vaccinations.”

The drive to reopen Los Gatos schools and “please the loudest parents,” Fredette said, have “broken our district leadership.”

Some board members, however, said they didn’t see anything unethical about the arrangement.

Los Gatos schools have not resumed in-person classes. The district has plans to open once cases in Santa Clara County fall below 25 cases per 100,000 residents. According to the state’s COVID-19 dashboard, the county averaged 67 cases per 100,000 this week.

Despite speculation from sources that Johnson sends his own kids to Los Gatos Union School District schools — potentially raising questions about whether he could personally gain from the move — the superintendent told San José Spotlight his children are adults.

But after the news broke Friday, Johnson sent a follow-up email to Los Gatos Union School District staff and teachers denying that the vaccinations had been part of a quid pro quo. Johnson’s original email cited the fundraiser as a reason school staff can get a vaccine now — because the hospital remembers their “kindness” in raising money for meals.

“In my email to you, I mentioned the service opportunity last year. (Feed Our Heroes) We did that out of the sincerity of our hearts for the medical frontline workers as part of a Los Gatos community-wide effort,” Johnson wrote. “We did not ‘give’ to ‘get.’ The Good Sam vaccination efforts are not tied to our service, and I’m sorry if this was miscommunicated.”

By only offering vaccines to a certain school district, Fenstersheib continued in his letter, the hospital created additional confusion over who is eligible for a vaccine right now. As a result, other educators now “incorrectly expect” that they will be able to get a vaccine through Good Samaritan or other hospitals in the county.

Good Samaritan Hospital CEO Joe DeSchryver said the decision to administer the vaccines was in “order to avoid wasting supply that was already thawed.”

“Subsequently, we realized we were in error and do sincerely apologize for any confusion this may have caused to our community and our colleagues,” DeSchryver. “We are committed to working with the county on a plan to assure we have clarity and are adhering to the state and county guidelines on vaccine eligibility, which we have done so prior to this isolated incident.”

DeSchryver said that the hospital was conducting an internal investigation “to ensure this does not happen again.”

The state earlier this month began vaccinating residents 65 and older, but health care providers in Santa Clara County, including Kaiser, are only vaccinating people 75 and up due to a vaccine shortage.

Fenstersheib finally laid out an ultimatum for Good Samaritan Hospital in his letter.