The H.G. Wade Warehouse caught fire in the Alviso district of San Jose on June 25. This made me think about another structure that is vulnerable to fire, the historic Church of Christ Scientist building.

It’s located just north of St. James Park and looks like a background building in a dystopian movie. Calling it blight would be kind at best — it’s an utter embarrassment to San Jose.

The historic building was due to be renovated per an agreement between Green Valley Corporation dba Barry Swenson Builder as approved in Dec. 2003, amended in Feb. 2009 and ultimately assigned to Fulton Street Ventures LLC in March 2017.

The building has gone from proposed renovated amenity of a housing development project called Park View Towers to a commodity that Green Valley Enterprises monetized for a large financial gain, all while the building has become a huge nuisance, blight and eyesore. Green Valley Enterprises paid $1.35 million (or $23.71 per square foot) for the property. They sold it for $8 million dollars in April 2017.

Let us be crystal clear who took over the proposed development project: Fulton Street Ventures.

Fulton Street Ventures is an entity managed by Z&L Properties. Z&L has a troubled track record in downtown San Jose development as demonstrated by its 188 West St. James project, formerly known as Silvery Towers. It’s been years since the project began and it’s unclear when it will be finished.

Z&L’s website states that it will begin sales in late summer 2019. If you don’t know why the property was rebranded to 188 West St. James, let me just show you the Google search suggestions that comes up when you type in Silvery Towers: 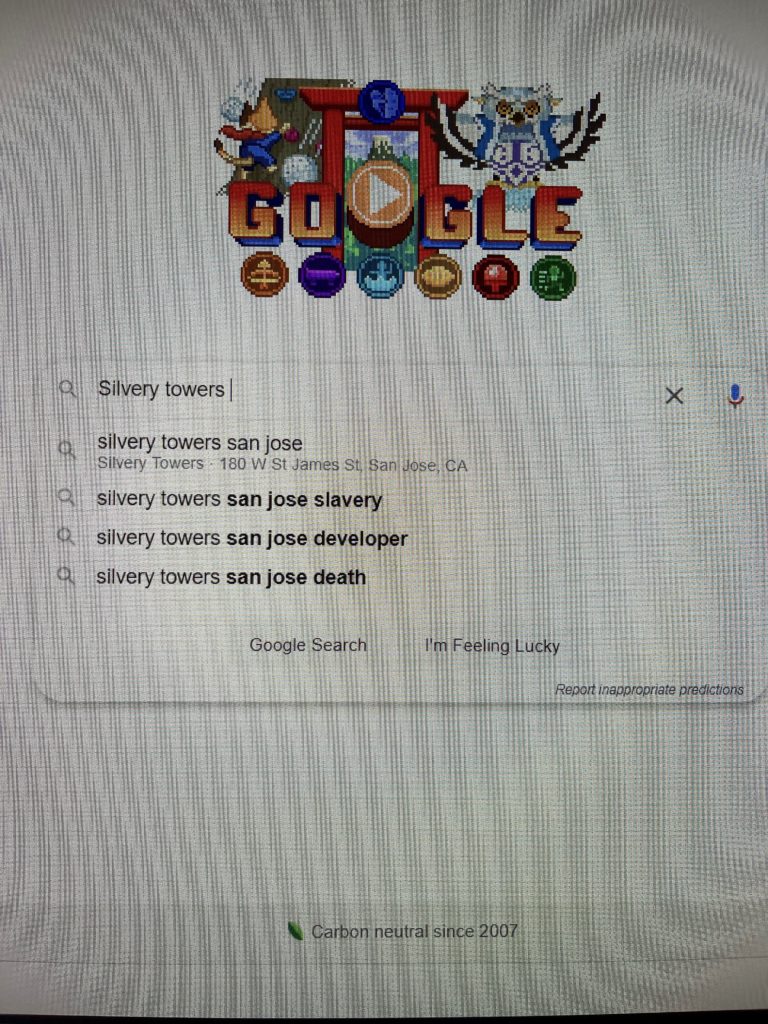 This same developer now has several properties under its control in downtown San Jose. Another development it owns is the former Greyhound bus terminal site.

The Greyhound site is located at 60 South Almaden Avenue and was purchased in April 2016. KT Properties under a single purpose entity bought the property from Greyhound Lines Inc. for $33.5 million, and then the same day sold it to Full Standard Properties for $39 million. That was for a property with approved development entitlements.

I researched the approvals for this property and per a permit adjustment application on Aug. 11, 2020, the final one-year extension was given. That means the site’s approvals are gone, meaning the value should be significantly lower. The application shows Full Standard Properties, LLC as the property owner and lists care of Z&L Properties.

Letting the value of the property diminish while being unable to begin construction is troubling to say the least. It’s another blighted property in danger of catching fire as vacant buildings are these days.

There is little the city can do on the Greyhound property. However, it has multiple options for applying pressure on the historic Church of Christ Scientist development site.

The site is still controlled by a legally binding agreement between Z&L and the city. As with most agreements, there are terms and conditions that each party must honor or one party becomes in default. At that time, the non-default party can pursue legal action or contractual remedies listed in the agreement. The agreement for the Church of Christ Scientist site required the developer to complete all development in five years.

Here is their development timeline from the document:

As you can see by its current condition and the lack of development, that timeline wasn’t executed. In the binding agreement between Z&L and the city, there is a repurchase document shown below. Here are the terms to exercise the right to repurchase: 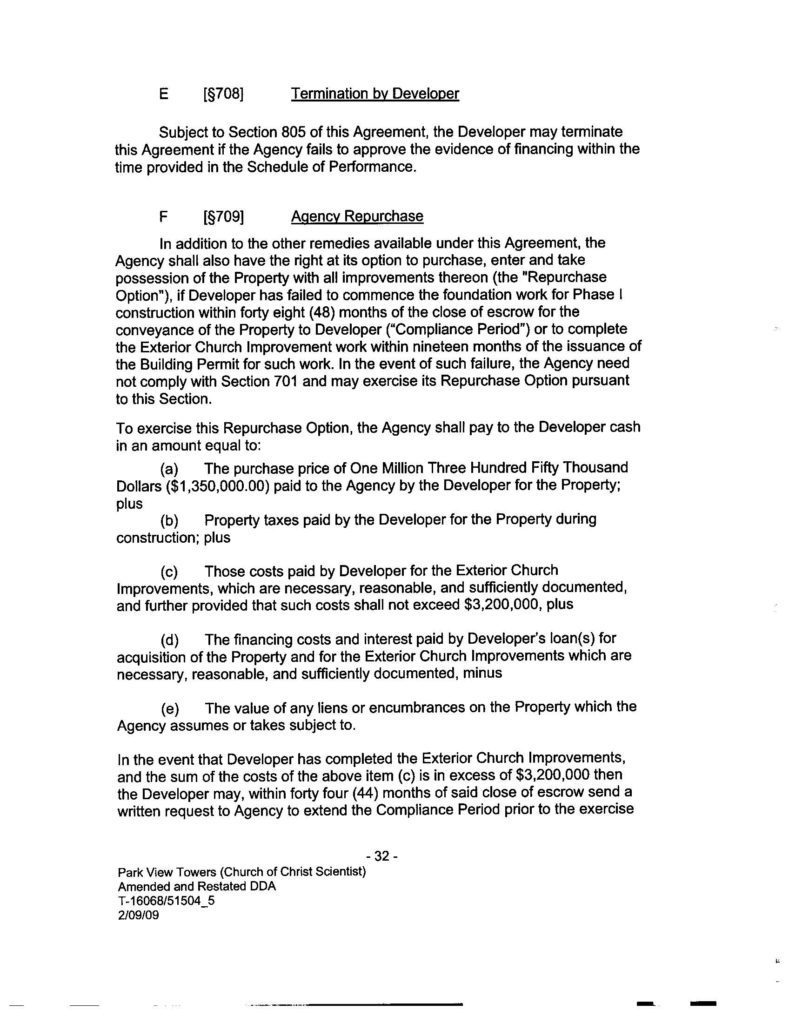 The other option available to the city is to revoke their Historic Preservation Permit Amendment. Item number 50 states: 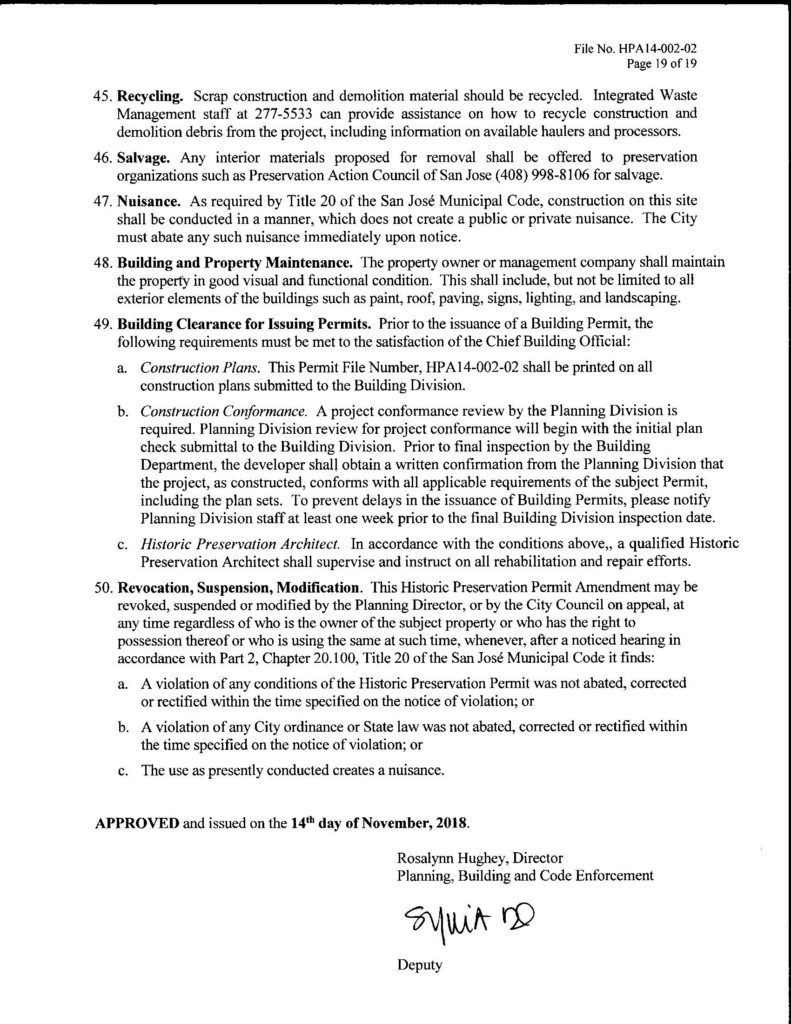 I personally believe that this property presently creates a nuisance. The city should notify Z&L that it’s considering options to either repurchase the property or explore revoking its Historic Preservation Permit Amendment.

San Jose should also consider creating a blight tax on large vacant parcels such as the Greyhound site. It’s not acceptable and something needs to be done. Oakland voters approved Measure W, the Oakland Vacant Property Tax, which establishes an annual tax of $3,000 to $6,000.

It is often discussed around San Jose that if Z&L doesn’t have any respect for the city, why are they still holding onto these properties? The progress of 188 West St. James does not provide any level of confidence that things will change soon on these two properties.

The fire danger on the historic Church of Christ Scientist building increases by the day. Over the last 20 years there have been four or so significant historic structures that caught fire. The H.G. Wade Warehouse is just the latest one that could have been avoided.

Demolition by neglect is happening right before our eyes. We need to stand up and tell Z&L it can’t do this to our community.