Housing
by Nadia Lopez
Workers at O'Connor Hospital say they feel disrespected by Santa Clara County, which bought the San Jose hospital and two others in Gilroy and Morgan Hill out of bankruptcy last year.

Among the millions of Americans to suffer through the 2008 financial crisis was an immigrant Vietnamese family living in San Jose’s Evergreen neighborhood, paying nearly $6,000 a month in mortgage to support two children.

The small business owners stashed away as much money as they could to afford the housing expenses at the beginning of every month, but eventually lost all of it to bankruptcy after the Great Recession went into full swing. Amidst the family’s financial troubles, the father — Cuong Truong — stopped going to the doctor for his annual exams, often having to choose between those visits and paying the mortgage.

And then in late 2011, an unexpected episode sent the family rushing to the emergency room.

“I could tell he was more frail but we didn’t know the reasons why,” said son Eddie Truong, who was a late teenager at the time. “We thought it was because he was overworked or stressed, and then one day he just started vomiting blood — a lot of blood.”

“He lived for another five years after that, but it’s heartbreaking to think about how he could be alive today if he had been diagnosed earlier,” added Truong. “I think back to that moment all of the time, what if my father had had health insurance or if we weren’t struggling so much as a working family. We were forced to make a decision between two things that everybody should have — health and housing.”

But what’s more important than health? According to a new study released this month, more than half of Americans would say it’s rent.

Ten years later, the burdens of the financial crisis are no longer affecting almost half of Americans, yet a new crisis is blowing up across cities all over the country — the housing crunch — and many are still choosing between paying rent or going to the doctor. The new survey indicated that about 54 percent of respondents said they had delayed medical care because they couldn’t afford it.

“No one should have to choose between paying rent and paying for health care,” said Laurel Blatchford, president of Enterprise Community Partners, the national nonprofit organization that put out the study, in a press release. “And yet, thousands of people make that difficult trade off every day. That’s wrong.”

According to the study, 83 percent of participants prioritized paying rent before anything else, 45 percent did not follow a treatment plan provided by a health care professional because it was too expensive and 31 percent delayed a routine check-up because they couldn’t afford it. 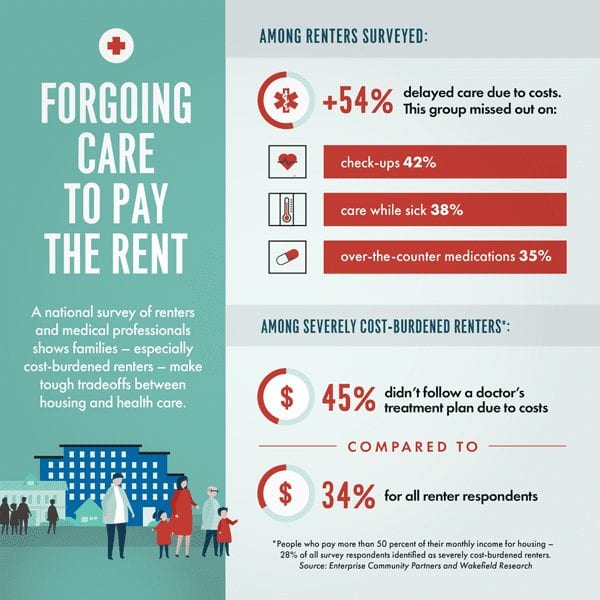 The study included 1,000 renters — half of which earned $50,000 a year, and 500 medical professionals that included doctors, nurses and physicians.

“The renters that we talked to consistently tell us that the thing they’re going to prioritize most is paying their rent,” said Brian Rahmer, Enterprise’s vice president of health and housing, told San José Spotlight. “We see quite often reports around higher levels of burnout, depression and anxiety. We’ve been understanding how unmet social needs for these patients contributes to these levels.”

When housing costs run high, renters are more likely to ration their medications or skip them all together, added Rahmer, especially among diabetics as insulin costs continue to rise. And the tolls continue to increase, as 89 percent report that “financial stress is the issue in their lives worst for their mental health.”

In Santa Clara County, almost 20 percent of households spend at least half of their income or more on housing, according to a 2019 county rankings report.

While homeowners have experienced a decrease in housing burdens, costs have not improved for renters. Renters are at a higher risk for health care challenges as these households are “associated with more food insecurity, more child poverty, and more people in fair or poor health.”

At the state level, many governors are looking at ways to contain health care costs, which according to Rahmer, continue to soar. But the real solutions are grounded in providing safe and secure housing stability.

At the local level that’s what advocates and policymakers are trying to do, by building affordable, mixed-use housing projects to address Silicon Valley’s growing need for homes, in an effort to curb homelessness and reduce the effects of displacement.

Many of these efforts have been funded by Measure A — a $950 million affordable housing bond –intended to build 4,800 units of housing in Santa Clara County within ten years. According to the county’s Office of Supportive Housing, 1416 of those units are in the works since December of last year.

“A key part of health is health prevention,” Truong said. “When the person can’t understand when they’re sick because it’s too late, that’s when it becomes a horrible moment, and I think back to that moment all of the time.

“Health and housing security are the very pillars of anybody’s needs,” added Truong. “Nobody should have to choose between priorities that are deeply-rooted in their wellbeing. All roads lead back to housing when it comes to our issues and the challenges we face today.”