While some outside the city might be surprised by San Jose placing in the top 10 most diverse American cities, for people living in San Jose it’s a fact of life.

A new study from finance website WalletHub found that San Jose is the 8th most diverse city when looking at the 500 largest cities in the United States.

San Jose was one of two California cities to rank in the top ten most diverse cities in America — beating out its famous neighbor to the north, San Francisco.

“I think San Jose has always had a very diverse population because of our agricultural history, so we definitely have a lot more Latino culture, that’s why Chicano history is so big here,” said Frances Wong, director of communications for Team San Jose. “With Little Saigon, we have the largest Vietnamese population outside of Vietnam.”

The city jumped up the rankings compared to WalletHub’s 2018 Most Diverse Cities list where it was ranked at No.16, although the previous year’s list used a different set of metrics including categories like “socioeconomic diversity” and religious diversity.

San Jose came in just behind Oakland, which snagged the No. 7 spot on the list of America’s most diverse cities. It also scored second highest in just the linguistic diversity metric making it the highest scoring California city in that category and losing out only to Jersey City for first place.

“San Jose has always been diverse and I think the percentages of diversities change through economic cycles and history,” Wong added. “With the Silicon Valley tech boom, we see a lot more residents of Indian and Asian descent coming to San Jose.” 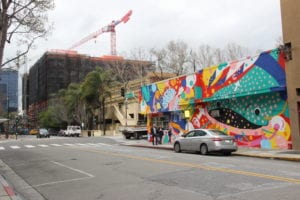 According to the study, the two largest groups in the city are Asian-Americans, making up 34.5 percent of the population, and Hispanic and Latinos making up 32.2 percent.

Though San Francisco may be more well known around the world, it’s not as worldly.  San Jose beat out San Francisco which barely missed the top ten, landing in 11th place.

Gordon Douglas, assistant professor of urban and regional planning and director of the Institute of Metropolitan Studies at San Jose University, said that San Jose has vibrant immigrant neighborhoods throughout the city, though it hasn’t always been recognized for them compared to San Francisco.

He said areas like Japantown, East Santa Clara Street and Luna Park, known to residents as the Northside, have their own unique feel to them representative of the immigrants who settled in them.

“There’s a stretch of Willow called ‘Calle Willow,’ Douglas said. “That’s a Latino shopping district with an old beautiful neighborhood around it. That area is beginning to gentrify because it’s close to downtown.