The San Francisco 49ers are refusing to meet with Santa Clara’s city attorney after his “wild” tirade during a recent meeting.

The tense exchange—which unfolded over a recent Zoom call—ended with Santa Clara City Attorney Brian Doyle saying the team wanted him to “sleep with the fishes” and questioning the “thugs” team officials work for. It’s the latest in a series of high-profile squabbles between the NFL team and the city.

After the Zoom call, Hannah Gordon, general counsel for the NFL franchise, sent a letter to City Manager Deanna Santana saying the 49ers will no longer attend meetings with Doyle. She said the team has a workplace policy against harassment and his recent behavior “has crossed a line where we can no longer justify sending employees into this environment.”

“The City Attorney gave a tirade orally…that was so wild, unstable, and suggestive of violence that subjecting 49ers employees to Mr. Doyle any further would violate our commitment to protection from abusive conduct,” Gordon wrote in the April 15 letter. 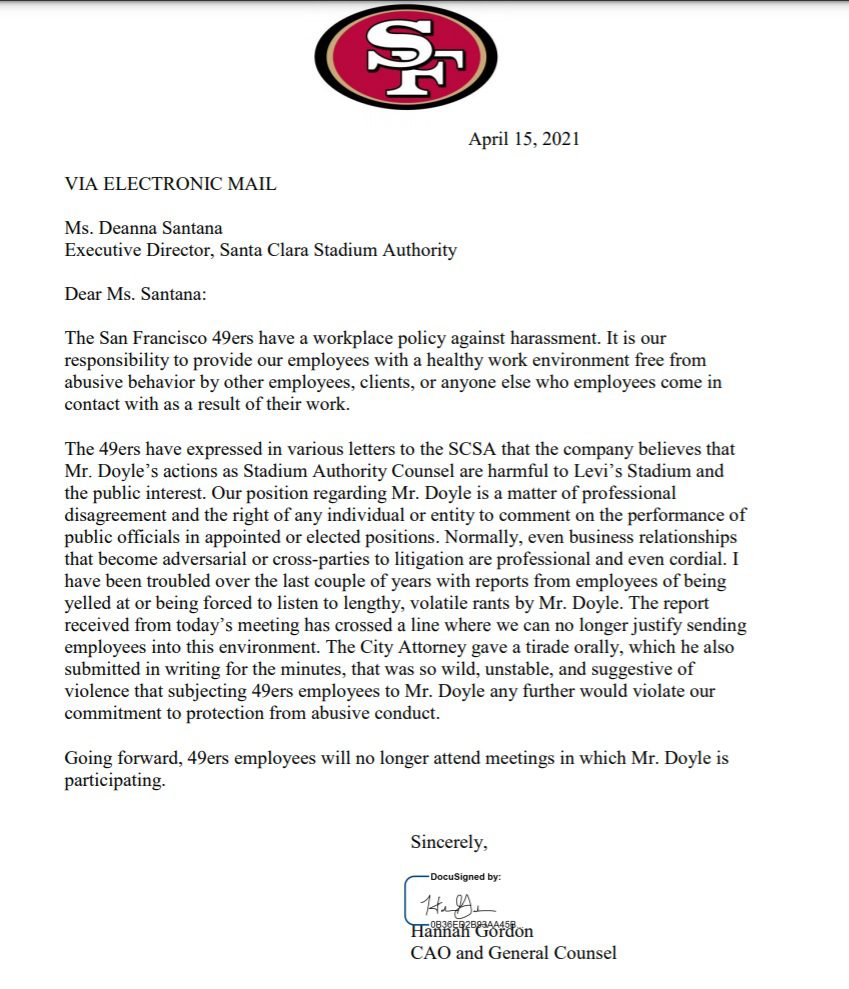 In the letter, Gordon said she considers Doyle’s actions “harmful to Levi’s Stadium and the public interest” and has been troubled during the last couple of years with reports from employees of being yelled at or “forced to listen to lengthy, volatile rants” by Doyle.

Doyle fired back by drafting his own memo to city councilmembers saying he did not go on a tirade, but was troubled by reports that team officials allegedly told Councilmember Suds Jain they “wanted him gone.”

He claims in the letter his wife became fearful the Niners would “do us physical harm” and insisted he contact law enforcement.

“As I am not the type of person who takes threats lightly, I had to let the 49ers know that they do not intimidate me with these types of threats,” he wrote in the letter. “I have learned that the best way to deal with people who make threats is to call a threat for what it is, and that is what I did.” 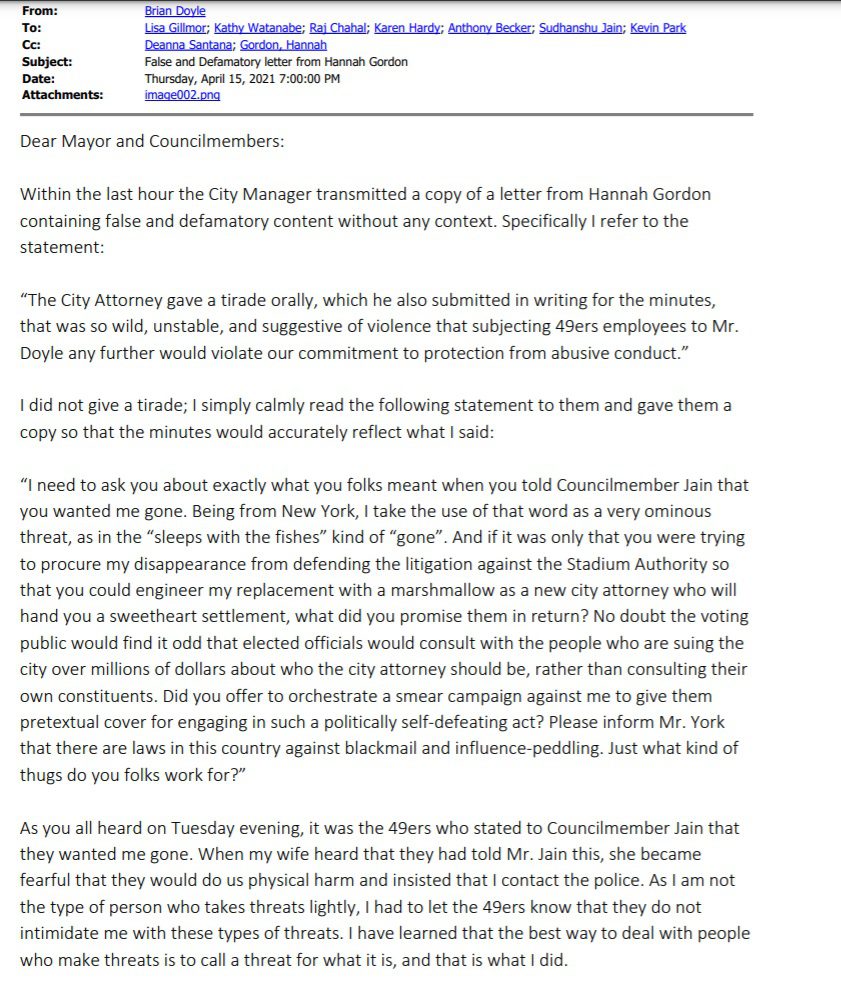 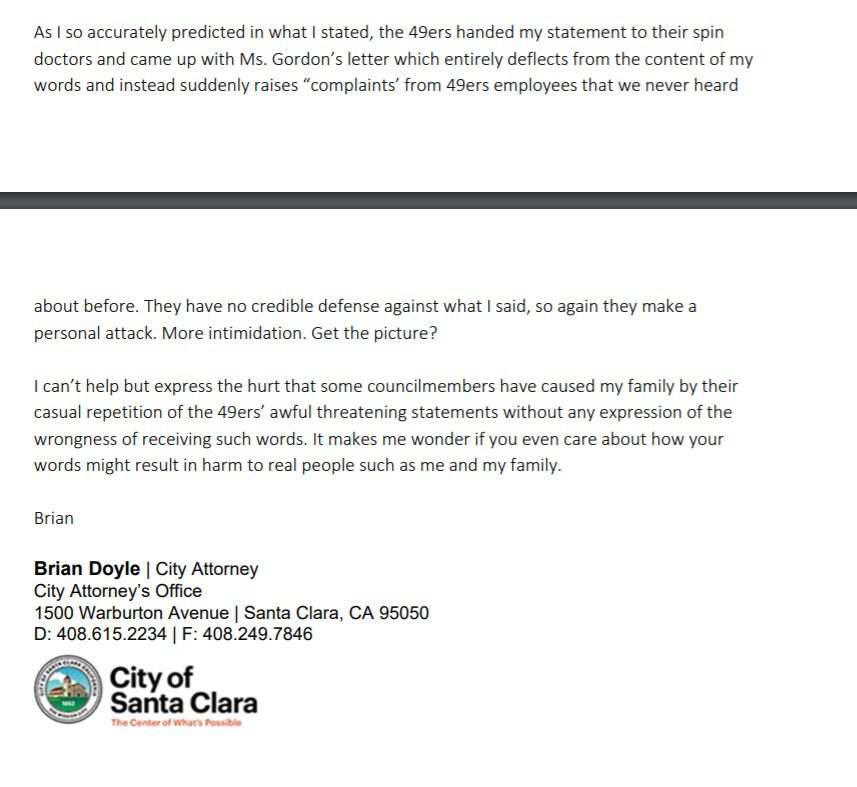 Doyle told San José Spotlight on Thursday that 49ers owner Jed York “got upset at my airing his team’s dirty tactics” and orchestrated the letter.

Jain insists he did not intend any physical harm to the city attorney.

“I guess my choice of words was not quite appropriate,” Jain told San José Spotlight on Wednesday. “I had no idea that anyone would construe them to be physical threats. I thought they were only employment related.”

Doyle replied that he took the words as a threat because “that’s what anyone from New York would think.”

“I have suffered very real physical and spiritual harm through the stress that the weekly Spanish inquisition sessions by the Council have caused,” Doyle wrote in a letter. “All I ask is that you give me a chance.”

Doyle is also under investigation by a third-party attorney after several internal complaints were made against him. He’s also under fire for spending millions of dollars appealing a Voting Rights Act case, which recently was settled against the city.

Santana, the city manager, defended Doyle. She sent a letter to the NFL team saying Doyle behaved in a calm manner during the Zoom meeting in question.

“I was in attendance at that meeting and can confirm that Brian made comments in a non-tirade manner,” said Santana, adding that one of the team’s executives made abusive and demeaning comments making city staff uncomfortable. “I respectfully ask that you use your expressed responsibility for the workplace to hold him to that same standard.”