San Jose Mayor Sam Liccardo compared racist cops to teachers in a now-deleted tweet as calls to defund the police intensified after Facebook posts made by active and retired police officers were exposed by a blogger.

In a now-deleted tweet, Liccardo responded to a tweet from Sajid Khan — a public defender who recently became the target of DA Jeff Rosen over fiery blog posts that demanded criminal justice reform — who said the racist Facebook posts illustrate the need to defund police.

Liccardo, who has dismissed pleas to defund police and instead called for reforms, tweeted a reply: “And when teachers are caught saying vile things, do we defund the schools, or fire the teachers responsible?” 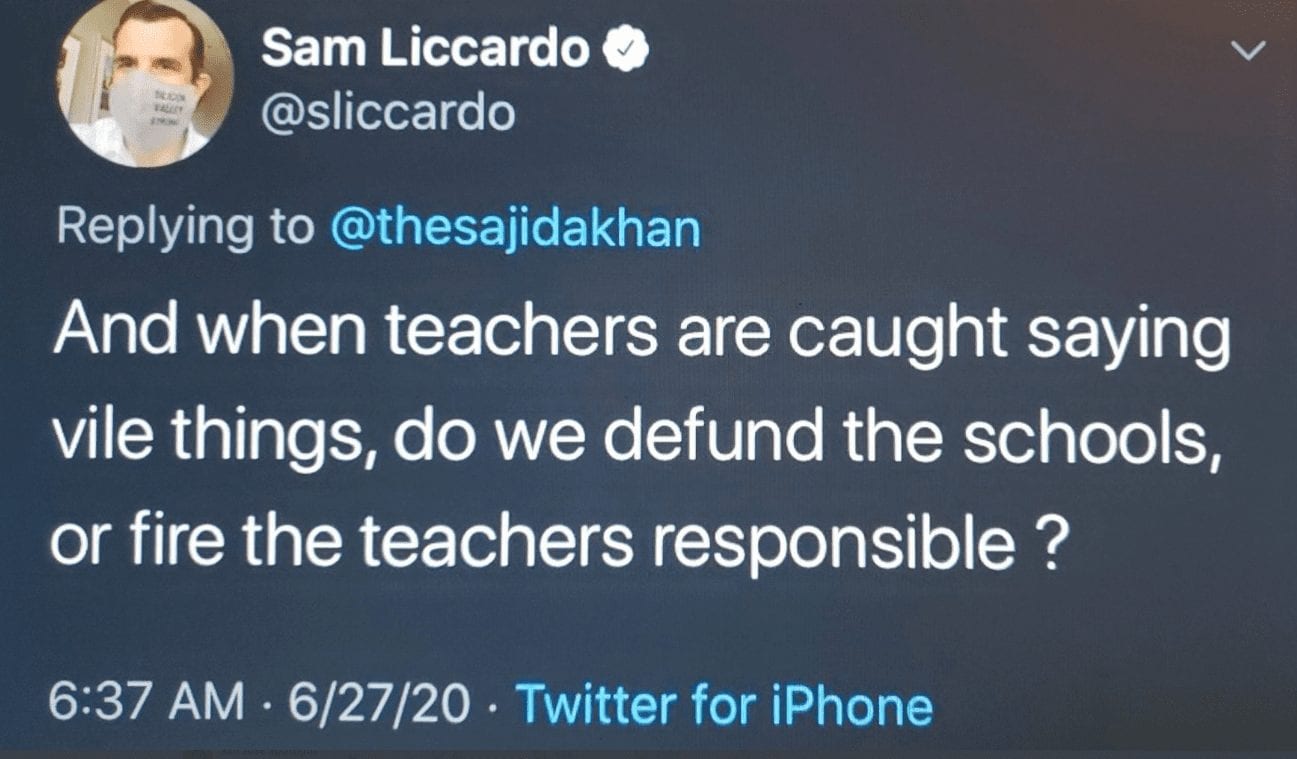 “Mr. Mayor, with all due respect, teachers don’t have the power to strike down a life strapped to their hips at all times and the backing of the state to do so. Surely you can’t be suggesting the responsibility of the two are equal,” Glover tweeted.

“Probably not a good look to go after teachers,” Sparky Harlan, CEO of the Bill Wilson Center, chimed in.

The mayor responded by deleting the tweet, though he later explained the rationale to Glover who called him out on it.

.@sliccardo is there a particular reason this tweet was deleted? https://t.co/fpEvyd4gi3

“Julian, your point is well taken — the analogy wasn’t apt, so I took it down, because it was distracting from the focus of concern. In my view, that concern should be on firing racist cops, and reforming any elements of police culture that coddle racism,” Liccardo replied. “But we still need to acknowledge that if we’re seeking to address systemic racism in all of our institutions, we’ll need many more tools in our toolbox than merely to ‘defund.'”

Khan on Saturday joined a chorus of others renewing calls to defund San Jose police after a Medium blogger revealed racist posts on a private Facebook page by current and former officers that mocked Muslims and the Black Lives Matter movement.

“An organization that fosters and shields people within its ranks that maintain these perspectives is not worthy of such a massive chunk of our city’s budget and surely cannot be trusted to serve and protect all within our community,” Khan tweeted.

Liccardo on Friday called for a “full investigation” and termination of the officers who posted racist, anti-Muslim remarks. But, he added, changes must be made to the arbitration process that allows some officers — including Phil White in 2016 — to get their jobs back.

“As I articulated in my police reform proposal this week, I will also continue to push for changes to the disciplinary process that currently allows unaccountable arbitrators to reverse termination decisions of the chief (as happened in 2016) without court review, and I will push for independent investigation of all racially discriminatory conduct,” he said in a statement. “This is precisely why these reforms are so important.”