Santa Clara has been investigating its city attorney for alleged misconduct for at least four months now—but the city won’t say how much the probe will cost, when it’ll be done or whether it will be released. Instead they are referring those questions to an outside law firm, which denied them on behalf of the city.

But details of the investigation have been kept under wraps, though Doyle is a controversial figure who has drawn strong criticism for his handling of a California Voting Rights Act lawsuit and litigation with the San Francisco 49ers.

Santa Clara spokesperson Lon Peterson told San José Spotlight the city sent the records request to law firm Liebert Cassidy Whitmore, which is handling the probe of the city attorney. The firm issued a letter Aug. 19 with a blanket denial of all requested records and information.

“Legal services agreements without outside counsel are confidential attorney-client privileged communications,” the letter says. “As a result, these records are exempt from disclosure under the (California Public Records Act) and will not be produced by the city in response to your request.”

The letter also shot down questions about the investigation, including whether it will be made public and how much it will cost, noting that the state public records act does not obligate a public agency to respond to such inquiries.

Morin Jacob, a managing partner at Liebert Cassidy Whitmore who sent the letter, did not respond to a request for comment Tuesday.

Liebert Cassidy Whitmore is an employment firm that specializes in assisting local governments in California. In 2019, the county counsel for Humboldt County filed a lawsuit against the firm and two county officials after he was allegedly pushed out of office for exposing excessive billing practices.

San Jose attorney James McManis said the fee agreement between Santa Clara and its law firm is protected as privileged communication, but he doesn’t see why Santa Clara can’t turn over the other information requested by San José Spotlight, such as the the status of the investigation, how much it will cost and whether the results will be made public. He couldn’t speak to why the city asked its outside law firm to address the public records request.

“The whole thing with the Public Records Act—the cities, the counties, all government entities—they hate it,” McManis said. “They like to operate in secrecy. And they don’t like having to disclose anything.”

Santa Clara was recently criticized for its lack of transparency with legal expenditures. Unlike San Jose, which has a web portal for residents to see the city’s payments for outside legal services, Santa Clara redacts information about the legal vendors it employs on its bills and claims reports. 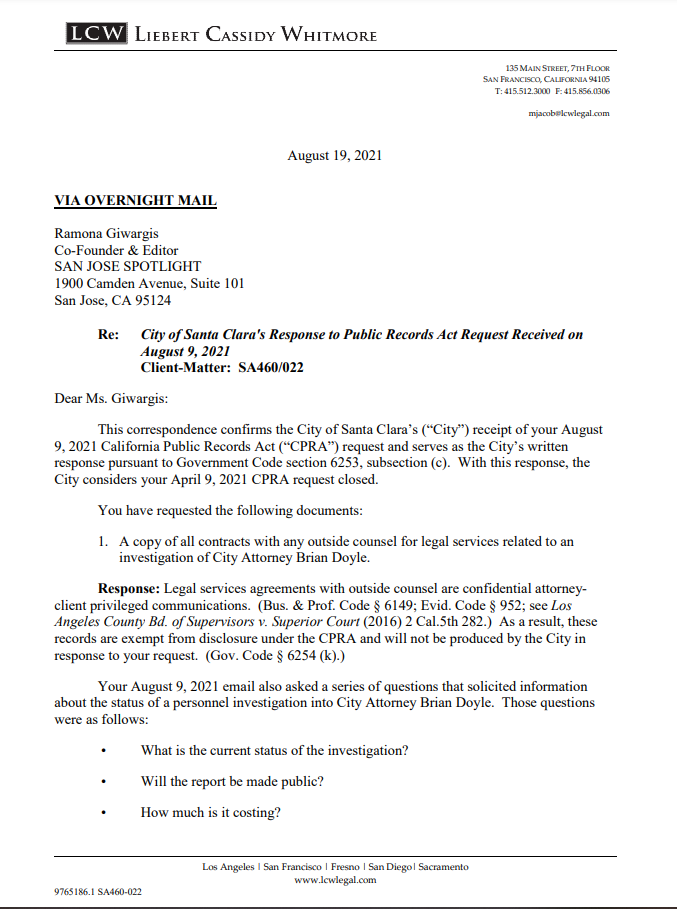 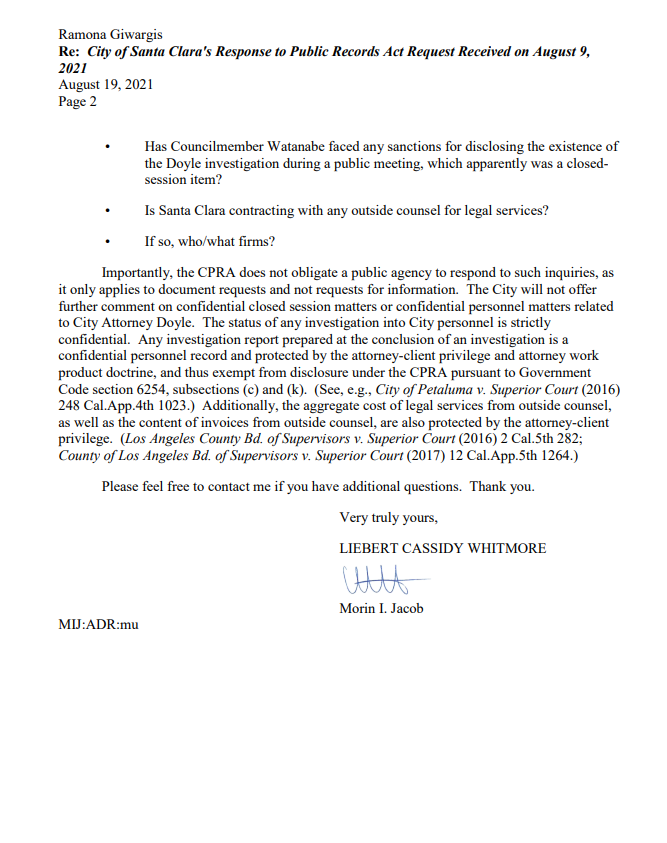