Columns
by Bob Staedler
A San Jose home going through renovations is pictured in this file photo.

San Jose has moved past a crossroads and now faces a staggering housing cliff.

On Dec. 16, 2021, the Association of Bay Area Governments adopted the final Regional Housing Needs Allocation (RHNA) and the California Housing Community Development Department has determined San Jose must plan for 62,200 housing units from 2023 to 2031.  The Bay Area must plan for 441,176 housing units over the same time period.

Here is the breakdown:

If you would like to get into the weeds, here is the report. And here is a chart showing how the total jurisdiction allocation is calculated: 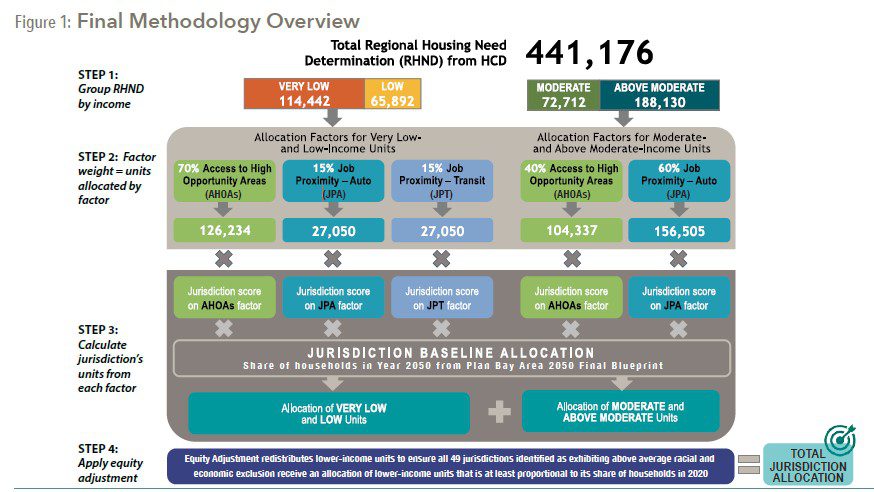 Using the allocation calculation above, San Jose needs to build 62,200 housing units. The affordability split is below:

You are probably asking yourself, what was last cycle’s allocation? It was only 35,080 housing units. Hate to break it to everyone, but we didn’t hit that number—nowhere close.

Digging through the city’s website, I found an old production report covering July 1, 2019 through June 30, 2020 that shows there were 1,539 units completed, under construction or entitled and another 3,977 prospective units to be entitled and added to the pipeline. According to this report, there are 20,915 income-restricted affordable units in San Jose’s housing stock.

San Jose’s Housing and Development Policy can’t handle the new number, the old number, or any number that will make any dent in the current housing tragedy. The old trope of San Jose being a jobs-poor city, that we can’t afford to build on any commercial property, is simply failing on every level. When Google’s Downtown West project was being considered, the Office of Economic Development stated that the tens of thousands of jobs will not move the housing/jobs needle.

Shouldn’t the city put away the old basic algebra and graduate to calculus on this issue? How much is it costing the city to not provide enough housing?

The human toll is immeasurable: homelessness, hours-long commutes, young people being forced out of the area and more. We have seen sites like the old Guitar Center on Bascom Avenue be approved for affordable housing. There are vacant retail sites that will never reopen due to requirements such as Title 24. The nature of certain jobs and the evolution of the online shopping environment needs to be accepted as a long-term reality. If you doubt that this is true, look at the Fry’s Electronics sites.

Let’s think bigger and allow for development projects that create larger amounts of housing per project. The fight over Opportunity Housing and the bureaucratic nightmare that is COPA need to be put aside. Can San Jose meet the moment and not let the current housing failure become the excuse for not meeting our RHNA numbers? The reality is that the next mayor we elect will more than likely have to be the one to change existing policies and direction.

I have hope that an evolution of thinking can occur, onward and upward.

Zisser: Ignorance and arrogance prevail in vote to build jail

Bramson: The bridge from shelter to home