Hunter Storm Development started construction this week on the next two buildings at its massive Coleman Highline office development in San Jose, but the groundbreaking is especially significant this time around in the multi-phase development.

The office project, which will span as much as 2.2 million square feet, is now part of something larger: a massive new transit village that spans across the San Jose border into Santa Clara, where the developer recently also locked in approvals to build 1,565 new homes alongside a spate of retail and green space in a project known as Gateway Crossings.

“When we look at the definition of transit-oriented development, this could be in the dictionary,” Josh Rupert, director of development for Hunter Storm, said in an interview this week. “We hit every usage and we look at each portion as how is it accretive into the aggregate? … While they are separate projects, we consider them as one.” 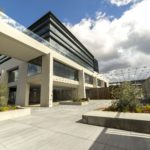 Coleman Highline is slated to include up to 2.2 million square feet of space, including office, retail and amenities space. The development is part of a larger "transit village" that spans across the San Jose and Santa Clara border. Image courtesy of Hunter Storm Development 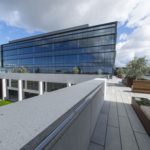 Coleman Highline is named for its third-floor, outdoor walkway that connects some of the buildings on the San Jose office campus. It is inspired by the High Line Park in New York. Image courtesy of Hunter Storm Development 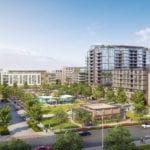 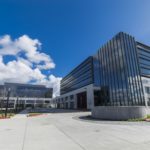 A view of two completed buildings at Coleman Highline, where streaming company Roku and Verizon Media will locate their headquarters. Image courtesy of Hunter Storm Development 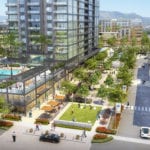 A view of a passeo at Gateway Crossings. Image courtesy of Hunter Storm Development 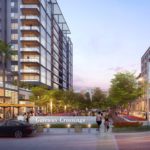 The Cupertino-based developer has owned much of the land set to become the sprawling transit village on the border of San Jose and Santa Clara for more than a decade. It has spent years working through the complications of trying to build a cohesive transit village that spills over the border of two cities with different goals and timelines that are frequently at odds.

The most complex part of building a sprawling village over the border of two cities is not navigating street grids between the cities or traffic mitigation efforts, a hot topic throughout the car-congested Bay Area.

Rather, the most complicated part was permitting, said Curtis Leigh, a partner with Hunter Storm Development.

“The part where we have a structure that straddles that line (between San Jose and Santa Clara), that’s been a little tricky because one city has to allow the other city to plan-check it and give you your building permit,” he said. “But the overall master plan design was not an issue because both cities wanted them to work together.”

Construction on Coleman Highline is already well underway in San Jose while Hunter Storm aims to break ground next year on Gateway Crossings.

The developments sit near Caltrain, VTA and will eventually be along the extended BART line, linking the two developments to “anywhere in the Bay Area,” Rupert said.

“These projects will allow employees the opportunity to work, shop and play where they live, while the robust transit connections will make this a convenient destination for those from around the Bay Area and beyond,” said Deke Hunter, managing partner and president of Hunter Properties, which is associated with Hunter Storm Development.

Of the up to 2.2 million square feet of office space that could be built at Coleman Highline, about 640,000 square feet has already been taken by Verizon Wireless.

The telecommunications company said it will co-develop and lease to purchase three buildings on the site, including an office building, an amenities property and a small welcome center. Work on that portion of the project started this week.

By fall 2021, the Verizon Media team will move into what the tech company is calling a new “innovation hub” on the site, bringing with it 3,400 employees.

But Leigh said the developer’s approvals for the project allow the company to nix a hotel and some of the retail space in favor of office space. That would bring the office portion of the development up to 2.2 million square feet.

Meanwhile, the 21.4-acre Gateway Crossings project will be built in two phases. In all, the development on the Santa Clara side of the border will include 1,565 residential units — including 157 affordable homes — alongside 45,000 square feet of retail space and nearly 3 acres of park land.

The project will also come with a 225-room full-service hotel, which was moved from the San Jose side to Santa Clara due to requests from Santa Clara city officials, who wanted the boon of tax dollars that hotel properties bring. Today the property is primarily vacant land long zoned for light industrial uses.

Hunter Storm has gone back to the drawing board to adjust the Gateway Crossings proposal multiple times over the past year, even after getting a unanimous approval for the project from Santa Clara’s Planning Commission last November. It ultimately got the City Council’s stamp of approval on a revised project in July.

The developer added more retail space and pop-up vendors to the project. It also offered up a nearly free 35-year lease with the Police Activities League for a 7,000-square-foot indoor space to host programs for local kids.

And now that the Hunter Storm has all of its approvals locked in place, it’s moving full force ahead, Rupert said.

“Hopefully, within 24 to 36 months, we’ve got a residential building up and the hotel started as well as building two,” he said. “So we don’t have any intention on slowing down.”